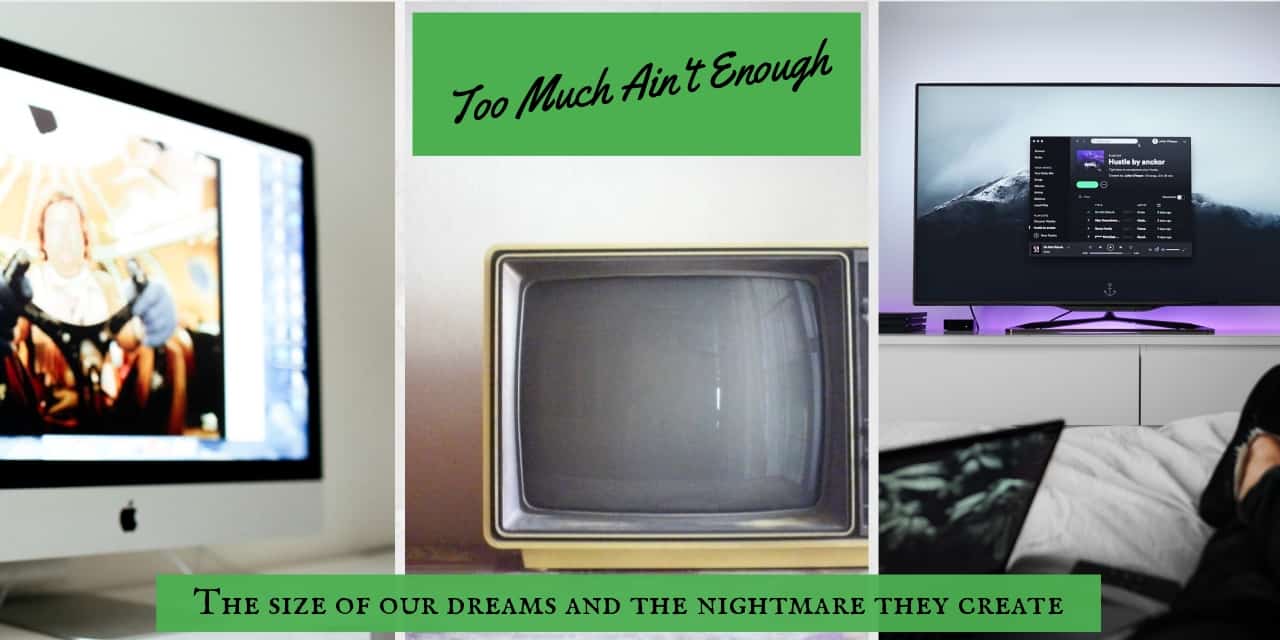 Too Much Ain't Enough

As we -- at the time of this writing -- are nearing yet another economic bust cycle, it's time to ponder about our collective tendency to keep falling for the same tricks and in the same traps. Isn't that amazing? Haven't we learned anything? Recall that around a decade ago, the curtains behind the big banks and other financial actors fell off their support and crashed onto the stage. This "accident" revealed that their massive wealth was but the result of speculative shenanigans.

While we more or less recovered from the crisis that ensued, we know for a fact that the same crew has been up to the same tricks. They've been openly following the same script for the entire decade that followed. Thus, it will come as no surprise once the same outcome -- or worse -- crashes on everyone, like a glass ceiling during an earthquake. We've earned it through our insatiable greed.

The truth is: we all want more and bigger things. We want them so big, and so bad, that we are willing to blatantly disregard the actual needs, the real cost, and the consequences. Too much ain't enough.

Nothing illustrates this tendency -- some would call it folly -- better than our need for bigger screens. According to consumer studies, as of July 2019, the most popular TV size on the market is now 65". That's huuuuuge by any 2016 standard. Yet three years later, it's the new normal. Don't get me wrong: nobody's complaining. But there's no stopping there either. Give it a few years and the market will demand 100"+ TVs. They will soon have to increase the height of the standard door frames just to allow the new devices in -- and the old ones out -- every few years.

I can perfectly see the details of what almost everyone on my block is watching on TV as I walk down the street. But as noted by David Shapton of UK-based RedShark, "for many people, the move to bigger screen size is going to result in worse pictures."  That picture quality problem is a consequence of the ratio between the source and the display resolutions; it is further compounded by the viewing distance. Indeed, you're living room isn't magically expanding on the horizontal axis as you grow your TV diagonally.

But none of that is going to stop people -- and you, and me -- from moving to "as big as can be" screens once the prices break the threshold of affordability.