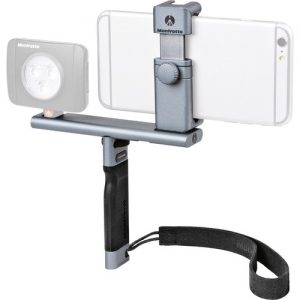 Connect additional accessories to your smartphone and boost its potential using the TwistGrip Complete Kit from Manfrotto. This manufacturer's bundle is made up of three items: The Manfrotto TwistGrip, HandGrip, and BaseGrip.

Manfrotto's TwistGrip is a universal smart clamp that serves as a base for a complete modular photographic system and a filming rig. Its 1/4" thread support and cold shoe lighting connection allow it to be used in multiple configurations and with different accessories. The HandGrip is a camera stabilizer for the TwistGrip, which not only increases its potential, but helps to further support your smartphone. The HandGrip connects to the TwistGrip using its 1/4" universal screw, and you can also connect it to a tripod using the universal tripod mount on its base. The HandGrip also features an ergonomic rubber grip and wrist strap, both of which help to keep your device secure as you concentrate on shooting video or stills.

If you'd like to turn your smartphone into a viable alternative to your DSLR, the Manfrotto BaseGrip is an accessory bar that lets you attach photo and video accessories to your smartphone. It attaches to the TwistGrip's base with its 1/4" universal screw, enabling accessories to be added onto it. Thanks to multiple universal smartphone camera attachments, you'll always have versatility and modularity for your shots. Also included is a carry bag.

The curated resources listed in this section (daily deals) are provided as-is. While the editorial team did  evaluate the content at or around the time of the publication, it cannot vouch for its accuracy, usefulness or relevance beyond what was available then. Links are dynamic by nature and the content may change at any time. Furthermore, note that unless indicated otherwise, Videocide has no association with, and does not endorse, promote or profit from the business or authors that publish the said material. Deals are provided and supported by the third party and may be canceled at any time. Use at your own risk.

Videocide.com is service provided by Codecide, a company located in Chicago, IL USA.