A film gauge used in filmmaking, and the film standard. In motion pictures that record on film, 35 mm is the most commonly used gauge.

35 mm film is a film gauge used in filmmaking, and the film standard. In motion pictures that record on film, 35 mm is the most commonly used gauge. The name of the gauge is not a direct measurement and refers to the nominal width of the 35 mm format photographic film, which consists of strips 1.377 ± 0.001 inches (34.976 ± 0.025 mm) wide. The standard image exposure length on 35 mm for movies ("single-frame" format) is four perforations per frame along both edges, which results in 16 frames per foot of film.

A variety of largely proprietary gauges were devised for the numerous camera and projection systems being developed independently in the late 19th century and early 20th century, as well as a variety of film feeding systems. This resulted in cameras, projectors, and other equipment having to be calibrated to each gauge. The 35 mm width, originally specified as ​1 3⁄8 inches, was introduced around 1890 by William Kennedy Dickson and Thomas Edison, using 120 film stock supplied by George Eastman. Film 35 mm wide with four perforations per frame became accepted as the international standard gauge in 1909 and remained by far the dominant film gauge for image origination and projection until the advent of digital photography and cinematography.

The gauge has been versatile in application. It has been modified to include sound, redesigned to create a safer film base, formulated to capture color, has accommodated a bevy of widescreen formats, and has incorporated digital sound data into nearly all of its non-frame areas. Eastman Kodak, Fujifilm and Agfa-Gevaert are some companies that offered 35 mm films. Today, Kodak is the last remaining manufacturer of motion picture film.

The ubiquity of 35 mm movie projectors in commercial movie theaters made 35 mm the only motion picture format that could be played in almost any cinema in the world until digital projection largely superseded it in the 21st century. 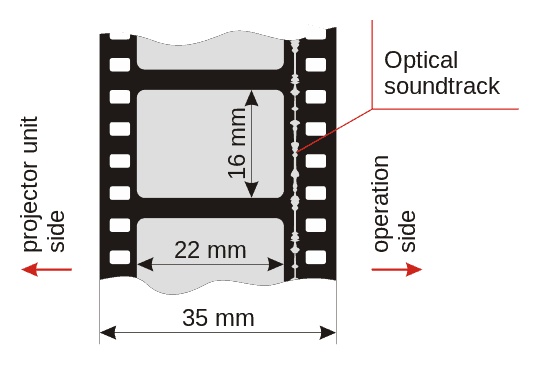 35mm
see also
source
Adapted from content published on wikipedia.org
credit
Last modified on April 10, 2021, 7:35 am
previous
next
Videocide.com is a service provided by Codecide, a company located in Chicago, IL USA.