8 mm refers to a film or video format in which the film or tape strip is eight (8) millimeters wide.

In its film version, the format exists in two main versions: the original standard 8 mm film, also known as regular 8 mm, and Super 8.

Although both standard 8 mm and Super 8 are 8 mm wide, Super 8 has a larger image area because of its smaller and more widely spaced perforations. There are also two other varieties of Super 8 — Single 8 mm and Straight-8 — that require different cameras, but produce a final film with the same dimensions.

The 8mm video format refers informally to three related videocassette formats for the NTSC and PAL/SECAM television systems. These are the original Video8 (analog recording) format and its improved successor Hi8 (analog video and analog audio but with provision for digital audio), as well as a more recent digital recording format known as Digital8.

Their user base consisted mainly of amateur camcorder users, although they also saw important use in the professional television production field.

In January 1984, Eastman Kodak announced the new technology. In 1985, Sony of Japan introduced the Handycam, one of the first Video8 cameras with commercial success. Much smaller than the competition's VHS and Betamax video cameras, Video8 became very popular in the consumer camcorder market.

The three formats are physically very similar, featuring both the same magnetic tape width and near-identical cassette shells, measuring 95 × 62.5 × 15 mm. This gives a measure of backward compatibility in some cases. One difference between them is in the quality of the tape itself, but the main differences lie in the encoding of the video when it is recorded onto the tape.

Video8 was the earliest of the three formats and is entirely analog. The 8mm tape width was chosen as smaller successor to the 12mm Betamax format, using similar technology (including U-shaped tape loading) but in a smaller configuration in response to the small configuration VHS-C compact camcorders introduced by the competition. It was followed by Hi8, a version with improved resolution. Although this was still analog, some professional Hi8 equipment could store additional digital stereo PCM sound on a special reserved track.

Digital8 is the most recent 8mm video format. It retains the same physical cassette shell as its predecessors, and can even record onto Video8 (not recommended) or Hi8 cassettes. However, the format in which video is encoded and stored on the tape itself is the entirely digital DV format (and thus very different from the analog Video8 and Hi8). Some Digital8 camcorders support Video8 and Hi8 with analog sound (for playback only), but this is not required by the Digital8 specification.

In all three cases, a length of 8mm-wide magnetic tape is wound between two spools and contained within a hard-shell cassette. These cassettes share similar size and appearance with the audio cassette, but their mechanical operation is far closer to that of VHS or Betamax videocassettes. Standard recording time is up to 180 minutes for PAL and 120 minutes for NTSC. (The cassette holds the same length tape; tape consumption is different between PAL and NTSC recorders.)

Like most other videocassette systems, Video8 uses a helical-scan head drum (it has a small 40mm head) to read from and write to the magnetic tape. The drum rotates at high speed (one or two rotations per picture frame—about 1800 or 3600 rpm for NTSC, and 1500 or 3000 rpm for PAL) while the tape is pulled along the drum's path. Because the tape and drum are oriented at a slight angular offset, the recording tracks are laid down as parallel diagonal stripes on the tape.

Unlike preceding systems, 8mm did not use a control track on the tape to facilitate the head following the diagonal tracks. Instead, 8mm recorded a sequence of four sine waves on each video track such that adjacent tracks would produce one of two heterodyne frequencies if the head mistracked. The system automatically adjusted the tracking such that the two frequencies produced were of equal magnitude. This system was derived from the dynamic track following (DTF) used by the Philips Video 2000 system. Sony rechristened the system as automatic track following (ATF) as the 8mm system lacked the ability of the heads to physically move within the head drum.

The main disadvantage of the ATF system was that unlike in the case of a control track, an 8mm camera or player cannot keep track of where the tape is during fast forward and rewind (though it could during shuttle search). This made editing using a linear editing system problematic. Some later cameras and players attempted to derive the tape position from the differential rotation of the spools with limited success.

Video8 was launched in 1985, into a market dominated by the VHS-C and Betamax formats. The first model was the Sony Handycam CCD-V8, a record only model with no play back features, only three focus settings and a 6x zoom. Soon after, an Auto-focus model was introduced.

In terms of video quality, Video8 and Beta-II offer similar performance in their standard-play modes. In terms of audio, Video8 generally outperforms its older rivals. Standard VHS and Beta audio are recorded along a narrow linear track at the edge of the tape, where it is vulnerable to damage. Coupled with the slow horizontal tape speed, the sound was comparable with that of a low-quality audio cassette. By contrast, all Video8 machines used audio frequency modulation (AFM) to record sound along the same helical tape path as that of the video signal. This meant that Video8's standard audio was of a far higher quality than that of its rivals, although linear audio did have the advantage that (unlike either AFM system) it could be re-recorded without disturbing the video. (Betamax and VHS Hi-Fi rarely appeared on camcorders, except on the high-end models.) Video8 later included true stereo, but the limitations of camcorder microphones at the time meant that there was little practical difference between the two AFM systems for camcorder usage. In general, Video8 comfortably outperforms non-HiFi VHS/Beta.

Video8 has one major advantage over the full-size competition. Thanks to their compact size, Video8 camcorders are small enough to hold in the palm of the user's hand. Such a feat was impossible with Betamax and full-sized VHS camcorders, which operate best on sturdy tripods or strong shoulders. Video8 also has an advantage in terms of time, because although VHS-C offers the same "palmcorder" size as Video8, the VHS-C tapes only hold, at most, 45 minutes of tape in SP speed. Thus, Video8's 120-minute capacity served well for most users during its peak. (Both machines include longer playing modes at 120 and 240 minutes, respectively, but at the cost of reduced-quality images.) Longer sessions generally require additional infrastructure (line power or more batteries), and hence longer recording times offer little advantage in a true travelling environment.

Video8/Hi8's main drawback is that tapes made with Video8 camcorders cannot be played directly on VHS hardware. Although it is possible to transfer tapes (using the VCR to rerecord the source video as it is played back by the camcorder), this inevitably leads to degradation of the analog signal. During the 1990s Sony did market a few VHS VCRs that also features an 8mm deck to allow convenient transfer to VHS. GoldStar also made a similar dual-deck machine.

Ultimately, Video8's main rival in the camcorder market turned out to be VHS-C, with neither dominating the market completely. However, both formats (along with their improved descendants, Hi8 and S-VHS-C) were nevertheless very successful. Collectively, they dominated the camcorder market for almost two decades before they were eventually crowded out by digital formats, such as MiniDV and 8cm DVD.

To counter the introduction of the Super-VHS format, Sony introduced Video Hi8 (short for high-band Video8). Like S-VHS, Hi8 uses improved recorder electronics and media formulation to increase the recorded bandwidth of the luminance signal. The FM carrier frequency range was increased from 4.2 to 5.4 MHz for regular Video8 (1.2 MHz bandwidth) to 5.7 to 7.7 MHz for Hi8 (2.0 MHz bandwidth). However, chroma signal bandwidth (color resolution) was not increased.

Both Hi8 and S-VHS were officially rated at a luminance resolution of 400 lines, a vast improvement from their respective base formats and are roughly equal to Laserdisc quality. Chroma resolution for both remains unchanged.

Both S-VHS and Hi8 retain the audio recording systems of their base formats; VHS HiFi Stereo outperforms Video8/Hi8 AFM but remains restricted to high-end machines. In the late 1980s, digital (PCM) audio was introduced into some higher-grade models of Hi8 recorders. Hi8 PCM audio operates at a sampling rate of 32 kHz with 8-bit samples—higher fidelity than the monaural linear dubbing offered by VHS/S-VHS, but vastly inferior to VHS HiFi. PCM-capable Hi8 recorders can simultaneously record PCM stereo in addition to the legacy (analog AFM) stereo audio tracks.

The final upgrade to the Video8 format came in 1998 when Sony introduced XR capability (extended resolution). Video8-XR and Hi8-XR offer a modest 10% improvement in luminance detail. XR equipment replays non-XR recordings well, and XR recordings are fully playable on non-XR equipment, though without the benefits of XR.

All Hi8 equipment can record and play in the legacy Video8 format. The reverse is not usually the case though there are a few late-entry Video8 systems that recognize and play Hi8 recordings.

The Sony EV-S900 (Hi8), Sony EV-S800, Sony EV-S700U, and Pioneer VE-D77 (Video8) all support a mode called "PCM Multi Audio Recording". While other 8mm decks support only a single stereo PCM recording, these units provide five additional stereo PCM tracks that are recorded in the video area of the signal. This allows 8mm tapes to hold 6 parallel tracks of audio, each up to 4 hours long (in LP mode). Only one stereo track can be recorded or listened to at a time, and tracks are selected with the "PCM Multi Audio" selector button.

Introduced in 1999, Digital8 is a form of the industry-standard DV codec, recorded on Hi8 media. In engineering terms, Digital8 and MiniDV are indistinguishable at the logical format level. To store the digitally encoded audio/video on a standard NTSC Video8 cassette, the tape must be run at double the Hi8 speed. Thus, a 120-minute NTSC Hi8 tape yields 60 minutes of Digital8 video. Most Digital8 units offer an LP mode, which increases the recording time on an NTSC P6-120 tape to 90 minutes.

Sony has licensed Digital8 technology to at least one other firm (Hitachi), which marketed a few models for a while; but as of October 2005, only Sony sells Digital8 consumer equipment. Digital8's main rival is the consumer MiniDV format, which uses narrower tape and a correspondingly smaller cassette shell. Since both technologies share the same logical audio/video format, Digital8 can theoretically equal MiniDV or even DVCAM in A/V performance. But as of 2005, Digital8 has been relegated to the entry-level camcorder market, where price, not performance, is the driving factor. Meanwhile, MiniDV is the de facto standard of the domestic digital tape camcorder market. 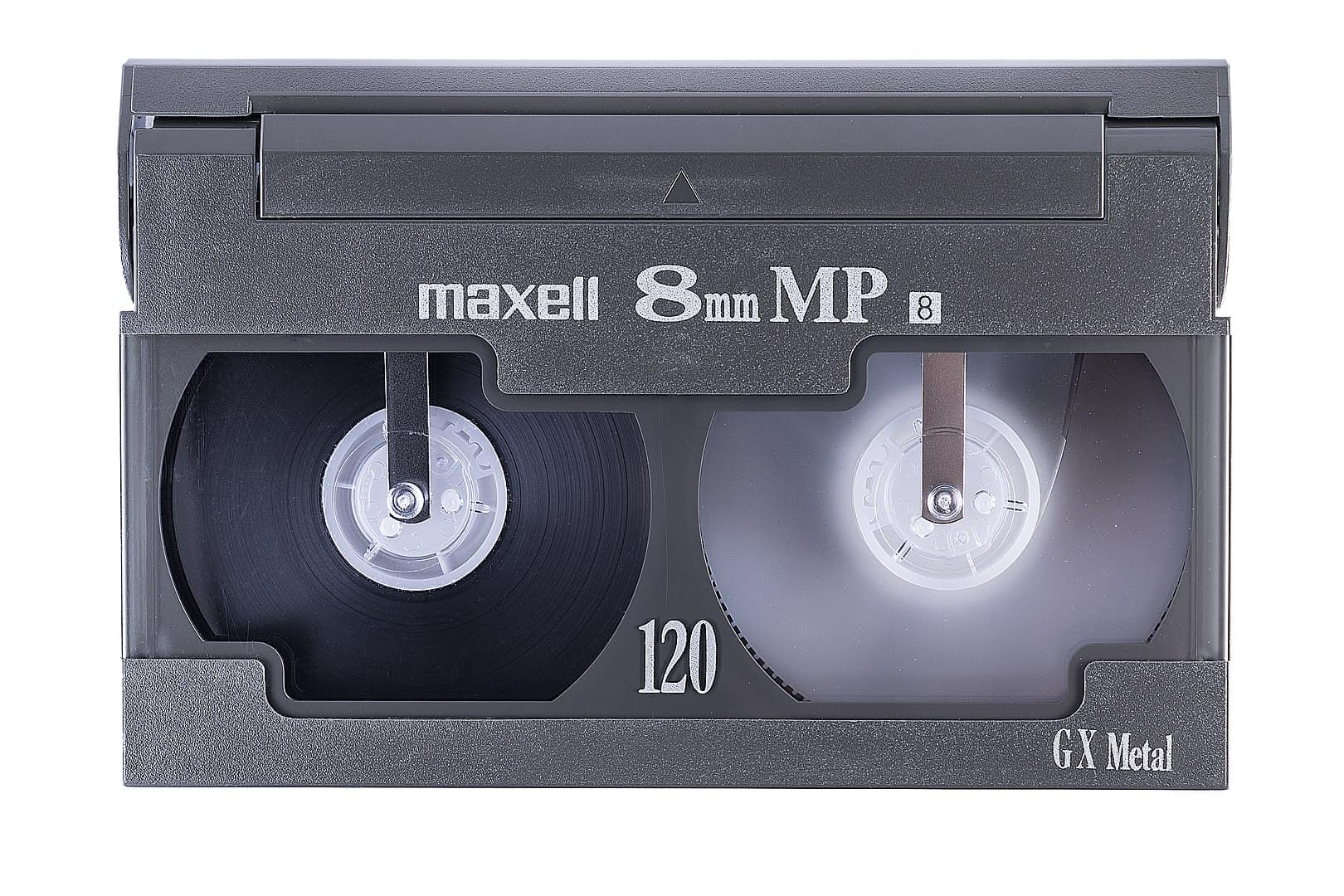 8 mm
acronymn
see also
source
Adapted from content published on wikipedia.org
credit
Last modified on July 27, 2020, 8:36 am
previous
next
Videocide.com is a service provided by Codecide, a company located in Chicago, IL USA.