A lens that brings two different wavelengths (typically red and blue) into focus.

The most common type of achromat is the achromatic doublet, which is composed of two individual lenses made from glasses with different amounts of dispersion. Typically, one element is a negative (concave) element made out of flint glass such as F2, which has relatively high dispersion, and the other is a positive (convex) element made of crown glass such as BK7, which has lower dispersion. The lens elements are mounted next to each other, often cemented together, and shaped so that the chromatic aberration of one is counterbalanced by that of the other.

Theoretical considerations of the feasibility of correcting chromatic aberration were debated in the 18th century following Newton's statement that such a correction was impossible (see History of the telescope). Credit for the invention of the first achromatic doublet is often given to an English barrister and amateur optician named Chester Moore Hall. Hall wished to keep his work on the achromatic lenses a secret and contracted the manufacture of the crown and flint lenses to two different opticians, Edward Scarlett and James Mann. They in turn sub-contracted the work to the same person, George Bass. He realized the two components were for the same client and, after fitting the two parts together, noted the achromatic properties. Hall used the achromatic lens to build the first achromatic telescope, but his invention did not become widely known at the time.

In the late 1750s, Bass mentioned Hall's lenses to John Dollond, who understood their potential and was able to reproduce their design. Dollond applied for and was granted a patent on the technology in 1758, which led to bitter fights with other opticians over the right to make and sell achromatic doublets.

Dollond's son Peter invented the apochromatic, an improvement on the achromat, in 1763. 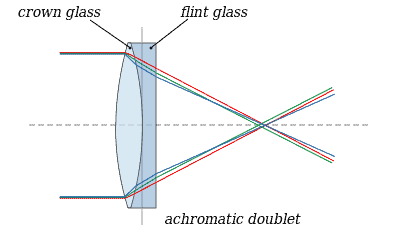