An imaginary line drawn across two subjects, setting a boundary for the camera angles. The action axis is used to anchor the continuity of action on screen.

In film making, the 180-degree rule is a basic guideline regarding the on-screen spatial relationship between a character and another character or object within a scene. By keeping the camera on one side of an imaginary axis between two characters, the first character is always frame right of the second character. Moving the camera over the axis is called jumping the line or crossing the line; breaking the 180-degree rule by shooting on all sides is known as shooting in the round.

The 180-degree rule enables the audience to visually connect with unseen movement happening around and behind the immediate subject and is particularly important in the narration of battle scenes.

The rule also applies to the movement of a character as the "line" created by the path of the character. For example, if a character is walking in a leftward direction and is to be picked up by another camera, the character must exit the first shot on frame left and enter the next shot frame right.

The imaginary line allows viewers to orient themselves with the position and direction of action in a scene. If a shot following an earlier shot in a sequence is located on the opposite side of the 180-degree line, then it is called a "reverse cut". Reverse cuts disorient the viewer by presenting an opposing viewpoint of the action in a scene and consequently altering the perspective of the action and the spatial orientation established in the original shot.

Another way to allow for crossing the line is to have several shots with the camera arching from one side of the line to the other during the scene. That shot can be used to orient the audience to the fact that they are looking at the scene from another angle. In the case of movement, if a character is seen walking into frame from behind on the left side walking towards a building corner on the right, as they walk around the corner of the building, the camera can catch them coming towards the camera on the other side of the building entering the frame from the left side and then walk straight at the camera and then exit the left side of the frame.

To minimize the "jolt" between shots in a sequence on either sides of the 180-degree line, a buffer shot can be included along the 180-degree line separating each side. This lets the viewer visually comprehend the change in viewpoint expressed in the sequence.

In professional productions, the applied 180-degree rule is an essential element for a style of film editing called continuity editing. The rule is not always obeyed. Sometimes a filmmaker purposely breaks the line of action to create disorientation. Carl Theodor Dreyer did this in The Passion of Joan of Arc; Stanley Kubrick also did this, for example, in the bathroom scene in The Shining. The Wachowskis and directors Jacques Demy, Tinto Brass, Yasujirō Ozu, Wong Kar-wai, and Jacques Tati sometimes ignored this rule also, as has Lars von Trier in Antichrist. In the seminal film of the French New Wave, À bout de souffle ("Breathless"), Jean-Luc Godard breaks the rule in the first five minutes in a car scene that jumps between the front and back seats, improvising an "aesthetic rebellion" for which the New Wave would become known. When the rule is broken accidentally, or for a technical reason (such as the inability to place a camera physically in the correct position), there are ways for the editor to attempt to hide the mistake. The editor may pre-lap one or two words of dialog before the cut, so that the viewer is concentrating on what is being said and may be less likely to notice the rule-breaking cut.

In the Japanese animated picture Paprika, two of the main characters discuss crossing the line and demonstrate the disorienting effect of actually performing the action. 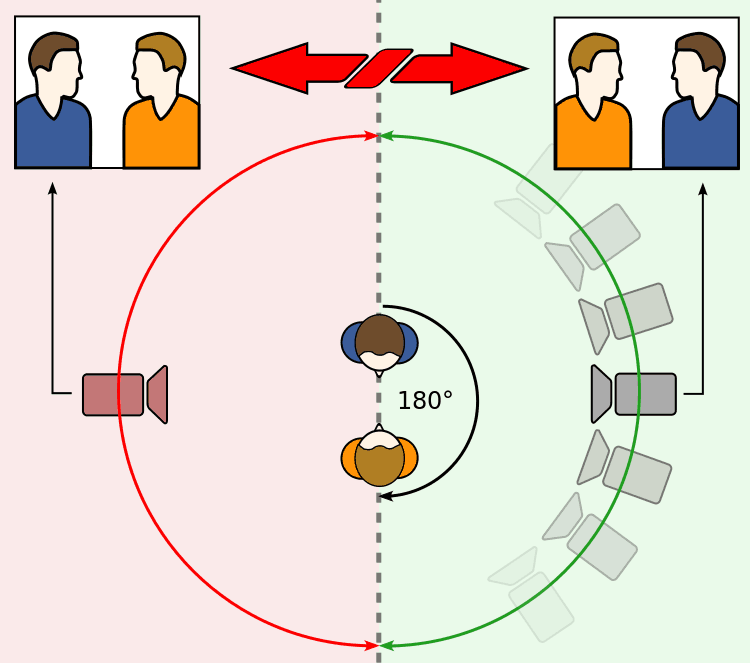 Action axis
also known as
see also
resources
source
Adapted from content published on wikipedia.org
Last modified on July 9, 2019, 8:48 am
previous
next
Videocide.com is a service provided by Codecide, a company located in Chicago, IL USA.