A color space developed by Adobe Systems, Inc. in 1998 designed to encompass most of the colors achievable on CMYK color printers, but by using RGB primary colors on a device such as a computer display.

Beginning in 1997, Adobe Systems was looking into creating ICC profiles that its consumers could use in conjunction with Photoshop's new color management features. Since not many applications at the time had any ICC color management, most operating systems did not ship with useful profiles.

Lead developer of Photoshop, Thomas Knoll decided to build an ICC profile around specifications he found in the documentation for the SMPTE 240M standard, the precursor to Rec. 709. SMPTE 240M's gamut was wider than that of the sRGB color space, but not by much. However, with the release of Photoshop 5.0 nearing, Adobe made the decision to include the profile within the software.

Although users loved the wider range of reproducible colors, those familiar with the SMPTE 240M specifications contacted Adobe, informing the company that it had copied the values that described idealized primaries, not actual standard ones. The real values were much closer to sRGB's, which avid Photoshop consumers did not enjoy as a working environment. To make matters worse, an engineer had made an error when copying the red primary chromaticity coordinates, resulting in an even more inaccurate representation of the SMPTE standard.

Adobe tried numerous tactics to correct the profile, such as correcting the red primary and changing the white point to match that of the CIE Standard Illuminant D50, yet all of the adjustments made CMYK conversion worse than before. In the end, Adobe decided to keep the "incorrect" profile but changed the name to Adobe RGB (1998) in order to avoid a trademark search or infringement.

In Adobe RGB (1998), colors are specified as [R,G,B] triplets, where each of the R, G, and B components have values ranging between 0 and 1. When displayed on a monitor, the exact chromaticities of the reference white point [1,1,1], the reference black point [0,0,0], and the primaries ([1,0,0], [0,1,0], and [0,0,1]) are specified. To meet the color appearance requirements of the color space, the luminance of the monitor must be 160.00 cd/m2 at the white point, and 0.5557 cd/m2 at the black point, which implies a contrast ratio of 287.9. Moreover, the black point shall have the same chromaticity as the white point, yet with luminance equal to 0.34731% of the white point luminance. The ambient illumination level at the monitor faceplate when the monitor is turned off must be 32 lx. 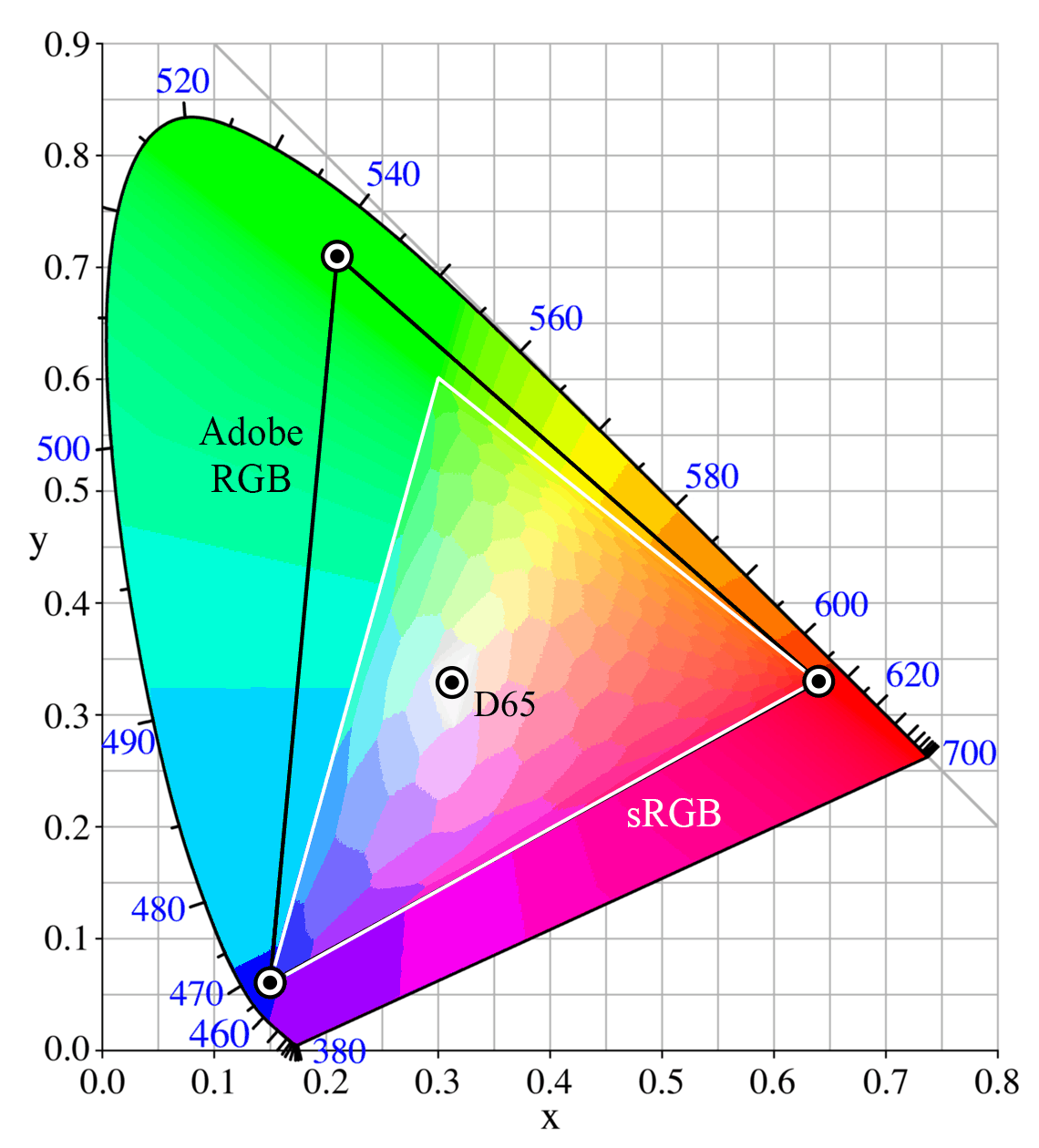