A video display that only accepts input from a composite video signal.

An analog monitor is a video display that only receives input in the form of a composite video signal. A composite video signal encodes all information on a single conductor; a composite cable has a single live conductor plus earth. Other equipment with display functionality includes monitors with more advanced interfaces and connectors giving a better picture, including analog VGA, and digital DVI, HDMI, and DisplayPort; and television (TV) receivers which are self-contained, receiving and displaying video RF broadcasts received with an internal tuner. Video monitors are used for displaying computer output, closed-circuit television (e.g. security cameras), and other applications requiring a two-dimensional monochrome or color image.

In principle a monitor can have one or several of multiple types of input, including composite—in addition to composite monitors as such, many monitors accept composite input among other standards. In practice, computer monitors ceased to support composite input as other interfaces became predominant.

A composite monitor must have a two-dimensional approximately flat display device with circuitry to accept a composite signal with picture and synchronization information, process it into monochrome chrominance and luminance, or the red, green, and blue of RGB, plus synchronization pulses, and display it on a screen, which was predominantly a CRT until the 21st century, and then a thin panel using LCD or other technology.

A critical factor in the quality of this display is the type of encoding used in the TV camera to combine the signal together and the decoding used in the monitor to separate the signals back to RGB for display. Composite monitors can be very high quality, with professional broadcast reference displays costing US$10k-$15k as of 2000. Comb filters are frequently used to improve the quality of a composite monitor, and devices using Faroudja decoders are frequently considered the pinnacle of composite displays.

Early innovations of this technology

Originally, these monitors were used for commercial studios. Composite video first saw home use for dubbing tapes on VCRs. Early computers, both commercial and amateur, mostly used teleprinters for output; simple home models might simply display an array of lights to be interpreted as binary information. Later the concept of the TV Typewriter was born, effectively the video monitor used for digital information; this was implemented as dedicated monitors and as interfaces to the television receivers present in many homes. Many computers incorporated a display. From the late 1970s, stand-alone composite monitors came into use, including by the Apple II, Commodore VIC 20/64/128, Atari, the IBM PC with CGA card, some computers compatible with it, and other home and business computers of the 1980s. These computers had composite video outputs, and sometimes composite monitors bundled with the systems. Some computer companies separately sold their own composite monitors for use with their computers.

During the same time period, home game consoles chose to stick with RF modulation since many people had color televisions without composite video inputs. However, in 1985, the NES was released and was the first game console to feature direct composite outputs. Although the redesigned NES (NES 2) lacked these outputs, the Super NES and nearly all consoles made since have included the direct composite outputs. From the fifth-generation systems (such as the Sony PlayStation and the Nintendo 64) onward, many consoles used these outputs as the primary means of connecting to the television, requiring a separate adapter for use on televisions lacking composite inputs. As of today, some people still use stand-alone composite monitors with modern game consoles even with the advent of televisions with a tuner and composite inputs combined.

Composite input to a non-composite device

When a composite monitor is not available, a device requiring one can use an RF modulator to encode a composite output onto an RF signal which can be received by analog television, available in many homes until the digital switchover.

Devices are available to convert from composite to other standards such as analog VGA or digital HDMI; such devices may be called upscalers or scan converters, although not all devices with these names will handle composite input. Price and quality vary. A converter with electronics is necessary; a simple cable will not do the job.

Commercial use of composite monitors

Some monitors used in video surveillance give a monochrome picture. 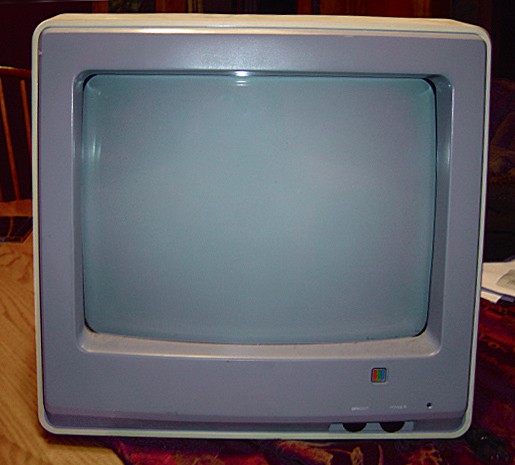