A mechanical re-design by Apple of the standard Attachment Unit Interface (AUI) used to connect Ethernet transceivers to computer equipment.

AAUI was part of a system of Ethernet peripherals that tried to make connecting to Ethernet much easier. At the time, Ethernet systems usually were 10BASE2, also known as thinnet. Apple's system was called FriendlyNet. A FriendlyNet 10BASE2 system did not use BNC T-connectors or separate 50 Ω terminators. Instead of a single BNC connector that was inserted into a T-connector placed inline in the cable, the AAUI transceiver had two BNC connectors, one on each side to which the cables were attached. The transceiver would automatically terminate the network if a cable was not attached to one of the sides. Additionally, Apple 10BASE2 cables would terminate the network if no device was attached to them. Thus the number of mistakes that could be made hooking up a thinnet network was reduced considerably. Since any of these mistakes would disable the network in an area this was a significant improvement.

FriendlyNet equipment was quite expensive and even third-party AAUI transceivers were rather expensive. Because of this, Apple's computers, which were billed as having built-in Ethernet, were actually rather expensive to connect to Ethernet, perhaps adding as much as 10% to the total price of the computer system. Additionally, AAUI held no advantage for any system other than 10BASE2, and thus as 10BASE-T became ubiquitous it became impossible to justify the cost of an external transceiver at all. Apple eventually abandoned the system and sold off the name.

Macintosh Quadra, Centris, PowerBook 500, Duo Dock II (for PowerBook Duo) and early Power Macintoshes had an AAUI port, which requires an external transceiver. By the time AAUI was nearing the end of its life, an AAUI transceiver could cost as much or more than the cost of a low-cost Ethernet card on the PC—a disproportionate amount—as network cards for PCs did not become commodity items until the spread of broadband internet in the early 21st century. Later models included both an AAUI and modular connector port for directly connecting 10BASE-T; either could be used, but not both at the same time. AAUI connectors were also present on some Processor Direct Slot Ethernet adapter cards used in Macintosh LC and Performa machines. AAUI had disappeared by the late 1990s, when new Apple machines, starting with the beige Power Macintosh G3 series, included only RJ-45 jacks instead of both.

Many third parties also created AAUI transceivers. Most made simplifications to the connectors and cables, presumably to reduce costs. Most third parties, as well as any non-Apple equipment, would use standard 10BASE2 cabling, including T-connectors and manual termination. Additionally, Apple's 10BASE2 cables were not really feasible for all uses since they only came in fixed lengths and the ends were not detachable, making it very difficult to wire them through walls. Unfortunately, when mixing and matching Apple and non-Apple 10BASE2 devices, there were many seemingly natural configurations of cables and connectors which would cause the network to become unreliable or unusable in the area, reducing the value of the complex and proprietary Apple 10BASE2 wiring system.

AUI used a full-sized 15-pin D connector (model DA-15) that used a sliding clip for mechanical connections in place of thumbscrews. AAUI replaced these with a small 14-position, 0.05-inch-spaced ribbon contact connector. The connector may have been changed to avoid confusion with the monitor port on early Macintoshes, which also used a 15-pin D connector. The connector was locked into position using two clips or hooks on the sides of the connector outside of the D shell (where screws often are on D subs) which automatically clicked on when plugged in, and could be removed simply by pulling back on a sliding sheath over the body of the connector, disengaging the hooks. Third-party AAUI devices often omitted this sheath, requiring the user to directly squeeze small tabs on the sides of the plug housing to detach the hooks.

AAUI signals have the same description, function, and electrical requirements as the Attachment Unit Interface (AUI) signals of the same name, as detailed in IEEE 802.3-1990 CSMA/CD Standard, section 7, with the exception that most hosts provide only 5 volts of power rather than the 12 volts required for most AUI transceivers. An adapter containing a power supply to provide the required 12 volts was available from Apple to permit connection of standard AUI transceivers to an AAUI port—this facilitated direct connection to 10BASE-F (fibre optic) and 10BASE5 (ThickNet) Ethernet networks, for which AAUI transceivers were not available. 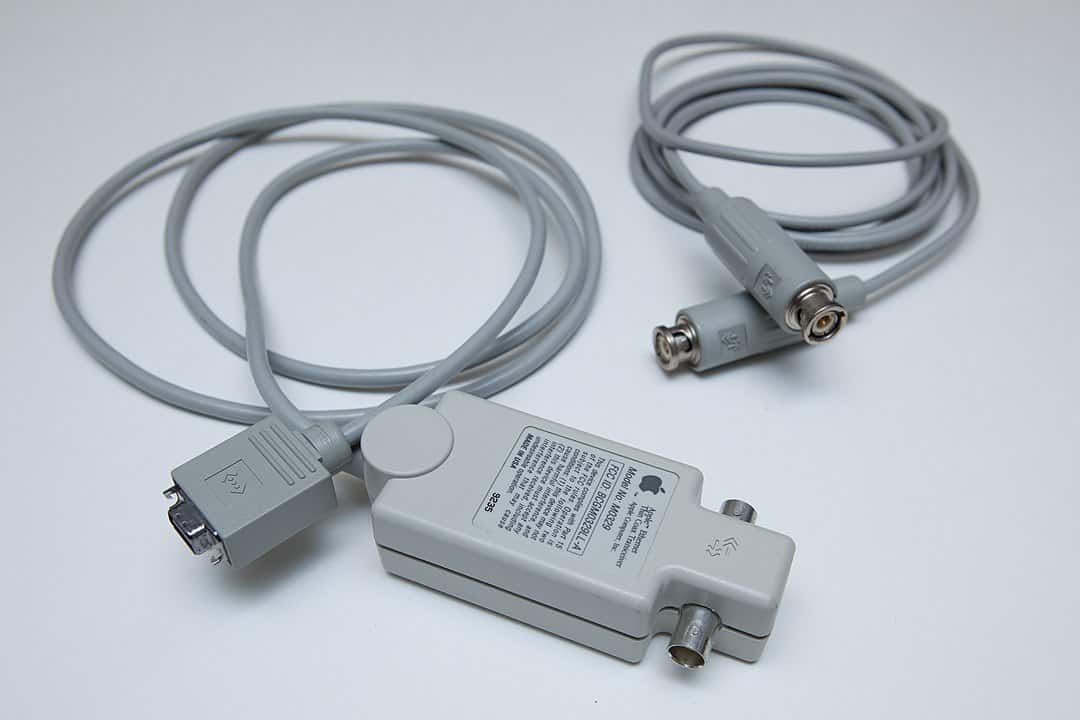