A lamp that produces light by an electric arc.

An arc lamp or arc light is a lamp that produces light by an electric arc (also called a voltaic arc). The carbon arc light, which consists of an arc between carbon electrodes in air, invented by Humphry Davy in the first decade of the 1800s, was the first practical electric light. It was widely used starting in the 1870s for street and large building lighting until it was superseded by the incandescent light in the early 20th century. It continued in use in more specialized applications where a high-intensity point light source was needed, such as searchlights and movie projectors until after World War II. The carbon arc lamp is now obsolete for most of these purposes, but it is still used as a source of high-intensity ultraviolet light.

The term is now used for gas discharge lamps, which produce light by an arc between metal electrodes through an inert gas in a glass bulb. The common fluorescent lamp is a low-pressure mercury arc lamp. The xenon arc lamp, which produces a high-intensity white light, is now used in many of the applications which formerly used the carbon arc, such as movie projectors and searchlights.

An arc is a discharge that occurs when a gas is ionized. A high voltage is pulsed across the lamp to "ignite" or "strike" the arc, after which the discharge can be maintained at a lower voltage. The "strike" requires an electrical circuit with an igniter and a ballast. The ballast is wired in series with the lamp and performs two functions.

First, when the power is first switched on, the igniter/starter (which is wired in parallel across the lamp) sets up a small current through the ballast and starter. This creates a small magnetic field within the ballast windings. A moment later the starter interrupts the current flow from the ballast, which has a high inductance and therefore tries to maintain the current flow (the ballast opposes any change in current through it); it cannot, as there is no longer a 'circuit'. As a result, a high voltage appears across the ballast momentarily, to which the lamp is connected; therefore the lamp receives this high voltage across it which 'strikes' the arc within the tube/lamp. The circuit will repeat this action until the lamp is ionized enough to sustain the arc.

When the lamp sustains the arc, the ballast performs its second function, to limit the current to that needed to operate the lamp. The lamp, ballast, and igniter are rating-matched to each other; these parts must be replaced with the same rating as the failed component or the lamp will not work.

The color of the light emitted by the lamp changes as its electrical characteristics changes with temperature and time. Lightning is a similar principle where the atmosphere is ionized by the high potential difference (voltage) between earth and storm clouds.

The temperature of the arc in an arc lamp can reach several thousand degrees Celsius. The outer glass envelope can reach 500 degrees Celsius, therefore before servicing one must ensure the bulb has cooled sufficiently to handle. Often, if these types of lamps are turned off or lose their power supply, one cannot restrike the lamp again for several minutes (called cold restrike lamps). However, some lamps (mainly fluorescent tubes/energy-saving lamps) can be restruck as soon as they are turned off (called hot restrike lamps).

The Vortek water-wall plasma arc lamp, invented in 1975 by David Camm and Roy Nodwell at the University of British Columbia, Vancouver, Canada, made the Guinness Book of World Records in 1986 and 1993 as the most powerful continuously burning light source at over 300 kW or 1.2 million candle power.

In popular use, the term arc lamp means carbon arc lamp only. In a carbon arc lamp, the electrodes are carbon rods in free air. To ignite the lamp, the rods are touched together, thus allowing a relatively low voltage to strike the arc. The rods are then slowly drawn apart, and electric current heats and maintains an arc across the gap. The tips of the carbon rods are heated and the carbon vaporizes. The carbon vapor in the arc is highly luminous, which is what produces the bright light. The rods are slowly burnt away in use, and the distance between them needs to be regularly adjusted in order to maintain the arc.

Many ingenious mechanisms were invented to affect the distance automatically, mostly based on solenoids. In one of the simplest mechanically-regulated forms (which was soon superseded by more smoothly acting devices) the electrodes are mounted vertically. The current supplying the arc is passed in series through a solenoid attached to the top electrode. If the points of the electrodes are touching (as in start-up) the resistance falls, the current increases and the increased pull from the solenoid draw the points apart. If the arc starts to fail the current drops and the points close up again.

The Yablochkov candle is a simple arc lamp without a regulator, but it has the drawbacks that the arc cannot be restarted (single use) and a limited lifetime of only a few hours. 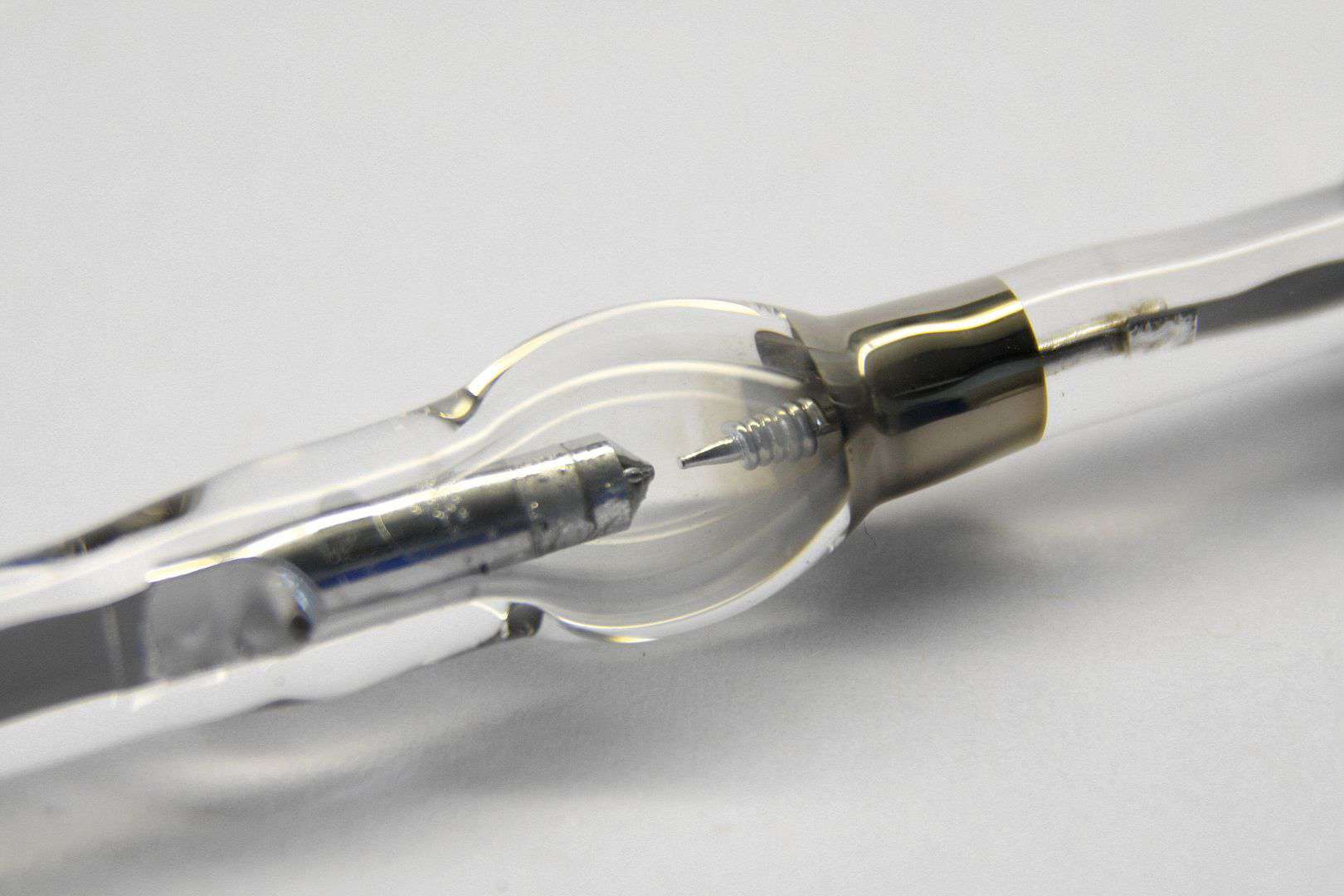