Sound that is indigenous to the action but not precisely synchronized with the imagery on screen.

Asynchronous sound is sound that is indigenous to the action but has not been synchronized with the screen image. Asynchronous sound also includes the aesthetic use of sound for expressive purposes. Because of the composite nature of film art, the element of sound (music, dialogue, sound effects) is highly manipulative. The sounds of a clucking chicken can be juxtaposed with a shot of a ranting politician for satirical effect.

A popular variation of asynchronous sound in contemporary filmmaking has been in the use of sound advances in editing scenes. An asynchronous sound advance can occur when the editor shows the face of a character screaming in horror, and instead of using the natural sound of the character's horrified voice, inserts the piercing, shrill siren of a police car, to be seen in the following scene. The device of the sound advance combines asynchronous and synchronous sound in a uniquely cinematic way. Francis Ford Coppola made extensive use of combined synchronous-asynchronous sound in the baptism scene of The Godfather (1972). Near the end of the film, shots of a solemn religious ceremony are juxtaposed with scenes of a vendetta occurring simultaneously in various parts of the city. The sounds of the grand church music and priestly intonations of the baptismal rite continue uninterrupted as the gunmen carry out their tasks. Through the use of synchronous-asynchronous sound, and visual crosscutting, an ironic, psychological linking of past, present, and future occurs. Asynchronous sound can serve to create irony between sound and image, to satirize and parody dramatic situations, and to link separate moments of time in expressive ways. 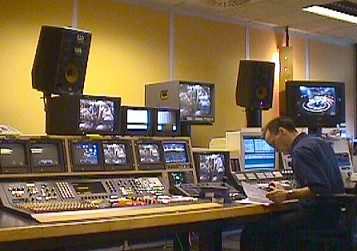