Sound engineer
A professional who helps to produce the audio portion of a recording or a live performance.

An audio engineer is a professional who helps to produce the audio portion of a recording or a live performance. Their job is to balance and adjust sound sources using equalization, dynamics processing, and audio effects. They mix, reproduce, and reinforce the sound. Audio engineers work on the "technical aspect of recording—the placing of microphones, pre-amp knobs, the setting of levels. The physical recording of any project is done by an engineer ... the nuts and bolts."

Sound engineering is increasingly seen as a creative profession where musical instruments and technology are used to produce sound for film, radio, television, music, and video games. Audio engineers also set up, soundcheck, and do live sound mixing using a mixing console and a sound reinforcement system for music concerts, theatre, sports games, and corporate events.

Alternatively, an audio engineer can refer to a scientist or professional engineer who holds an engineering degree and who designs, develops, and builds audio or musical technology working under terms such as acoustical engineering, electronic/electrical engineering, or (musical) signal processing.

A variety of terms are used to describe audio engineers who install or operate sound recording, sound reinforcement, or sound broadcasting equipment, including large and small format consoles. Terms such as "audio technician," "sound technician," "audio engineer," "audio technologist," "recording engineer," "sound mixer," "mixing engineer" and "sound engineer" can be ambiguous; depending on the context they may be synonymous, or they may refer to different roles in audio production. Such terms can refer to a person working in sound and music production; for instance, a "sound engineer" or "recording engineer" is commonly listed in the credits of commercial music recordings (as well as in other productions that include sound, such as movies). These titles can also refer to technicians who maintain professional audio equipment. Certain jurisdictions specifically prohibit the use of the title engineer to any individual not a registered member of a professional engineering licensing body.

In the recording studio environment, a sound engineer records, edits, manipulates, mixes, or masters sound by technical means to realize the creative vision of the artist and record producer. While usually associated with music production, an audio engineer deals with sound for a wide range of applications, including post-production for video and film, live sound reinforcement, advertising, multimedia, and broadcasting. In larger productions, an audio engineer is responsible for the technical aspects of a sound recording or other audio production, and works together with a record producer or director, although the engineer's role may also be integrated with that of the producer. In smaller productions and studios the sound engineer and producer are often the same person.

In German, the "Tontechniker" (audio technician) is the one who operates the audio equipment and the "Tonmeister" (sound master) is a person who creates recordings or broadcasts of music, who is both deeply musically trained (in classical and non-classical genres), and who also has a detailed theoretical and practical knowledge of virtually all aspects of sound. 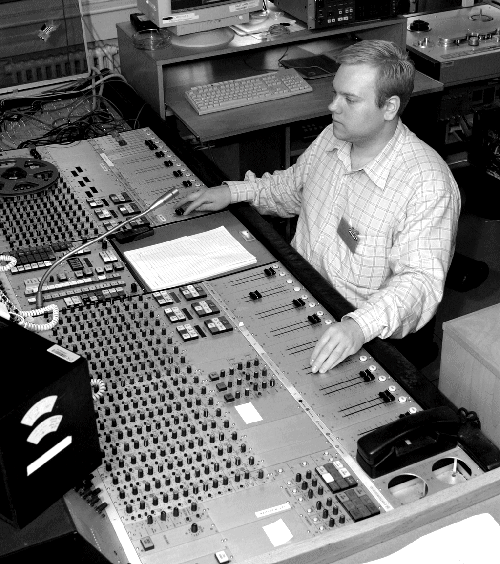