A feature of some more advanced devices where the camera will take several successive shots (often three) with slightly different settings.

Auto bracketing is a feature of some more advanced cameras, whether film or digital cameras, particularly single-lens reflex cameras, where the camera will take several successive shots (often three) with slightly different settings. The images may be automatically combined, for example into one high dynamic range image, or they may be stored separately so the best-looking pictures can be picked later from the batch. When the photographer achieves the same result by changing the camera settings between each shot, this is simply called bracketing.

The bracketing is typically for one specific parameter, as listed below:

Exposure auto bracketing (often abbreviated to AEB for automatic exposure bracketing or BR for Bracketing) is the most common form. In this, the camera is set to capture the same image several times with different exposure settings, both over-exposed and under-exposed (lighter and darker) compared to the current setting on the camera, which may already include exposure compensation.

Depending on the camera, the difference between each of the auto bracketed shots could be anywhere from one-quarter up to three full stops in each direction, in full, half, third, or quarter stop increments, ranging from two up to nine shots in series. Sometimes it is possible to either define the order, in which the shots will be taken or to give an offset as a start-point of the bracketing series. More sophisticated equipment allows auto-exposure bracketing to be combined with timer and intervalometer functions as well.

Cameras can perform autobracketing by adjusting either the shutter speed (typically in aperture priority mode, sometimes also in manual or program mode) or the aperture setting (typically in shutter priority mode). In programmed exposure mode, many cameras will alter both parameters at the same time. Some cameras allow swapping the parameter used for shifting in manual mode. Digital cameras may also alter the ISO setting if auto-ISO is enabled.

Exposure autobracketing is most commonly used with color reversal film (slide film) because of its small exposure latitude compared with print film (which has a wide exposure latitude) and digital cameras (which enable the photographer to review the captured image). In digital photography, auto bracketing is convenient to shoot pictures for high dynamic range imaging.

If in manual mode, a camera defaults to alter the shutter speed, it might be necessary to swap the parameters used for shifting in order for the camera to alter the aperture instead.

Since the flash may need time to recharge between the shots, some cameras fall back to single-advance drive mode during auto flash bracketing, even if they are otherwise configured for a continuous-advance drive.

Automatic ISO bracketing simulates exposure bracketing by altering the ISO or signal gain prior to the conversion of the image to JPEG or other image file formats. The actual exposure values (aperture and shutter speed) are usually kept constant. Auto ISO bracketing is not a common feature of digital cameras.

This function provides a way of dealing with mixed lighting by having the camera take one shot and process the raw sensor data several times for slightly different white point settings, with both higher and lower color temperatures (bluer and redder) compared to the current setting on the camera. Typically, the amount of offset can be configured.

Since shooting in a camera's raw format (if supported) the white balance can be arbitrarily changed in postprocessing as well at a later stage, white balance bracketing is particularly useful for reviewing different white balance settings in the field.

A series of images demonstrating a focus bracket. The image on the left shows a single shot taken at f/10 with the features of the fly closest to the camera. The center image shows the features farthest from the camera. The image on the right shows focuses stacking: a sequence of six incrementally focused images of the fly assembled to make a composite image using CombineZM.

Some cameras provide bracketing of two parameters at the same time. 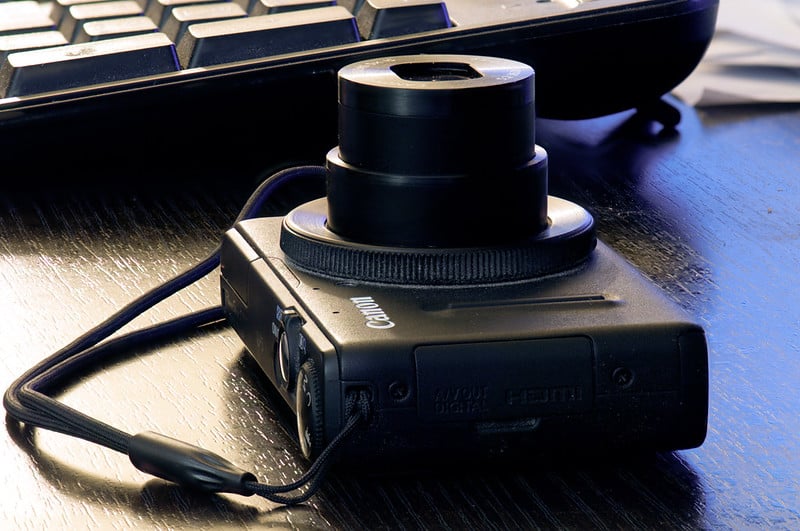