A component required by fluorescent and HID lighting fixtures.

An electrical ballast is a device placed in series with a load to limit the amount of current in an electrical circuit.

A familiar and widely used example is the inductive ballast used in fluorescent lamps to limit the current through the tube, which would otherwise rise to a destructive level due to the negative differential resistance of the tube's voltage-current characteristic.

Ballasts vary greatly in complexity. They may be as simple as a resistor, inductor, or capacitor (or a combination of these) wired in series with the lamp; or as complex as the electronic ballasts used in compact fluorescent lamps and high-intensity discharge lamps.

This technique uses a combination filament–cathode at each end of the lamp in conjunction with a mechanical or automatic (bi-metallic or electronic) switch that initially connects the filaments in series with the ballast to preheat them. When filaments are disconnected, an inductive pulse from the ballast starts the lamp. This system is described as "Preheat" in North America and "Switch Start" in the UK, and has no specific name in the rest part of the world. This system is common in 200–240 V countries (and for 100–120 V lamps up to about 30 watts).

Although an inductive pulse makes it more likely that the lamp will start when the starter switch opens, it is not actually necessary. The ballast in such systems can equally be a resistor. A number of fluorescent lamp fittings used a filament lamp as the ballast in the late 1950s through to the 1960s. Special lamps were manufactured that were rated at 170 volts and 120 watts. The lamp had a thermal starter built into the 4 pin base. The power requirements were much larger than using an inductive ballast (though the consumed current was the same), but the warmer light from the lamp type of ballast was often preferred by users particularly in a domestic environment.

Resistive ballasts were the only type that was usable when the only supply available to power the fluorescent lamp was DC. Such fittings used the thermal type of starter (mostly because they had gone out use long before the glow starter was invented), but it was possible to include a choke in the circuit whose sole purpose was to provide a pulse on the opening of the starter switch to improve starting. DC fittings were complicated by the need to reverse the polarity of the supply to the tube each time it started. Failure to do so vastly shortened the life of the tube.

An instant start ballast does not preheat the electrodes, instead of using a relatively high voltage (~600 V) to initiate the discharge arc. It is the most energy-efficient type, but yields the fewest lamp-start cycles, as the material is blasted from the surface of the cold electrodes each time the lamp is turned on. Instant-start ballasts are best suited to applications with long duty cycles, where the lamps are not frequently turned on and off. Although these were mostly used in countries with 100-120 volt mains supplies (for lamps of 40 W or above), they were briefly popular in other countries because the lamp started without the flicker of switch start systems. The popularity was short-lived because of the short lamp life.

A rapid start ballast applies a voltage and heats the cathodes simultaneously. It provides superior lamp life and more cycle life but uses slightly more energy as the electrodes in each end of the lamp continue to consume heating power as the lamp operates. Again, although popular in 100-120 volt countries for lamps of 40 W and above, a rapid start is sometimes used in other countries particularly where the flicker of switch start systems is undesirable. This ballast is incompatible with the European energy saver T8 fluorescent lamps, that retrofits the older T12 lamps since these lamps have much higher starting voltage than the open-circuit voltage of rapid start ballasts.

A dimmable ballast is very similar to a rapid start ballast, but usually has a capacitor incorporated to give a power factor nearer to unity than a standard rapid start ballast. A quadrac type light dimmer can be used with a dimming ballast, which maintains the heating current while allowing lamp current to be controlled. A resistor of about 10 kΩ is required to be connected in parallel with the fluorescent tube to allow the reliable firing of the quadrac at low light levels.

Used in high-end electronic fluorescent ballasts. This ballast applies power to the filaments first, it allows the cathodes to preheat and then applies voltage to the lamps to strike an arc. Lamp life typically operates up to 100,000 on/off cycles when using programmed start ballasts. Once started, filament voltage is reduced to increase operating efficiency.

This ballast gives the best life and most starts from lamps, and so is preferred for applications with very frequent power cycling such as vision examination rooms and restrooms with a motion detector switch.

Standard ballasts that are equipped with an integrated battery, designed to provide emergency egress lighting in the event of a power failure (typically less than 2 hours). These can be used as an alternative to egress lighting powered by a back-up electrical generator. However, emergency ballasts require regular testing and have a useful life of 10-12 years.

A hybrid ballast has a magnetic core-and-coil transformer and an electronic switch for the electrode-heating circuit. Like a magnetic ballast, a hybrid unit operates at line power frequency—50 Hz in Europe, for example. These types of ballasts, which are also referred to as cathode-disconnect ballasts, disconnect the electrode-heating circuit after they start the lamps. 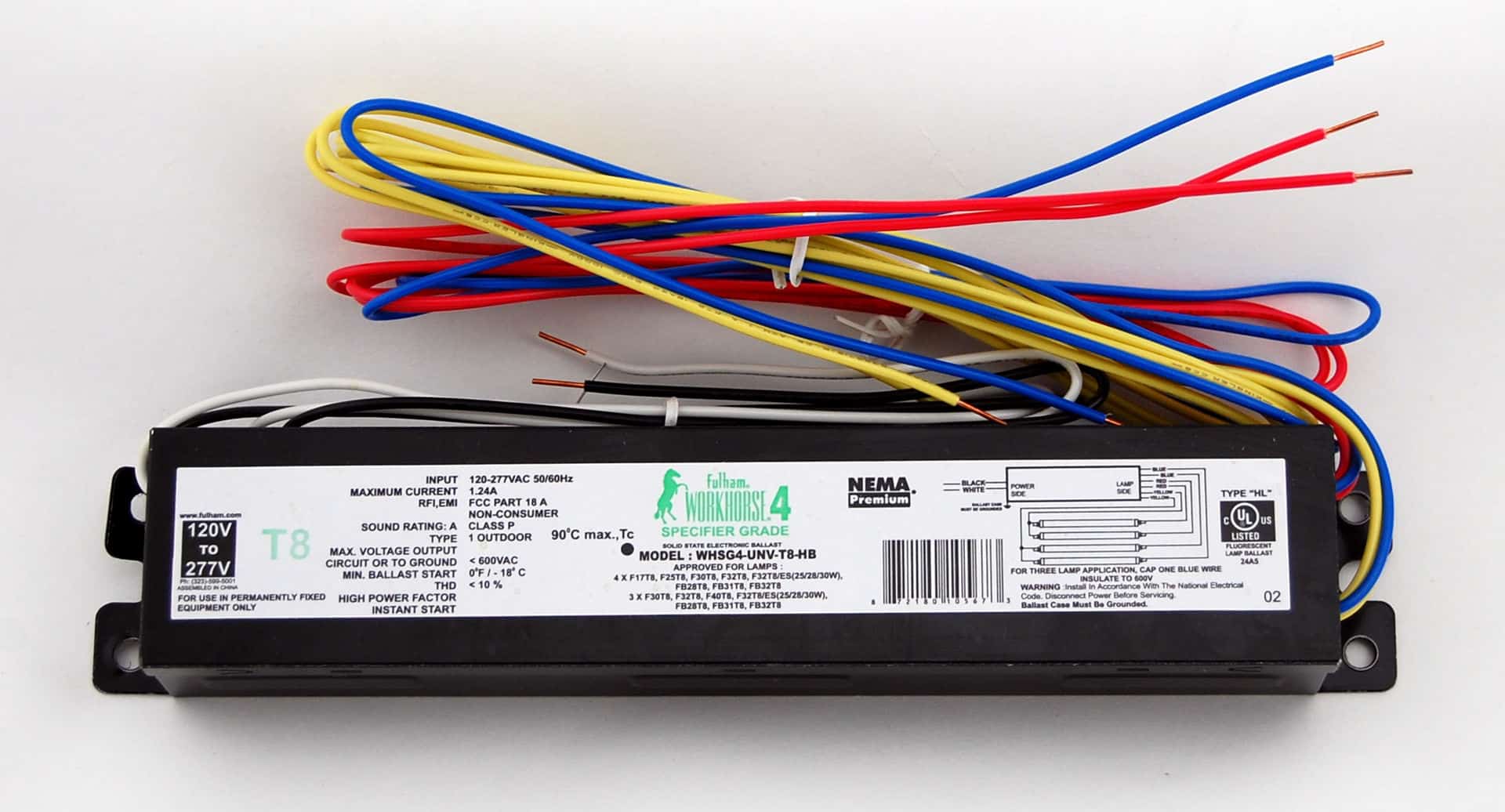 Ballast
see also
source
Adapted from content published on wikipedia.org
credit
Last modified on December 1, 2019, 8:27 am
previous
next
Videocide.com is a service provided by Codecide, a company located in Chicago, IL USA.