A single-wire (one conductor) electrical connector used for joining wires to equipment.

A banana connector (commonly banana plug for the male, banana socket or banana jack for the female) is a single-wire (one conductor) electrical connector used for joining wires to equipment. The term 4 mm connector is also used, especially in Europe, although not all banana connectors will mate with 4 mm parts, and 2 mm banana connectors exist. Various styles of banana plug contacts exist, all based on the concept of spring metal applying outward force into the unsprung cylindrical jack to produce a snug fit with good electrical conductivity. Common types include: a solid pin split lengthwise and splayed slightly, a tip of four-leaf springs, a cylinder with a single leaf spring on one side, a bundle of stiff wire, a central pin surrounded by a multiple-slit cylinder with a central bulge, or simple sheet spring metal rolled into a nearly complete cylinder. The plugs are frequently used to terminate patch cords for electronic test equipment, while sheathed banana plugs are common on multimeter probe leads.

Invention of the plug is claimed by two entities. The Hirschmann company claims it was invented by Richard Hirschmann in 1924.[1] A competing claim is made for the General Radio Company, which stated "1924: GenRad developed banana plug - replaces pin plugs, this spring-loaded connector technology ..." and that it was "introduced in this country [the US] by GR in 1924".[2]

In 1929 Richard Hirschmann was granted a patent for an improved banana plug.[3] The patent describes a banana plug that consists of two parts only. Not needing a small screw to hold the wire in place, like in conventional Bananensteckern (banana plugs), is presented as an advantage of the invention.

The original plug consists of a cylindrical metal pin about 20 millimeters (3⁄4 in) long. This pin length is still common in Europe and other parts of the world. However other sizes have emerged, such as 15 millimeters (5⁄8 in) pins, which can commonly be found in the US. Other lengths between 11 millimeters (3⁄8 in) and 25 millimeters (1 in) are less common.

The pin's diameter is nominally 4 millimeters (3⁄16 in). The pin has one or more lengthwise springs that bulge outwards slightly, giving the appearance of a banana. Taking the springs into account, the actual diameter of a banana plug is typically a bit larger than 4 mm when not plugged in. When inserted into a matching 4 mm socket the springs press against the sides of the socket, improving the electrical contact and preventing the pin from falling out. The other end of the plug has a plug connector to which a length of flexible insulated equipment wire can be attached, which is either screwed, soldered, or crimped into place. On banana plugs for laboratory use, an insulating plastic cover is usually fitted over this rear end of the connector, while banana plugs for speaker connections often use uninsulated metal bodies.

The rear end of a 4 mm plug often has a 4 mm hole drilled in it, either transversely or axially, or both, to accept the pin of another 4 mm plug. This type is called a stackable or stacking plug.

Individual banana plugs and jacks are commonly color-coded red and black, but are available in a wide variety of colors. Dual banana plugs are often black with some physical feature such as a molded ridge or thick tab, marked "Gnd" indicating the relative polarity of the two plugs.

Besides plugging into specific banana jacks, banana plugs may plug into "five-way" or "universal" binding posts on audio equipment. 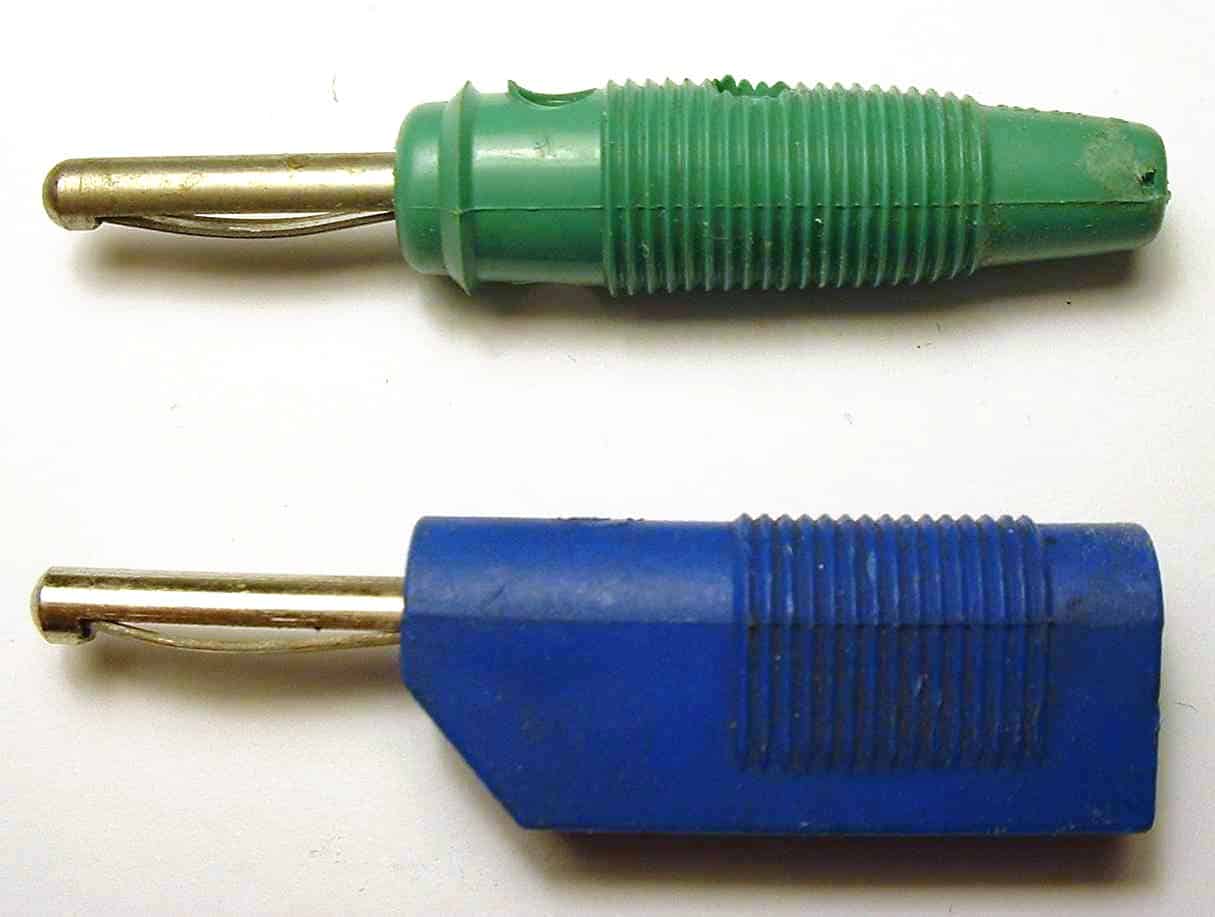 Banana connector
see also
source
Adapted from content published on wikipedia.org
credit
Last modified on May 31, 2020, 9:49 pm
previous
next
Videocide.com is a service provided by Codecide, a company located in Chicago, IL USA.