A fastening mechanism that allows lenses to be changed rapidly and locked accurately in position.

A bayonet mount (mainly as a method of mechanical attachment, as for fitting a lens to a camera) or bayonet connector (for electrical use) is a fastening mechanism consisting of a cylindrical male side with one or more radial pins, and a female receptor with matching L-shaped slot(s) and with spring(s) to keep the two parts locked together. The slots are shaped like a capital letter L with serif (a short upward segment at the end of the horizontal arm); the pin slides into the vertical arm of the L, rotates across the horizontal arm, then is pushed slightly upwards into the short vertical "serif" by the spring; the connector is no longer free to rotate unless pushed down against the spring until the pin is out of the "serif".

The bayonet mount is the standard light bulb fitting in the United Kingdom and in many countries that were members of the British Empire including Pakistan, Australia, Hong Kong, Fiji India, Sri Lanka, Ireland, and New Zealand, parts of the Middle East and Africa and, historically, France and Greece.

Many cameras with interchangeable lenses use a bayonet lens mount to allow lenses to be changed rapidly and locked accurately in position. Camera lens mounts usually employ stronger flattened tabs rather than pins, though their function is the same.

A bayonet mount is often used to mate a cylinder with a base in cylindrical packaging such as that for CD spindles. 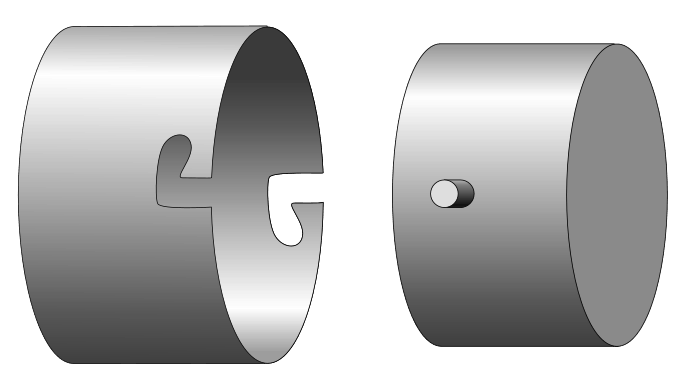 Bayonet mount
see also
source
Adapted from content published on wikipedia.org
credit
Last modified on September 5, 2019, 1:03 am
previous
next
Videocide.com is a service provided by Codecide, a company located in Chicago, IL USA.