Bit block transfer
A computer operation programming that moves a graphic block of bits from one memory location to another.

Blit (a shorthand for bit block transfer) refers to a data operation commonly used in computer graphics in which several bitmaps are combined into one using a boolean function.

The operation involves at least two bitmaps, one source, and destination, possibly a third that is often called the "mask" and sometimes a fourth used to create a stencil. The pixels of each are combined bitwise according to the specified raster operation (ROP) and the result is then written to the destination. The ROP is essentially a boolean formula. The most obvious ROP overwrites the destination with the source. Other ROPs may involve AND, OR, XOR, and NOT operations. The Commodore Amiga's graphics chipset (and others) could combine three source bitmaps using any of the 256 possible boolean functions with three inputs.

Modern graphics software has almost completely replaced bitwise operations with more general mathematical operations used for effects such as alpha compositing. This is because bitwise operations on color displays do not usually produce results that resemble the physical combination of lights or inks. Some software still uses XOR to draw interactive highlight rectangles or region borders; when this is done to color images, the unusual resulting colors are easily seen.

The name derives from the BitBLT routine for the Xerox Alto computer, standing for the bit-boundary block transfer. Dan Ingalls, Larry Tesler, Bob Sproull, and Diana Merry programmed this operation at Xerox PARC in November 1975 for the Smalltalk-72 system. Dan Ingalls later implemented a redesigned version in the microcode.

The development of fast methods for various bit blit operations gave impetus to the evolution of computer displays from using character graphics to using bitmap graphics for everything. Machines that rely heavily on the performance of 2D graphics (such as video game consoles) often have special-purpose circuitry called a blitter.

Blitting is similar to hardware-sprite drawing, in that both systems reproduce a pattern, typically a square area, at different locations on the screen. Hardware sprites have the advantage of being stored in a separate memory, and therefore don't disturb the main display memory. This allows them to be moved about the display, covering the "background", with no effect on it.

Blitting moves the same types of patterns about the screen, but does so by writing into the same memory as the rest of the display. This means every time the pattern is placed on the screen, the display "under" it is overwritten, or "damaged". It is up to the software to clean this damage up by blitting twice, once to remove the damage, and then again to place the bit in its new location. However, there are several ways to optimize this. If large areas of the screen are taken over by the patterns, it may be more efficient to blit the background to the screen instead of erasing each pattern individually. A variation involves dividing the screen into segments and erasing only the segments where patterns have been drawn on. This technique is known as dirty rectangles. 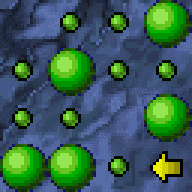 Blit
also known as
see also
resources
source
Adapted from content published on wikipedia.org
credit
Last modified on October 28, 2020, 7:59 am
previous
next
Videocide.com is a service provided by Codecide, a company located in Chicago, IL USA.