A directional microphone mounted on a long pole or arm and positioned over the scene.

The first noted use of a boom mike was on the set of Beggars of Life (1928) when director William A. Wellman wanted a tracking shot of two actors walking down a street, and the sound man refused, telling the director that the actors had to be static and the microphone had to be hidden in a flowery vase. Wellman said "that's crazy" and instructed the sound man to put the microphone on a broom-handle and walk along the actors just outside of the frame. According to David O. Selznick, "I was also present on the stage when a microphone was moved for the first time by Wellman, believe it or not. Sound was relatively new and at that time the sound engineer insisted that the microphone be steady. Wellman, who had quite a temper in those days, got very angry, took the microphone himself, hung it on a boom, gave orders to record—and moved it."

Another instance of a prototype boom mike was on The Wild Party (1929). To allow Clara Bow to move freely on the set, director Dorothy Arzner had technicians rig a microphone onto a fishing rod.

A patent was filed a year later for a very similar sound-recording device by Edmund H Hansen, a sound engineer at the Fox Film Corporation.

Often in television studios, the boom operator will use a "fisher boom", which is a more intricate and specialized piece of equipment on which the operator stands, allowing precise control of the microphone at a greater distance from the actors. They will also attach wireless microphones to persons whose voice requires recording. Boom poles are usually manufactured from several lengths of aluminum or carbon fibre tubing, allowing the boom to be extended and collapsed as the situation requires.

Some poles have a microphone cable routed through the inside of the pole, which may be a regular cable protruding at the bottom end, or a coiled cable that can extend with the pole, connecting to a socket at the base into which the operator plugs the microphone cable. The ideal boom pole is lightweight and strong, supporting the weight of the microphone on the end while adding as little weight as possible.

Frequently, a wind-attenuating cover, called a "blimp" or "mic-blimp", is used to enclose the microphone. A blimp covered with sound-absorbing fuzzy fabric is usually nicknamed a windmuff or a "dead cat". In film crew jargon, the gruesome-sounding phrase dead cat on a stick is simply a boom microphone fitted with a fuzzy wind-screen.

The boom operator and production sound mixer may often be combined into a job performed by one person, usually when the crew number is to be kept minimal, such as for documentaries or news collecting, or in low-budget productions. The one-man unit is often known simply as a "sound recordist" or "sound man", and would perform all on set sound duties.

The boom operator must decide where to place the microphone based on a combination of factors, including the location and projection of any dialogue, the frame position of the camera, the source of lighting (and hence shadows) and any unwanted noise sources. Often the boom operator will need to be as familiar with the script as are the actors, as they may be required to tilt or move the microphone according to who is speaking.

In productions with a bigger budget, more than one boom operator may be used, with each operator focusing on a different actor.

Having the boom mic or its shadow appear on the screen in a completed picture is considered a sign of poor film-making. Notable examples include the mic's shadow appearing above two crewmen flying a plane in Plan 9 from Outer Space and the mic itself dipping into the frame numerous times in Rudy Ray Moore's film Dolemite. The TV Tropes wiki has a list on its "Visible Boom Mic" trope page demonstrating more examples. Pastiches of bad film-making may also use boom mic visibility to spoof their material. 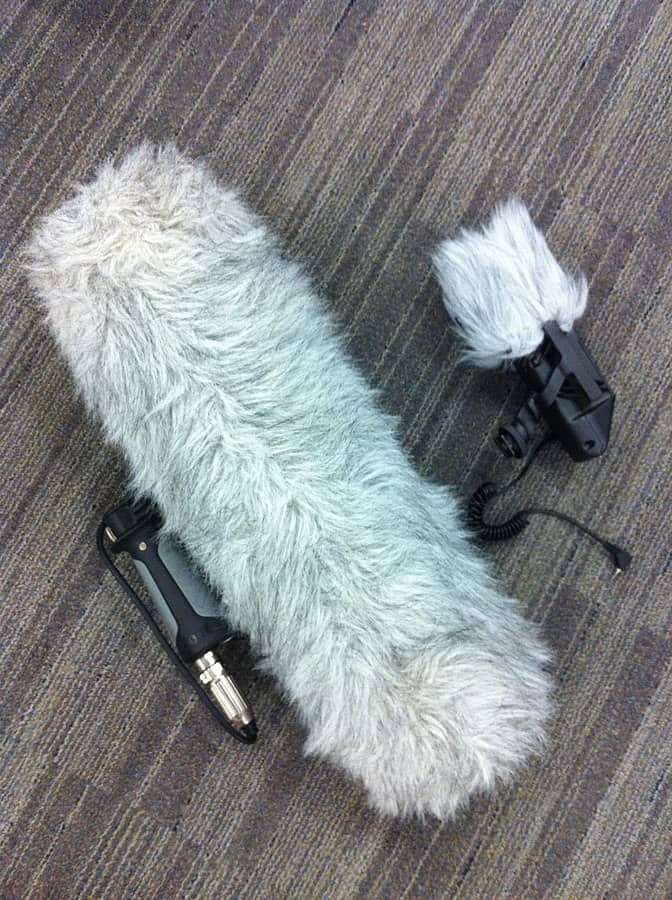