Window Dub
A videotape in which a "window" displaying the time code count on the tape is superimposed over part of the picture.

In video production and filmmaking, SMPTE timecode is used extensively for synchronization, and for logging and identifying material in recorded media. During filmmaking or video production shoot, the camera assistant will typically log the start and end timecodes of shots, and the data generated will be sent on to the editorial department for use in referencing those shots. This shot-logging process was traditionally done by hand using pen and paper, but is now typically done using shot-logging software running on a laptop computer that is connected to the time code generator or the camera itself.

Keykode, while not a timecode, is used to identify specific film frames in film post-production that uses physical film stock. Keykode data is normally used in conjunction with SMPTE time code.

Rewritable consumer timecode is a proprietary consumer video timecode system that is not frame-accurate, and is therefore not used in professional post-production. 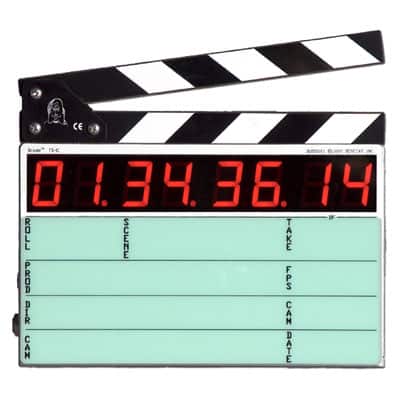