A paintbrush with soft bristles used to clean lenses.

Camel-hair brushes are used for a variety of purposes, including dusting and cleaning delicate objects such as camera lenses and small electronic equipment. A camel-hair brush is a type of paintbrush with soft bristles made from natural hairs. Historically, camel hair was used for ancient Chinese ink brushes, though it is now considered an inferior material for painting. It is used widely in art but is still thought to be inferior to the more expensive sable and ox-hair brushes. In some niche applications, such as pinstriping, camel hair is an ideal brush.

The bristles of camel-hair brushes are traditionally made of squirrel hair and this is still the most common material. They can also be made from goat, ox, or pony or a blend of any of these. They are never made from camel hair, either in whole or in part.

Camel-hair brushes are a soft brush. They are a considerably cheaper alternative to the expensive kolinsky sable-hair brush (a red sable), considered the best brush for watercolor painting. However, they are inferior in that they lack the springiness and natural point of red sable.

Cheaper camel-hair brushes, such as those supplied to schools, are usually mass-produced from pony hair cut from the mane. Pony is used because the long mane hairs can be cut up by machine to make many brushes simultaneously. However, the cut ends are not so good at coming to a point as the natural tips.

Camel-hair brushes can be used for watercolor painting but are not the best choice. They are poor where good points are required and do not hold their shape well when in contact with water. They are, however, good for large flat brushes when broad areas are being painted.

Camel-hair brushes are used in signwriting. They are problematic with watercolors as already stated. They also do not perform well with heavy paints, especially the formerly widely used white lead-based paints. The weight of the paint tends to make the brush collapse.

Pinstriping is the application of thin decorative lines to an object. This can range from simple coachlines down the side of motor cars, to elaborate decoration of furniture. Pinstriping brushes are traditionally camel-hair brushes. These are sometimes called striping pencils and are small brushes with very long bristles. The idea of the length is to hold a greater amount of paint so that very long lines can be painted in one stroke. Pinstripers originally made their own brushes (and sometimes still do) from the bristles of a larger camel-hair brush, but dedicated brushes are now available. One of the earliest such brushes was designed by Andrew Mack in 1891, a carriage striper for the J.J. Deal wagon and buggy company in Jonesville, Michigan. Mack was dissatisfied with the brushes supplied by the Deal company and made his own. These became so popular with other pinstripers around the country that he left Deal to set up his own company, the Mack Brush Company, which still makes highly regarded pinstriping brushes in Michigan.

Woodworking has many uses for camel-hair brushes. As with watercolor, fine work is better done with a sable brush but camel hair can be used for applying finishes. Camel's hair is also less effective at working into corners or to a line because of the poorer point (or edge) on the tip.

The brushes barbers use to remove the loose hairs from the back of the customer's neck can be camel hair. They are also the preferred brushes for surgeons, dentists, and jewelers. Their soft bristles make them ideal for cleaning dust from delicate equipment or materials, such as film or stills cameras. 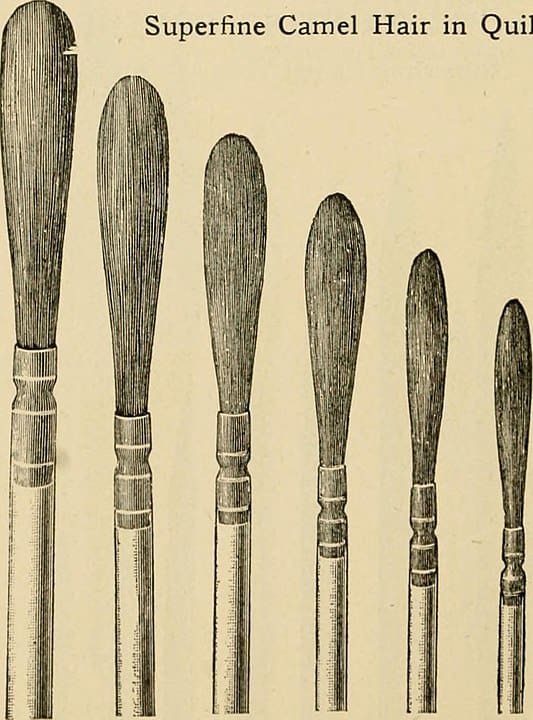