An electronic vacuum tube used to display images on a phosphorescent screen.

The cathode-ray tube (CRT) is a vacuum tube. It is used to display images on a screen. It contains an electron gun, and this gun shoots electrons toward the phosphorescent screen. The screen glows, and the image appears.

The CRT modulates, accelerates, and deflects electron beam(s) onto the screen to create the images. The images may represent electrical waveforms (oscilloscope), pictures (television, computer monitor), radar targets, or other phenomena.

CRTs have also been used as memory devices, in which case the visible light emitted from the fluorescent material (if any) is not intended to have significant meaning to a visual observer (though the visible pattern on the tube face may cryptically represent the stored data).

In television sets and computer monitors, the entire front area of the tube is scanned repetitively and systematically in a fixed pattern called a raster. In color devices, an image is produced by controlling the intensity of each of the three electron beams, one for each additive primary color (red, green, and blue) with a video signal as a reference. In all modern CRT monitors and televisions, the beams are bent by magnetic deflection, a varying magnetic field generated by coils and driven by electronic circuits around the neck of the tube, although electrostatic deflection is commonly used in oscilloscopes, a type of electronic test instrument.

A CRT is constructed from a glass envelope that is large, deep (i.e., long from front screen face to rear end), fairly heavy, and relatively fragile. The interior of a CRT is evacuated to approximately 0.01 pascals (9.9×10−8 atm) to 133 nanopascals (1.31×10−12 atm), evacuation being necessary to facilitate the free flight of electrons from the gun(s) to the tube's face. The fact that it is evacuated makes handling an intact CRT potentially dangerous due to the risk of breaking the tube and causing a violent implosion that can hurl shards of glass at great velocity. As a matter of safety, the face is typically made of thick lead glass so as to be highly shatter-resistant and to block most X-ray emissions, particularly if the CRT is used in a consumer product.

Since the late 2000s, CRTs have been largely superseded by newer "flat panel" display technologies such as LCD, plasma display, and OLED displays, which have lower manufacturing costs and power consumption, as well as significantly less weight and bulk. Flat-panel displays can also be made in very large sizes; whereas 38 to 40 in (97 to 102 cm) was about the largest size of a CRT television, flat panels are available in 85 in (220 cm) and even larger size 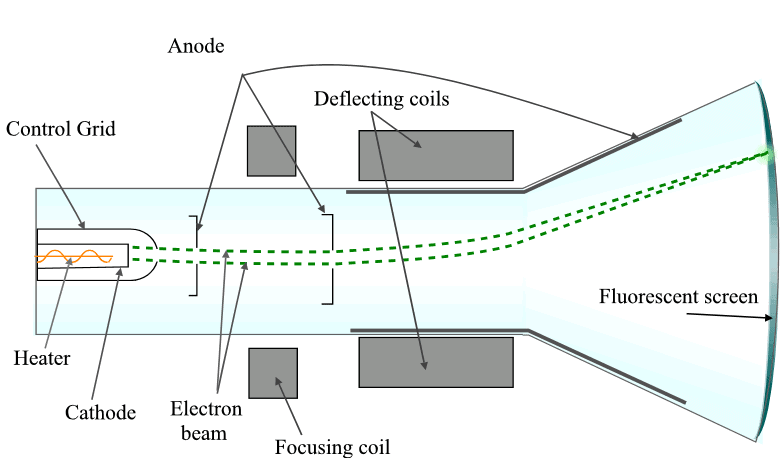