The analog video display standard for Japan. It ceased operations in 2011.

CCIR System J, also known as NTSC-J, was the analog video display standard for Japan. It ceased operations in 2011.

The standard was nearly identical to CCIR System M, its American counterpart. While NTSC-M is an official standard, "J" is more a colloquial indicator as used in Marketing definition (below) but not an official term.

It is based on 'regular' NTSC but is slightly different. The black level and blanking level of the NTSC-J signal are identical (at 0 IRE), as they are in PAL, another video standard, while in American NTSC, black level is slightly higher (7.5 IRE) than blanking level. Because of the way this appears in the waveform, the higher black level is also called pedestal. Since the difference is quite small, a slight change of the brightness setting is all that is required to enjoy the "other" variant of NTSC on any set as it is supposed to be.

NTSC-J also uses a white reference (color temperature) of 9300K instead of the usual NTSC standard of 6500K.

The over-the-air RF frequencies in use in Japan do not match those of the US NTSC standard; there are also international differences in the frequency allocations for other services such as FM radio. The encoding of the stereo subcarrier also differs between NTSC-M/MTS and the Japanese broadcast standards.
Marketing definition

The term NTSC-J is also used to distinguish regions in console video games, which use televisions. NTSC-J is used as the name of the video gaming region of Japan (hence the "J"), South East Asia (some countries only), Taiwan, Hong Kong, Macau, Philippines and South Korea (now NTSC-K) (formerly part of SE Asia with Hong Kong, Taiwan, Japan, etc.).

Most games designated as part of this region will not run on hardware designated as part of the NTSC-US, PAL (or PAL-E, "E" stands for Europe) or NTSC-C (for China) mostly due to the regional differences of the PAL (SECAM was also used in the early 1990s) and NTSC standards. Many older video game systems do not allow games from different regions to be played, however more modern consoles, either leave the protection to the discretion of publishers such as microsoft's Xbox 360 or discontinue its use entirely like sony's PlayStation 3.

China received its own designation due to fears of an influx of illegal copies flooding out of China, which is notorious for its rampant copyright infringements. There is also a concern of copyright protection through regional lockout built into the video game systems and games themselves, as the same product can be edited by different publishers from one continent to another. 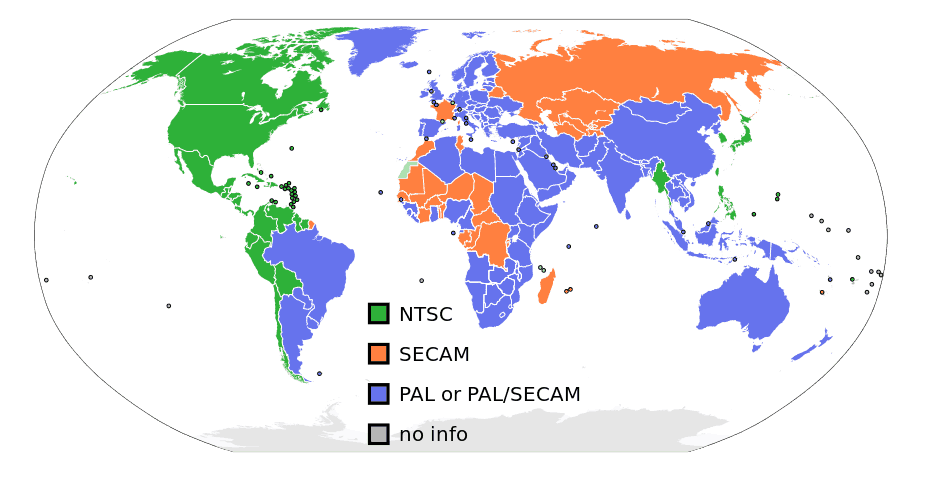