The 525-line analog broadcast television system used since July 1941 in the United States, most of the Americas, Caribbeans, South Korea, and Taiwan.

CCIR System M is the 525-line analog broadcast television system used since July 1941 in the United States, most of the Americas, the Caribbeans, South Korea, and Taiwan.

The systems were given their letter designations in the ITU identification scheme adopted in Stockholm in 1961. Both System M and System J display 525 lines of video at 30 frames per second using 6 MHz spacing between channel numbers and is used for both VHF and UHF channels.

Currently (as of 2015), System M and J is being replaced by digital broadcasting such as the Americas, Japan, South Korea, Taiwan, and the Philippines.

Television color encoding by nation; Brazil (PAL-M) and all green countries (NTSC) are based on monochrome System M.

Strictly speaking, System M does not designate how color is transmitted. However, in nearly every System M country, NTSC is used for color television, a combination called NTSC-M, but usually referred to more recently as simply "NTSC" because of the relative lack of importance of black-and-white television. In NTSC-M and Japan's NTSC-J, the frame rate is offset slightly, becoming 30⁄1.001 frames per second, usually labeled as the rounded number 29.97.

The main exception to NTSC is Brazil, where PAL color is used instead, resulting in the PAL-M combination unique to that country, which is monochrome-compatible with other System M countries, but not compatible with other PAL countries, which use different basic systems as their base. PAL-M signals are at 30 frames per second instead of slowing down to 29.97 like NTSC. 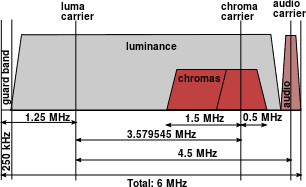