A special version of HTML for remote-controlled consumer electronic devices.

CE-HTML is a special version of HTML for remote-controlled consumer electronic devices. The scripting language was designed to allow controlling those devices over home networks and Internet connections. Like HTML, CE-HTML is based on the XHTML standard. It is optimized to deploy user interfaces that can scale gracefully on a variety of screen sizes and geometries, including those of mobile devices and high-definition television sets.

CE-HTML can both be used in-home through UPnP as via the Internet. It allows the content creator to use the common and known languages in the web to define a user interface that can be controlled on a CE device. A CE-HTML client typically consists of a web browser adapted for the CE-HTML standard running on a consumer electronics device. CE-HTML offers specific extensions for these browsers such as :

CE-HTML was developed within the Consumer Electronics Association R7WG9 working group – consisting of a number of CE-manufacturers – to formulate an answer to the problem of displaying HTML (web) content on a device that does not possess the characteristics of a typical personal computer. CE devices have problems displaying regular web pages because these pages make use of:

Further difficulties with using a CE device to display web content are caused by the fact that CE devices typically have different capabilities such as different resolutions, remote controls, and audio/video codecs. 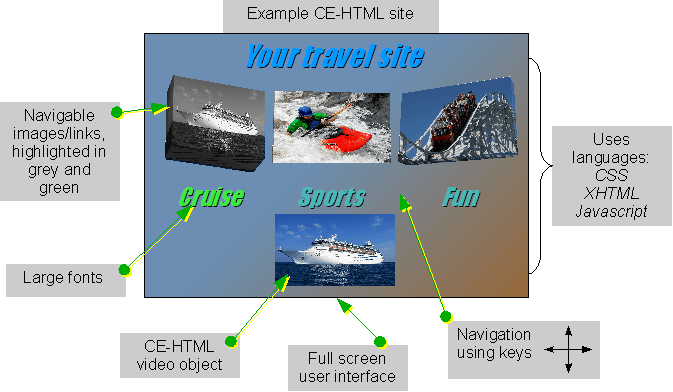 CE-HTML
see also
resource
source
Adapted from content published on wikipedia.org
credits
Last modified on April 20, 2021, 1:16 am
previous
next
Videocide.com is a service provided by Codecide, a company located in Chicago, IL USA.