An integrated circuit that converts light into electrical charges.

Charge-coupled device (CCD) sensors are a major technology used in digital imaging. A CCD is an integrated circuit that converts light into electrical charges. The common CCD technology for cameras is called a charge-coupled image sensor. CCD circuits contain an array of linked (coupled) capacitors. Under the control of an external circuit, each capacitor can transfer its electric charge to a neighboring capacitor.

A charge-coupled device is an integrated circuit that converts light into electrical charges, which the camera's circuits then convert into images. CCD circuits contain an array of linked (coupled) capacitors. Under the control of an external circuit, each capacitor can transfer its electric charge to a neighboring capacitor. CCD sensors are a major technology used in digital imaging.

In a CCD image sensor, pixels are represented by p-doped metal–oxide–semiconductor (MOS) capacitors. These MOS capacitors, the basic building blocks of a CCD, are biased above the threshold for inversion when image acquisition begins, allowing the conversion of incoming photons into electron charges at the semiconductor-oxide interface; the CCD is then used to read out these charges. Although CCDs are not the only technology to allow for light detection, CCD image sensors are widely used in professional, medical, and scientific applications where high-quality image data are required. In applications with less exacting quality demands, such as consumer and professional digital cameras, active pixel sensors, also known as CMOS sensors (complementary MOS sensors), are generally used. However, the large quality advantage CCDs enjoyed early on has narrowed over time.

In a CCD for capturing images, there is a photoactive region (an epitaxial layer of silicon), and a transmission region made out of a shift register (the CCD, properly speaking).

An image is projected through a lens onto the capacitor array (the photoactive region), causing each capacitor to accumulate an electric charge proportional to the light intensity at that location. A one-dimensional array, used in line-scan cameras, captures a single slice of the image, whereas a two-dimensional array, used in video and still cameras, captures a two-dimensional picture corresponding to the scene projected onto the focal plane of the sensor. Once the array has been exposed to the image, a control circuit causes each capacitor to transfer its contents to its neighbor (operating as a shift register). The last capacitor in the array dumps its charge into a charge amplifier, which converts the charge into a voltage. By repeating this process, the controlling circuit converts the entire contents of the array in the semiconductor to a sequence of voltages. In a digital device, these voltages are then sampled, digitized, and usually stored in memory; in an analog device (such as an analog video camera), they are processed into a continuous analog signal (e.g. by feeding the output of the charge amplifier into a low-pass filter), which is then processed and fed out to other circuits for transmission, recording, or other processing.

Digital color cameras generally use a Bayer mask over the CCD. Each square of four pixels has one filtered red, one blue, and two green (the human eye is more sensitive to green than either red or blue). The result of this is that luminance information is collected at every pixel, but the color resolution is lower than the luminance resolution.

Better color separation can be reached by three-CCD devices (3CCD) and a dichroic beam splitter prism, that splits the image into red, green, and blue components. Each of the three CCDs is arranged to respond to a particular color. Many professional video camcorders, and some semi-professional camcorders, use this technique, although developments in competing CMOS technology have made CMOS sensors, both with beam-splitters and bayer filters, increasingly popular in high-end video and digital cinema cameras. Another advantage of 3CCD over a Bayer mask device is higher quantum efficiency (and therefore higher light sensitivity for a given aperture size). This is because in a 3CCD device most of the light entering the aperture is captured by a sensor, while a Bayer mask absorbs a high proportion (about 2/3) of the light falling on each CCD pixel.

For still scenes, for instance, in microscopy, the resolution of a Bayer mask device can be enhanced by micro scanning technology. During the process of color co-site sampling, several frames of the scene are produced. Between acquisitions, the sensor is moved in pixel dimensions, so that each point in the visual field is acquired consecutively by elements of the mask that are sensitive to the red, green and blue components of its color. Eventually, every pixel in the image has been scanned at least once in each color and the resolution of the three channels becomes equivalent (the resolutions of red and blue channels are quadrupled while the green channel is doubled). 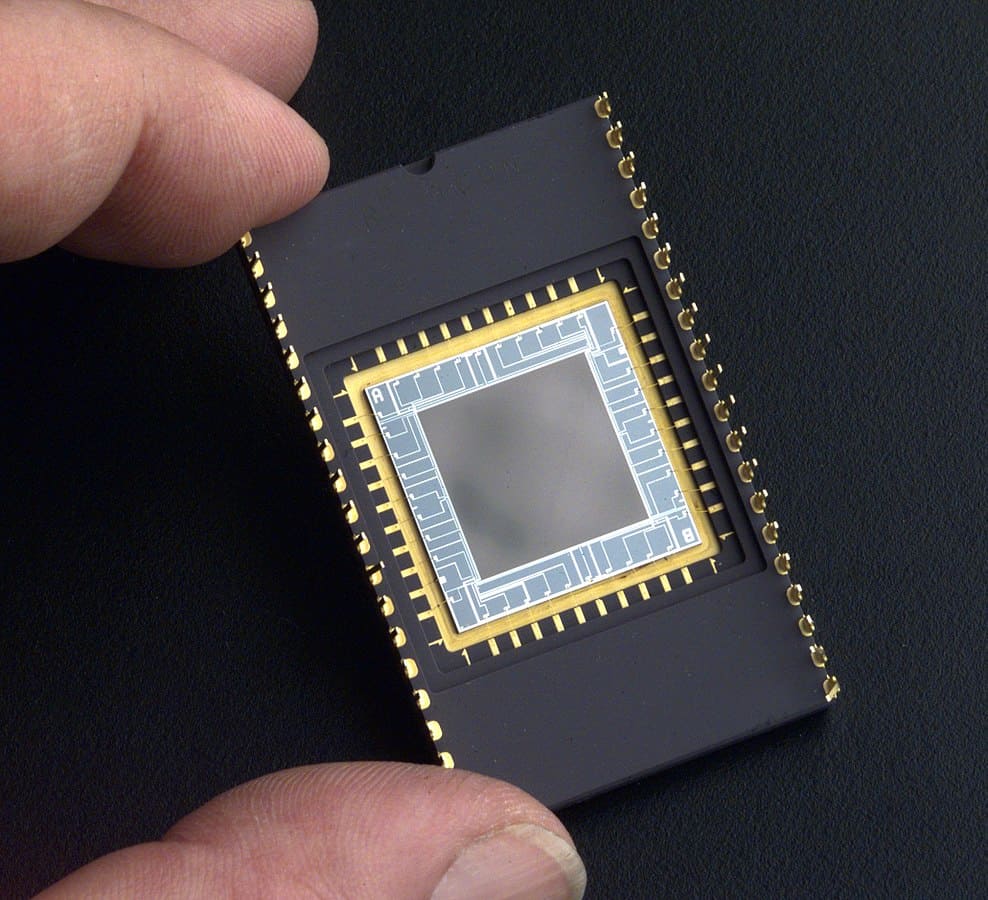