Visual inconsistencies that occur when the camera lens fails to focus all colors to the same point.

In photography, chromatic aberration is the result of a failure of a lens to focus all colors to the same point. It is caused by dispersion, which refers to a material's property of having a refractive index that varies with the wavelength of light. Dispersion in most transparent materials makes it impossible to focus all wavelengths of light to focus at exactly the same point.

Since the focal length of a lens depends on the refractive index, this variation in refractive index affects focusing. Chromatic aberration manifests itself as "fringes" of color along boundaries that separate dark and bright parts of the image.

The two types of chromatic aberration have different characteristics and may occur together. Axial CA occurs throughout the image and is specified by optical engineers, optometrists, and vision scientists in diopters. It can be reduced by stopping down, which increases the depth of field so that though the different wavelengths focus at different distances, they are still in acceptable focus. Transverse CA does not occur in the center of the image and increases towards the edge. It is not affected by stopping down.

In digital sensors, axial CA results in the red and blue planes being defocused (assuming that the green plane is in focus), which is relatively difficult to remedy in post-processing, while transverse CA results in the red, green, and blue planes being at different magnifications (magnification changing along radii, as in geometric distortion), and can be corrected by radially scaling the planes appropriately so they line up.

The term "purple fringing" is commonly used in photography, although not all purple fringing can be attributed to chromatic aberration. Similar colored fringing around highlights may also be caused by lens flare. Colored fringing around highlights or dark regions may be due to the receptors for different colors having differing dynamic range or sensitivity – therefore preserving detail in one or two color channels, while "blowing out" or failing to register, in the other channel or channels. On digital cameras, the particular demosaicing algorithm is likely to affect the apparent degree of this problem. Another cause of this fringing is a chromatic aberration in the very small microlenses used to collect more light for each CCD pixel; since these lenses are tuned to correctly focus green light, the incorrect focusing of red and blue results in purple fringing around highlights. This is a uniform problem across the frame and is more of a problem in CCDs with a very small pixel pitch such as those used in compact cameras. Some cameras, such as the Panasonic Lumix series and newer Nikon and Sony DSLRs, feature a processing step specifically designed to remove it.

On photographs taken using a digital camera, very small highlights may frequently appear to have chromatic aberration where in fact the effect is because the highlight image is too small to stimulate all three color pixels, and so is recorded with an incorrect color. This may not occur with all types of digital camera sensors. Again, the de-mosaicing algorithm may affect the apparent degree of the problem. 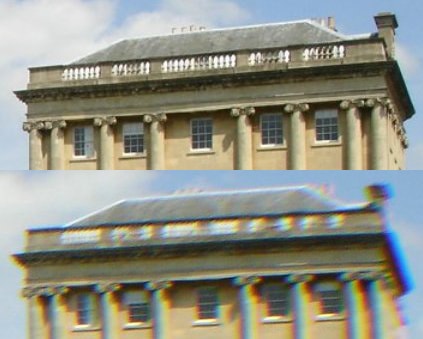