Chromostereoscopy is an application of chromostereopsis and a component of 3D TV technology. The technology uses a technique where red-colored objects appear closer than blue-colored ones, thereby giving the impression of depth. This 3-D effect requires the viewer to wear special glasses.

Chromostereopsis is a visual illusion whereby the impression of depth is conveyed in two-dimensional color images, usually of red-blue or red-green colors, but can also be perceived with red-grey or blue-grey images. Such illusions have been reported for over a century and have generally been attributed to some form of chromatic aberration.

It has been proposed that chromostereopsis could have evolutionary implications in the development of eyespots in certain butterfly species. Additionally, it is posited that some stained-glass artists may have been aware of this effect, using it to generate advancing or receding, sometimes referred to as "warm" and "cold", color images.

The effect can appear much more pronounced when suitable images are viewed while wearing eyeglasses needed to correct myopia. With the effect almost completely disappearing when the glasses are removed.

Over two centuries ago, the effect of color depth perception was first noted by Goethe in his Farbenlehre (Theory of Colours) in which he recognized blue as a receding color and yellow/red as a protruding color. He argued that "like we see the high sky, the far-away mountains, like blue, in the same way a blue field seems to recede…(also) One can stare at a perfectly yellow/red field, then the color seems to pierce into the organ". This phenomenon, now referred to as chromostereopsis, or the stereoptic effect, explains the visual science behind this color depth effect and has many implications for art, media, evolution, as well as our daily lives in how we perceive colors and objects.

Although Goethe did not propose any scientific reasoning behind his observations, in the late 1860s Bruecke and Donders first suggested that the chromostereoptic effect was due to accommodative awareness, given that ocular optics are not achromatic and red objects require more accommodation to be focused on the retina. This notion of accommodation could then be translated into perception of distance. However, what Donders and Bruecke originally missed in their theory is the necessity of binocular observation to produce chromostereopsis. Later, veering off from accommodative awareness, Bruecke proposed that chromatic aberration, along with the temporal off-axis effect of the pupil, can explain the chromostereoptic effect. It is this hypothesis that still forms the basis for our present-day understanding of chromostereopsis.

Over the years, art analysis has provided ample evidence of the chromostereoptic effect, but until about thirty years ago little was known about the neurological, anatomical, and/or physiological explanation behind the phenomena. For example, in 1958 Dutch art historian De Wilde noted that in analyzing cubist painter Leo Gestel's painting "The Poet Rensburg", instead of using conventional graded depth cues, "If you put violet next to yellow or green next to orange, the violet and the green retreat. In general, the warm colors come forward, and the cool colors retreat". In this sense, the chromostereoptic effect gives shape plasticity and allows for depth perception through color manipulation.

The binocular nature of the chromostereopsis was discovered by Bruecke and arises due to the position of the fovea relative to the optical axis. The fovea is located temporally to the optical axis and as a result, the visual axis passes through the cornea with a nasal horizontal eccentricity, meaning that the average ray bound for the fovea must undergo prismatic deviation and is thus subject to chromatic dispersion. The prismatic deviation is in opposite directions in each eye, resulting in opposite color shifts that lead to a shift in stereoptic depth between red and blue objects. The eccentric foveal receptive system, along with the Stiles-Crawford effect, work in opposite directions of one another and roughly cancel out, offering another explanation to why subjects may show color stereoscopy "against the rule" (a reversal of the expected results).

Evidence for the stereoptic effect is often quite easy to see. For example, when red and blue are viewed side by side on a dark surrounding, most people will view the red as "floating" in front of the blue. However, this is not true for everyone, as some people see the opposite and others no effect at all. This is the same effect that both Goethe and De Wilde had indicated in their observations. While a majority of people will view red as "floating" in front of blue, others experience a reversal of the effect in which they see blue floating in front of the red, or no depth effect at all. While this reversal may appear to discredit chromostereopsis, it does not and instead, as originally proposed by Einthoven, can be explained by an increase in the effect and subsequent reversal via blocking of the eccentric position of the pupil with respect to the optical axis. The diverse nature of the chromostereoptic effect is because the color depth effect is closely intertwined with both perceptual and optical factors. In other words, neither the optical nor the perceptual factors can be taken in insolation to explain chromostereopsis. This multifactorial component of chromostereopsis offers one explanation of the reversal of the effect in different people given the same visual cues.

Another interesting reversal effect was observed in 1928 by Verhoeff in which the red bars were perceived as farther away and the blue bars as protruding when the bars are paired on a white background instead of a black background. Verhoeff proposed that this paradoxical reversal can be understood in terms of the pupil's luminance contours (see: Illusory Contours). The pupil has lines of constant luminance efficiency, with each subsequent line marking a 25% decrease in efficiency. Around 1998, Winn and co-workers confirmed Verhoeff's interpretation of this reversal using experiments on different colored backgrounds. Other research has also suggested that border contrast changes could lead to color depth reversal with the switch from black to white backgrounds.

In 1933, Stiles and Crawford discovered that the light sensitivity of the fovea differs significantly for rays entering the eye through the center of the pupil versus rays entering from its peripheral regions. They observed that the usual "intensity multiplied by aperture" rule did not apply in foveal vision and that rays entering the eye via peripheral regions of the pupil were less efficient by roughly a factor of five. This effect is now known as the Stiles-Crawford effect and also has implications for the reverse chromostereoptic effect.

In 1885, Einthoven proposed a theory which states: "The phenomenon (chromostereopsis) is due to chromatic difference of magnification, for since, for example, blue rays are refracted more than red rays by the ocular media, their foci not only lie at different levels (chromatic aberration) but make different angles with the optic axis, and will thus stimulate disparate points. It follows that individuals with temporally eccentric pupils see red in front of blue, while with nasally eccentric pupils the relief is reversed." Einthoven first explained chromatic aberration in the eye, which means that the eyes will not focus all the colors at the same time. Depending on the wavelength, the focal point in the eyes varies. He concluded that the reason why people see red in front of blue is because light with different wavelengths project onto different parts of the retina. When the vision is binocular, a disparity is created, which causes depth perception. Since red is focused temporally, it appears to be in front. However, under monocular vision, this phenomenon is not observed. 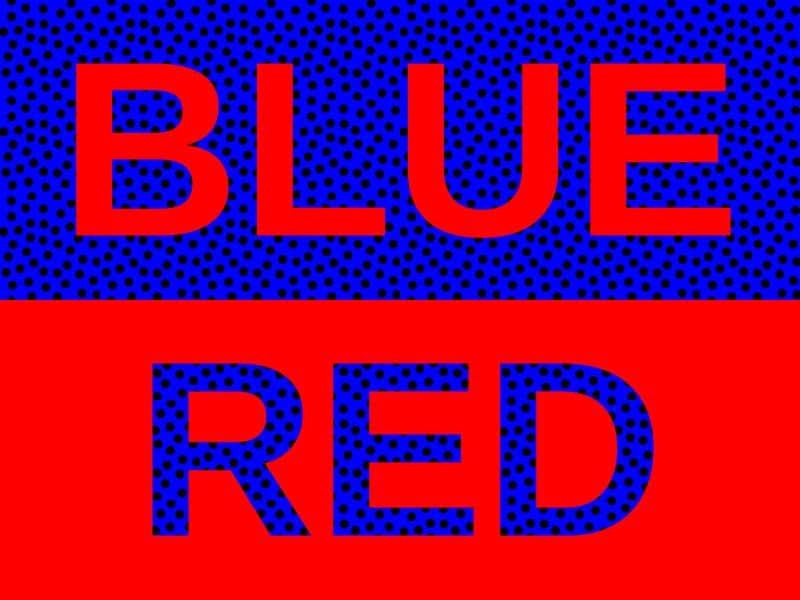