An antique photographic technique that uses a series of photographs of a moving object for the purpose of displaying successive phases of the motion.

Chronophotography refers to a photographic technique used for recording successive phases of the motion of an object over time. The technique was used from the Victorian era and predates the development of video technology by several decades.

The best-known chronophotography works were mostly intended for the scientific study of locomotion, to discover practical information for animal handlers and/or as reference material for artists. Although many results were not intended to be exhibited as moving pictures, there is much overlap with the more or less simultaneous quest to register and exhibit photographic motion pictures.

Chronophotography is defined as "a set of photographs of a moving object, taken for the purpose of recording and exhibiting successive phases of motion". The term chronophotography was coined by French physiologist Étienne-Jules Marey to describe photographs of movement from which measurements could be taken and motion could be studied. It is derived from the Greek word χρόνος chrónos ("time") combined with photography.

Chronophotography's original purpose was to help scientists study objects in motion, primarily humans and animals. It was also used for practical purposes, such as judging timed events and recording historical ones (horse and dog races, performances), and studying the movement of projectiles for war. With Anschutz's development of non-scientific, entertaining chronophotographs, chronophotography became the basis for the invention and development of cinematography. Due to the development of projection devices (Muybridge's zoopraxiscope, Anschutz's electrotachyscope, and ultimately, Albert Londe's high-speed multi-exposure camera which ran the film through a projector in a new way), the display of chronophotographs as entertainment became more sophisticated and useful than ever before. Before long, cinematic devices spawned from original chronophotographic predecessors, with which audiences could watch continuous loops of entertaining activities (for example, the “peep show” devices built using Thomas Edison’s backlighting technology). From these developments in history, cinematography and silent film of moving images were invented.

Romanian neurologist Gheorghe Marinescu made the 1898 film Walking Troubles of Organic Hemiplegy, inspired by his earlier work using chronophotography under the influence of Marey. The short film shows patients walking in four directions against a black background before and after treatment. This and Marinescu's related films are considered early documentary films. The professor called his works "studies with the help of the cinematograph," and published the results, along with several consecutive frames, in issues of "La Semaine Médicale" magazine from Paris, between 1899 and 1902.

As photography became the dominant source of an accurate depiction of life, art no longer necessarily had to capture life. Now liberated from the one-to-one relationship between a fixed coordinate in space captured at a single moment in time assumed by classical vanishing-point perspective, the artist became free to explore notions of simultaneity, whereby several positions in space captured at successive time intervals could be depicted within the bounds of a single painting. Cubist works regularly depicted multiple angles within a frame, and multiple aspects of time and motion can be recognized in several related paintings, including Jean Metzinger's Danseuse au café (Dancer in a Café) (1912). Marcel Duchamp's famous Nu descendant un escalier n° 2 (Nude Descending a Staircase, No. 2) (1912) was directly influenced by Muybridge's Woman Walking Downstairs (1887) and the works of Marey. 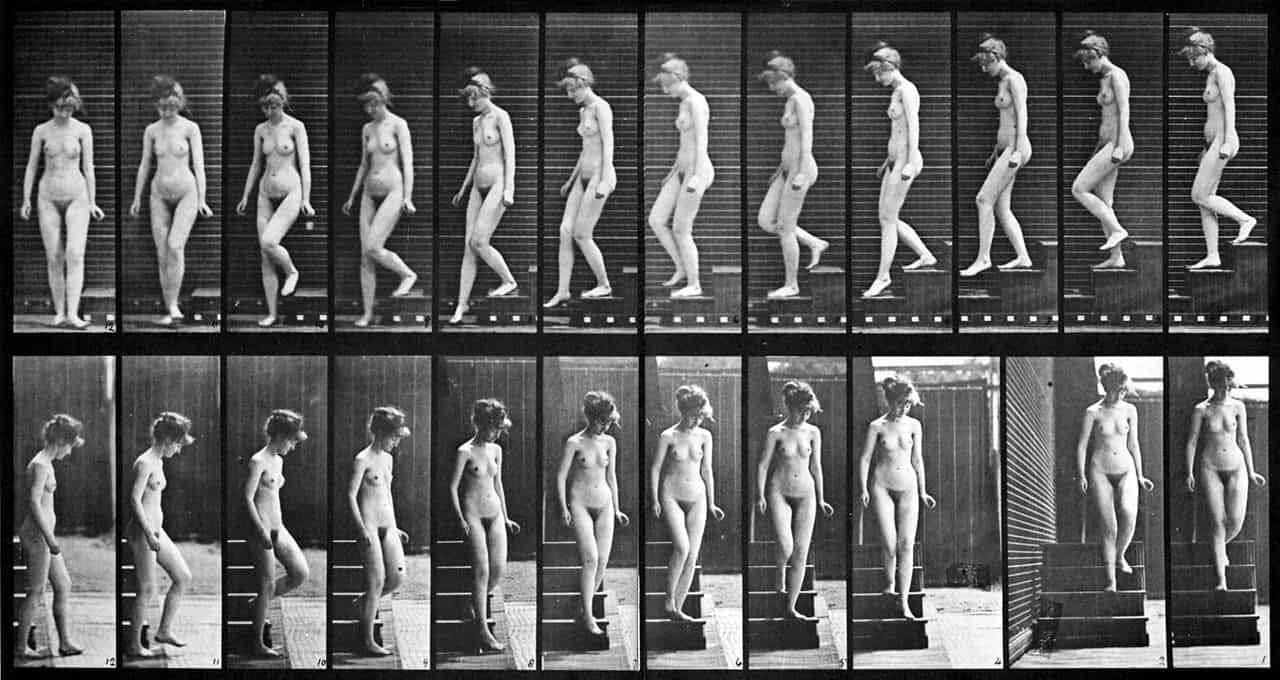 Chronophotography
see also
resources
source
Adapted from content published on wikipedia.org
credit
Last modified on May 1, 2021, 8:25 am
previous
next
Videocide.com is a service provided by Codecide, a company located in Chicago, IL USA.