The international authority on light, illumination, color, and color spaces.

The International Commission on Illumination is an organization that sets international standards related to light and color. Though founded in 1913, "1931" refers to the date of its eighth session, during which the members established an international agreement on colorimetric specification.

The CIE 1931 color spaces were the first defined quantitative links between distributions of wavelengths in the electromagnetic visible spectrum and physiologically perceived colors in human color vision. The mathematical relationships that define these color spaces are essential tools for color management, important when dealing with color inks, illuminated displays, and recording devices such as digital cameras.

A color space maps a range of physically produced colors from mixed-light, pigments, etc. to an objective description of color sensations registered in the human eye, typically in terms of tristimulus values, but not usually in the LMS color space defined by the spectral sensitivities of the cone cells. The tristimulus values associated with a color space can be conceptualized as amounts of three primary colors in a tri-chromatic, additive color model. In some color spaces, including the LMS and XYZ spaces, the primary colors used are not real colors in the sense that they cannot be generated in any light spectrum.

The CIE XYZ color space encompasses all color sensations that are visible to a person with average eyesight. That is why CIE XYZ (Tristimulus values) is a device-invariant representation of the color. It serves as a standard reference against which many other color spaces are defined. A set of color-matching functions, like the spectral sensitivity curves of the LMS color space, but not restricted to non-negative sensitivities, associates physically produced light spectra with specific tristimulus values.

Most wavelengths stimulate two or all three kinds of cone cells because the spectral sensitivity curves of the three kinds overlap. Certain tristimulus values are thus physically impossible, for example, LMS tristimulus values that are non-zero for the M component and zero for both the L and S components. Furthermore, LMS tristimulus values for pure spectral colors would, in any normal trichromatic additive color space, e. g. the RGB color spaces, imply negative values for at least one of the three primaries because the chromaticity would be outside the color triangle defined by the primary colors. To avoid these negative RGB values, and to have one component that describes the perceived brightness, "imaginary" primary colors, and corresponding color-matching functions were formulated. The CIE 1931 color space defines the resulting tristimulus values, in which they are denoted by "X", "Y", and "Z". In XYZ space, all combinations of non-negative coordinates are meaningful, but many, such as the primary locations [1, 0, 0], [0, 1, 0], and [0, 0, 1], correspond to imaginary colors outside the space of possible LMS coordinates; imaginary colors do not correspond to any spectral distribution of wavelengths and therefore have no physical reality. 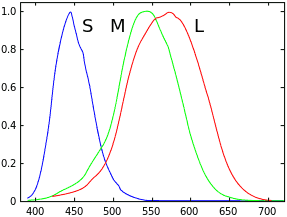 CIE 1931
acronymn
also known as
see also
resources
source
Adapted from content published on wikipedia.org
credit
Last modified on May 1, 2021, 9:47 am
previous
next
Videocide.com is a service provided by Codecide, a company located in Chicago, IL USA.