A system of anamorphic lenses and widescreen (2.35:1) projection.
CinemaScope is an anamorphic lens series used, from 1953 to 1967, for shooting widescreen movies so that they could be screened in movie theatres using existing equipment.

Its creation in 1953 by Spyros P. Skouras, the president of 20th Century Fox, marked the beginning of the modern anamorphic format in both principal photography and movie projection.

The anamorphic lenses theoretically allowed the process to create an image of up to a 2.66:1 aspect ratio, almost twice as wide as the previously common Academy format's 1.37:1 ratio. Although the technology behind the CinemaScope lens system was made obsolete by later developments, primarily advanced by Panavision, CinemaScope's anamorphic format has continued to this day. In film-industry jargon, the shortened form, 'Scope, is still widely used by both filmmakers and projectionists, although today it generally refers to any 2.35:1, 2.39:1, 2.40:1 or 2.55:1 presentation or, sometimes, the use of anamorphic lensing or projection in general. Bausch & Lomb won a 1954 Oscar for its development of the CinemaScope lens. 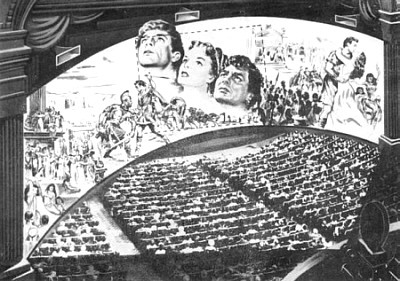 Cinemascope
also known as
see also
resources
source
Adapted from content published on wikipedia.org
credit
Last modified on May 4, 2021, 9:03 pm
previous
next
Videocide.com is a service provided by Codecide, a company located in Chicago, IL USA.