The brand name of an early widescreen projection process.

Cinerama is the brand name of an early (1952-1962) widescreen projection process that used three synchronized projectors to display images simultaneously onto a huge curved screen -- the latter subtending 146° of arc.

The trademarked process was marketed by the Cinerama corporation. It was the first of a number of novel processes introduced during the 1950s when the movie industry was reacting to competition from television. Cinerama was presented to the public as a theatrical event, with reserved seating and printed programs, and audience members often dressed in their best attire for the evening.

The Cinerama projection screen, rather than being a continuous surface like most screens, is made of hundreds of individual vertical strips of standard perforated screen material, each about ​7⁄8 inch (~22 mm) wide, with each strip angled to face the audience, so as to prevent light scattered from one end of the deeply curved screen from reflecting across the screen and washing out the image on the opposite end. The display is accompanied by a high-quality, seven-track discrete, directional, surround-sound system.

The original system involved shooting with three synchronized cameras sharing a single shutter. This process was later abandoned in favor of a system using a single camera and 70mm prints. The latter system lost the 146° field of view of the original three-strip system, and its resolution was markedly lower. Three-strip Cinerama did not use anamorphic lenses, although two of the systems used to produce the 70mm prints (Ultra Panavision 70 and Super Technirama 70) did employ anamorphic. Later, 35mm anamorphic reduction prints were produced for exhibition in theatres with anamorphic CinemaScope-compatible projection lenses.

Cinerama was invented by Fred Waller (1886–1954) and languished in the laboratory for several years before Waller, joined by Hazard "Buzz " Reeves, brought it to the attention of Lowell Thomas who, first with Mike Todd and later Merian C. Cooper, produced a commercially viable demonstration of Cinerama which opened on Broadway on September 30, 1952. The film, titled This is Cinerama, was received with enthusiasm. It was the outgrowth of many years of development. A forerunner was the triple-screen final sequence in the silent Napoléon (1927) directed by Abel Gance; Gance's classic was considered lost in the 1950s, however, known of only by hearsay, and Waller could not have actually seen it. Waller had earlier developed an 11-projector system called "Vitarama" at the Petroleum Industry exhibit in the 1939 New York World's Fair. A five-camera version, the Waller Gunnery Trainer, was used during the Second World War.

The word "Cinerama" combines cinema with panorama, the origin of all the "-orama" neologisms (the word "panorama" comes from the Greek words "pan", meaning all, and "orama", which translates into that which is seen, a sight, or a spectacle). It has been suggested that Cinerama could have been an intentional anagram of the word American; but an online posting by Dick Babish, describing the meeting at which it was named, says that this is "purely accidental, however delightful."

The photographic system used three interlocked 35 mm cameras equipped with 27 mm lenses, approximately the focal length of the human eye. Each camera photographed one-third of the picture shooting in a crisscross pattern, the right camera shooting the left part of the image, the left camera shooting the right part of the image, and the center camera shooting straight ahead. The three cameras were mounted as one unit, set at 48 degrees to each other. A single rotating shutter in front of the three lenses assured simultaneous exposure on each of the films. The three angled cameras photographed an image that was not only three times as wide as a standard film but covered 146 degrees of arc, close to the human field of vision, including peripheral vision. The image was photographed six sprocket holes high, rather than the usual four used in conventional 35 mm processes. The picture was photographed and projected at 26 frames per second rather than the usual 24.

According to film historian Martin Hart, in the original Cinerama system, "the camera aspect ratio 2.59:1" with an "optimum screen image, with no architectural constraints, about 2.65:1, with the extreme top and bottom cropped slightly to hide anomalies". He further comments on the unreliability of "numerous websites and other resources that will tell you that Cinerama had an aspect ratio of up to 3:1."

In theaters, Cinerama film was projected from three projection booths arranged in the same crisscross pattern as the cameras. They projected onto a deeply curved screen, the outer thirds of which were made of over 1100 strips of material mounted on "louvers" like a vertical Venetian blind, to prevent light projected to each end of the screen from reflecting the opposite end and washing out the image. This was a big-ticket, reserved-seats spectacle, and the Cinerama projectors were adjusted carefully and operated skillfully. To prevent adjacent images from creating an over illuminated vertical band where they overlapped on the screen, vibrating combs in the projectors, called "jiggolos," alternately blocked the image from one projector and then the other; the overlapping area thus received no more total illumination than the rest of the screen, and the rapidly alternating images within the overlap smoothed out the visual transition between adjacent image "panels." Great care was taken to match color and brightness when producing the prints. Nevertheless, the seams between panels were usually noticeable. Optical limitations with the design of the camera itself meant that if distant scenes joined perfectly, closer objects did not (parallax error). A nearby object might split into two as it crossed the seams. To avoid calling attention to the seams, scenes were often composed of unimportant objects such as trees or posts at the seams, and action was blocked so as to center actors within panels. This gave a distinctly "triptych-like" appearance to the composition even when the seams themselves were not obvious. It was often necessary to have actors in different sections "cheat" where they looked in order to appear to be looking at each other in the final projected picture. Enthusiasts say the seams were not obtrusive; detractors disagree. Lowell Thomas, an investor in the company with Mike Todd, was still raving about the process in his memoirs thirty years later.

In addition to the visual impact of the image, Cinerama was one of the first processes to use a multitrack magnetic sound. The system, developed by Hazard E. Reeves, one of the Cinerama investors, played back from a full coated 35 mm magnetic film with seven tracks of sound targeting a speaker layout similar to the more modern SDDS. There were five speakers behind the screen, two on the side and back of the auditorium with a sound engineer directing the sound between the surround speakers according to a script. The projectors and sound systems were synchronized by a system using selsyn motors. 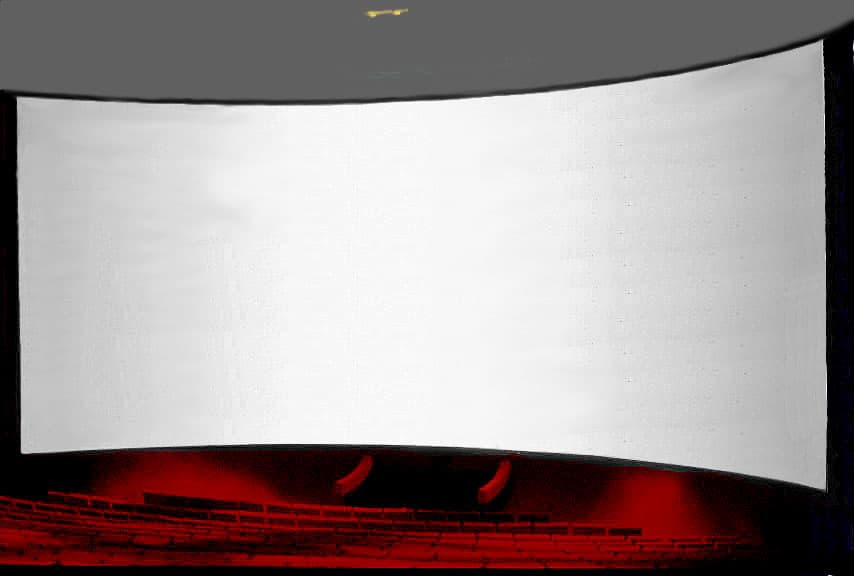 Cinerama
see also
resources
source
Adapted from content published on wikipedia.org
credit
Last modified on May 6, 2021, 8:33 am
previous
next
Videocide.com is a service provided by Codecide, a company located in Chicago, IL USA.