Clamping circuit
An electronic circuit that resolves the positive or negative extreme values of a signal to a defined value, keeping the whole signal at a stable DC level.

A clamper is an electronic circuit that resolves the positive or negative extreme values of a signal to a defined value, keeping the whole signal at a stable DC level. It does not restrict peak-to-peak levels and does not dangerously overcompensate the signal, which can cause clipping.

A diode clamp (a simple, common type) consists of a diode, which conducts electric current in only one direction and prevents the signal from exceeding the reference value; and a capacitor, which provides a DC offset from the stored charge. The capacitor forms a time constant with the resistor load, which determines the range of frequencies over which the clamper will be effective.

A clamping circuit (also known as a clamper) will bind the upper or lower extreme of a waveform to a fixed DC voltage level. These circuits are also known as DC voltage restorers. Clampers can be constructed in both positive and negative polarities. When unbiased, clamping circuits will fix the voltage lower limit (or upper limit, in the case of negative clampers) to 0 volts. These circuits clamp a peak of a waveform to a specific DC level compared with a capacitively-coupled signal, which swings about its average DC level.

The clamping network is one that will "clamp" a signal to a different dc level. The network must have a capacitor, a diode, and a resistive element, but it can also employ an independent dc supply to introduce an additional shift. The magnitude of R and C must be chosen such that the time constant RC is large enough to ensure that the voltage across the capacitor does not discharge significantly during the interval the diode is nonconducting. 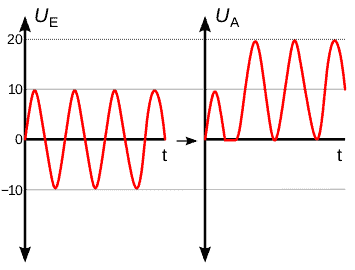 Clamper
also known as
see also
resources
source
Adapted from content published on wikipedia.org
credit
Last modified on May 10, 2021, 12:45 pm
previous
next
Videocide.com is a service provided by Codecide, a company located in Chicago, IL USA.