The abrupt interruption of a digital stream that occurs when the receiver can no longer process the incoming signal due to quality or strength issues.

A cliff effect is the abrupt interruption of a digital stream that occurs when the receiver can no longer process the incoming signal due to quality or strength issues. While analog signals gradually fade when signal strength decreases or electromagnetic interference or multipath increases, digital signals provide data and streams that are either perfect or non-existent at the receiving end.

It is named cliff effect after a graph of reception quality versus signal quality, where the digital signal "falls off a cliff" instead of having a gradual roll-off.

The phenomenon is primarily seen in broadcasting, where signal strength is liable to vary, rather than in recorded media, which generally have a good signal. However, it may be seen in significantly damaged media, which is at the edge of readability.

The term is also used in economics for an unrelated phenomenon.

This effect can most easily be seen on digital television, including both satellite TV and over-the-air terrestrial TV. While forward error correction is applied to the broadcast when a minimum threshold of signal quality (a maximum bit error rate) is reached it is no longer enough for the decoder to recover. The picture may break up (macro blocking), lock on a freeze frame, or go blank. Causes include rain fade or solar transit on satellites, and temperature inversions and other weather or atmospheric conditions causing anomalous propagation on the ground.

Three particular issues manifest the cliff effect. Firstly, anomalous conditions will cause occasional signal degradation. Secondly, if one is located in a fringe area, where the antenna is just barely strong enough to receive the signal, then usual variation in signal quality will cause relatively frequent signal degradation, and a very small change in overall signal quality can have a dramatic impact on the frequency of signal degradation – one incident per hour (not significantly affecting watchability) versus problems every few seconds or continuous problems. Thirdly, in some cases, where the signal is beyond the cliff (in the unwatchable territory), viewers who were once able to receive a degraded signal from analog stations will find after the digital transition that there is no available signal in rural, fringe or mountainous regions.

The cliff effect is a particularly serious issue for mobile TV, as signal quality may vary significantly, particularly if the receiver is moving rapidly, as in a car.

Hierarchical modulation and coding can provide a compromise by supporting two or more streams with different robustness parameters and allowing receivers to scale back to a lower definition (usually from HDTV to SDTV, or possibly from SDTV to LDTV) before dropping out completely. Two-level hierarchical modulation is supported in principle by the European DVB-T digital terrestrial television standard. However, layered source coding, such as provided by Scalable Video Coding, is not supported. 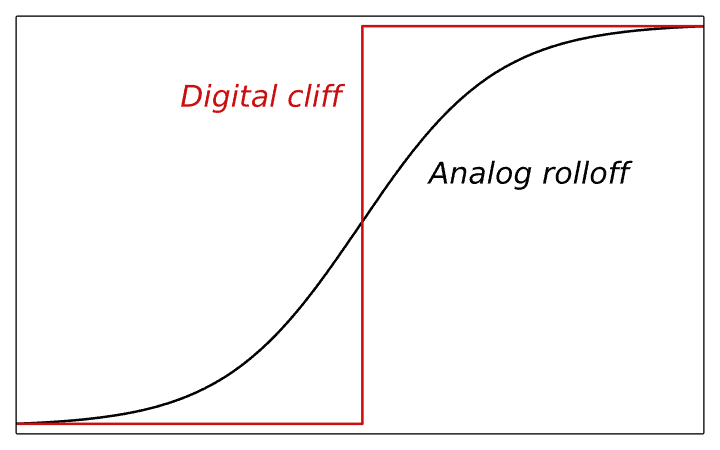