A coaxial cable is a common type of electrical cable. It's used primarily to transmit data, video, and voice. It consists of an inner conductor surrounded by multiple layers of insulation material. Many cables have a further outer sheath (also called a jacket) as well. The coaxial feature comes from the shared axis between the inner conductor and its outer sheath/jacket.

Coaxial cable was invented by English engineer and mathematician Oliver Heaviside, who patented the design in 1880.

Coaxial cable is a type of transmission line, used to carry high-frequency electrical signals with low losses. It is used in such applications as telephone trunk lines, broadband internet networking cables, high-speed computer data busses, carrying cable television signals, and connecting radio transmitters and receivers to their antennas. It differs from other shielded cables because the dimensions of the cable and connectors are controlled to give a precise, constant conductor spacing, which is needed for it to function efficiently as a transmission line.

Coaxial cable is used as a transmission line for radio frequency signals. Its applications include feedlines connecting radio transmitters and receivers to their antennas, computer network (e.g., Ethernet) connections, digital audio (S/PDIF), and distribution of cable television signals. One advantage of coaxial over other types of radio transmission lines is that in an ideal coaxial cable the electromagnetic field carrying the signal exists only in the space between the inner and outer conductors. This allows coaxial cable runs to be installed next to metal objects such as gutters without the power losses that occur in other types of transmission lines. Coaxial cable also provides protection of the signal from external electromagnetic interference. 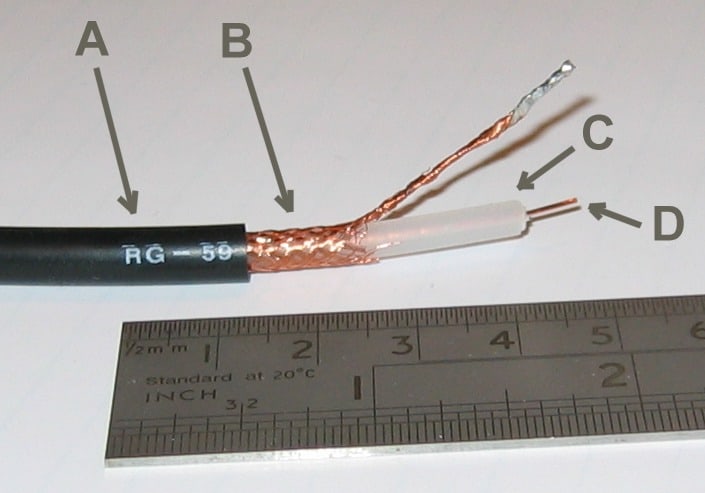