The process of aligning all the optical elements of an instrument or device on their designed axis.

The word collimation is typically used in reference to astronomical or medical equipment. With regards to a telescope, the term refers to the fact that the optical axis of each optical component should be centered and parallel so that collimated light emerges from the eyepiece. Most amateur reflector telescopes need to be re-collimated every few years to maintain optimum performance. This can be done by simple visual methods such as looking down the optical assembly with no eyepiece to make sure the components are lined up, by using a Cheshire eyepiece, or with the assistance of a simple laser collimator or autocollimator. Collimation can also be tested using a shearing interferometer, which is often used to test laser collimation.

"Decollimation" is any mechanism or process which causes a beam with the minimum possible ray divergence to diverge or converge from parallelism. Decollimation may be deliberate for systems reasons or may be caused by many factors, such as refractive index inhomogeneities, occlusions, scattering, deflection, diffraction, reflection, and refraction. Decollimation must be accounted for to fully treat many systems such as radio, radar, sonar, and optical communications. 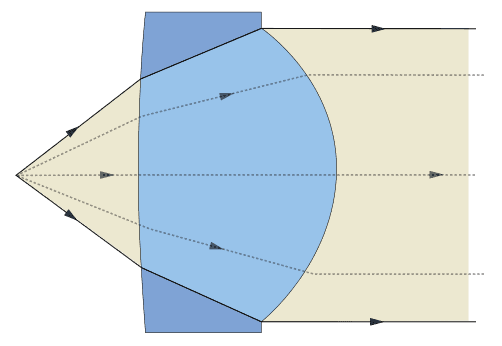 Collimation
see also
resources
source
Adapted from content published on wikipedia.org
credit
Last modified on May 24, 2021, 3:07 pm
previous
next
Videocide.com is a service provided by Codecide, a company located in Chicago, IL USA.