A color gel is a transparent colored material that used to color light and for color correction. Modern gels are thin sheets of polycarbonate, polyester, or other heat-resistant plastics, placed in front of a lighting fixture in the path of the beam.

Gels have a limited life, especially in saturated colors (lower light transmission) and shorter wavelengths (blues). The color will fade or even melt, depending upon the energy absorption of the color, and the sheet will have to be replaced. In permanent installations and some theatrical uses, colored glass filters or dichroic filters are used. The main drawbacks are an additional expense and a more limited selection. In Shakespearean-era theater, red wine was used in a glass container as a light filter. In later days, colored water or silk was used to filter light in the theater. Later, a gelatin base became the material of choice. Gelatin gel was available at least until 1979. The name gel has continued to be used to the present day. Gelatin-based color media had no melting point, and the color was cast in the media as opposed to being coated on the surface, both important properties for color media. It would, however, char at high temperatures and become brittle once heated, so it was impossible to handle once used in the lighting instrument.

By 1945 more heat-tolerant and self-extinguishing acetate-based through-dyed materials were being manufactured (marketed as Chromoid then Cinemoid by Strand Electric). In the U.S., Roscolene (acetate) was also developed to deal with these higher output light sources. Though cheaper, the acetate filters fell out of favor with professional organizations since they could not withstand the higher temperatures produced by the tungsten-halogen lamps that came into widespread use in the late 1960s. The acetate-based material was replaced by polycarbonates like Roscolar (mylar polycarbonate) and polyester-based filters. These materials have superior heat tolerance when compared to acetate-based gels. Many were transparent film with a surface coating. The first dyed polyester gels were introduced by Berkey Colortran in 1969 as Gelatran, the original deep-dyed polyester. The Gelatran process is still used today to produce GAMColor (100% of the line) and Roscolux (about 30% of the line). Other color manufacturers, such as Lee Filters and Apollo Design Technology, use a surface applied dye. (Roscolux is 70% polycarbonate and 30% deep-dyed polyester.)

Almost every color manufacturer today uses either polycarbonate or polyester to manufacture their gels. Even today's gels can burn out (to lighten in color starting in the center) easily, rendering them useless. To help combat this, high-temperature materials – polyester having the highest melting point of 480 °F (249 °C) – can be used to help prolong the life in high-heat output lighting instruments. As instrument design improves, it has become a selling point on many lights to have as little heat radiating from the front of the fixture as possible to help prevent burn-through, and help keep the stage and actors cooler during performances.

In the 1930s, Strand Electric of London provided the first numbering system for their swatches and with their agents in New York and Sydney, the numbering system went round the world. Remnants of this original filter color system exist in the color swatches of today (such as Deep Amber = No. 3; Primary Red = No. 6; Middle Rose = No 10; Peacock Blue = No 15; Primary Blue = No 20; Primary Green = No 39). In the theater, gels are typically available in single 20 in × 24 in (500 mm × 600 mm) sheets, which are then cut down to the appropriate size before use. The size originates from the gelatin days: it is the same as a standard baker's sheet, which was used to cast the sheets. In the film industry, gels are usually cut straight from rolls 24 or 48 in (600 or 1,200 mm) wide and 50 ft (15 m) long, as the size required may vary from a single practical halogen spotlight in a ceiling to a whole window, so a standard-sized sheet would be impractical. 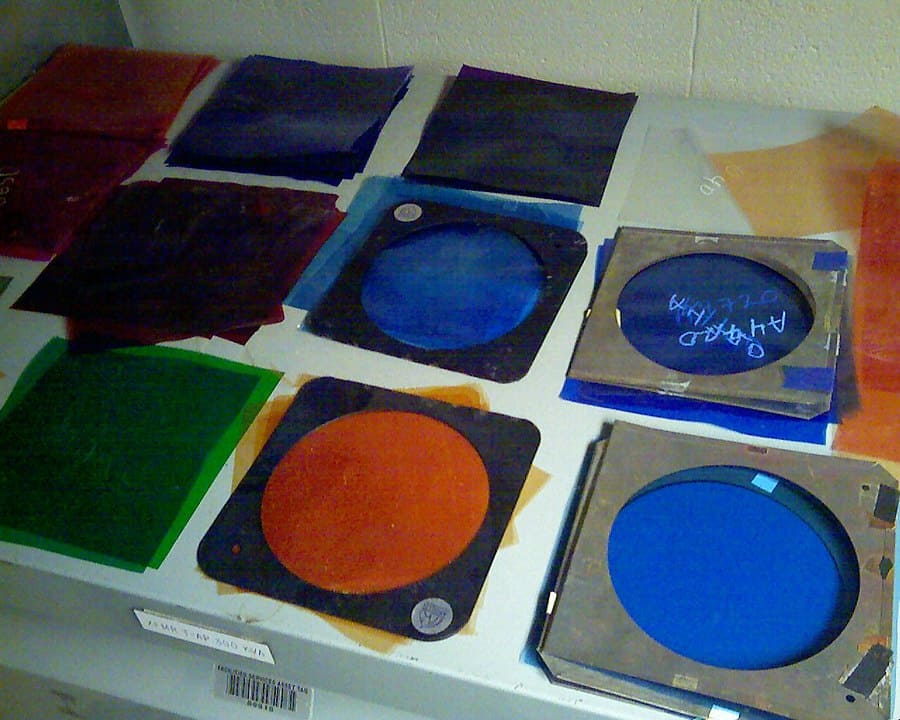