The saturation of a color; a measurement of how close a color is to gray.

The saturation of a color; a measurement of how close a color is to gray.

Electromagnetic radiation is characterized by its wavelength (or frequency) and its intensity. When the wavelength is within the visible spectrum (the range of wavelengths humans can perceive, approximately from 390 nm to 700 nm), it is known as "visible light".

Most light sources emit light at many different wavelengths; a source's spectrum is a distribution giving its intensity at each wavelength. Although the spectrum of light arriving at the eye from a given direction determines the color sensation in that direction, there are many more possible spectral combinations than color sensations. In fact, one may formally define a color as a class of spectra that give rise to the same color sensation, although such classes would vary widely among different species, and to a lesser extent among individuals within the same species. In each such class the members are called metamers of the color in question. This effect can be visualized by comparing the light sources' spectral power distributions and the resulting colors.
Spectral colors

The familiar colors of the rainbow in the spectrum—named using the Latin word for appearance or apparition by Isaac Newton in 1671—include all those colors that can be produced by visible light of a single wavelength only, the pure spectral or monochromatic colors. The table at right shows approximate frequencies (in terahertz) and wavelengths (in nanometers) for various pure spectral colors. The wavelengths listed are as measured in air or vacuum (see refractive index).

The color table should not be interpreted as a definitive list—the pure spectral colors form a continuous spectrum, and how it is divided into distinct colors linguistically is a matter of culture and historical contingency (although people everywhere have been shown to perceive colors in the same way). A common list identifies six main bands: red, orange, yellow, green, blue, and violet. Newton's conception included a seventh color, indigo, between blue and violet. It is possible that what Newton referred to as blue is nearer to what today is known as cyan, and that indigo was simply the dark blue of the indigo dye that was being imported at the time.

The intensity of a spectral color, relative to the context in which it is viewed, may alter its perception considerably; for example, a low-intensity orange-yellow is brown, and a low-intensity yellow-green is olive green.

The color of an object depends on both the physics of the object in its environment and the characteristics of the perceiving eye and brain. Physically, objects can be said to have the color of the light leaving their surfaces, which normally depends on the spectrum of the incident illumination and the reflectance properties of the surface, as well as potentially on the angles of illumination and viewing. Some objects not only reflect light but also transmit light or emit light themselves, which also contributes to the color. A viewer's perception of the object's color depends not only on the spectrum of the light leaving its surface but also on a host of contextual cues, so that color differences between objects can be discerned mostly independent of the lighting spectrum, viewing angle, etc. This effect is known as color constancy.
The upper disk and the lower disk have exactly the same objective color, and are in identical gray surroundings; based on context differences, humans perceive the squares as having different reflectances, and may interpret the colors as different color categories; see checker shadow illusion.

Some generalizations of the physics can be drawn, neglecting perceptual effects for now:

To summarize, the color of an object is a complex result of its surface properties, its transmission properties, and its emission properties, all of which contribute to the mix of wavelengths in the light leaving the surface of the object. The perceived color is then further conditioned by the nature of the ambient illumination, and by the color properties of other objects nearby, and via other characteristics of the perceiving eye and brain. 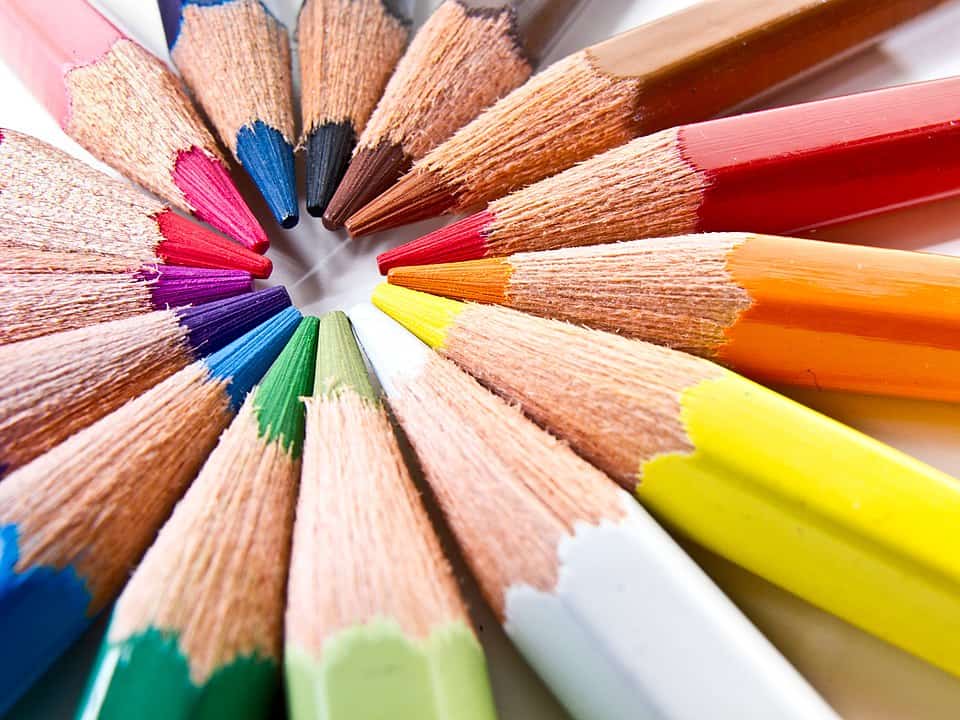