A method of representing colors as points within a triangle used in colorimetry.

In colorimetry, the color triangle is a method of representing colors as points within a triangle. It can be used to calculate and specify the number of aspects of colorimetry. The three corners of the triangle represent three color stimuli of red, green, and blue (RGB) lights, and any color that can be produced by mixing these three stimuli in different proportions can be represented by a point within the triangle. The point at which a mixture of the three primary colors produces white light is called the white point. This point is the same for all wavelengths of light, so it is not affected by the color of illumination used.

An additive color space defined by three primary colors has a chromaticity gamut that is a color triangle when the amounts of the primaries are constrained to be nonnegative.

Before the theory of additive color was proposed by Thomas Young and further developed by James Clerk Maxwell and Hermann von Helmholtz, triangles were also used to organize colors, for example around a system of red, yellow, and blue primary colors.

After the development of the CIE system, color triangles were used as chromaticity diagrams, including briefly with the trilinear coordinates representing the chromaticity values. Since the sum of the three chromaticity values has a fixed value, it suffices to depict only two of the three values, using Cartesian coordinates. In the modern x,y diagram, the large triangle bounded by the imaginary primaries X, Y, and Z has corners (1,0), (0,1), and (0,0), respectively; color triangles with real primaries are often shown within this space. 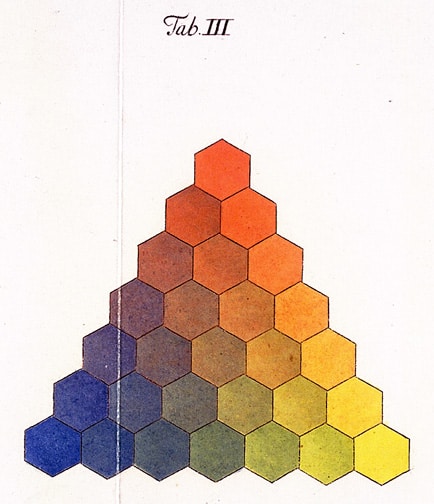