An optical aberration in an optical system where the object appears to have a comet-like tail.

In an optical system (especially telescopes), a coma refers to an aberration that results in off-axis point sources such as stars appearing distorted, appearing to have a tail (coma) like a comet. This aberration is either inherent to certain optical designs or due to imperfection in the lens or other components. Specifically, a coma is defined as a variation in magnification over the entrance pupil. In refractive or diffractive optical systems, especially those imaging a wide spectral range, coma can be a function of wavelength, in which case it is a form of chromatic aberration.

Coma is an inherent property of telescopes using parabolic mirrors. Unlike a spherical mirror, a bundle of parallel rays parallel to the optical axis will be perfectly focused to a point (the mirror is free of spherical aberration), no matter where they strike the mirror. However, this is only true if the rays are parallel to the axis of the parabola. When the incoming rays strike the mirror at an angle, individual rays are not reflected at the same point. When looking at a point that is not perfectly aligned with the optical axis, some of the incoming light from that point will strike the mirror at an angle. This causes an image that is not in the center of the field to appear wedge-shaped. The further off-axis (or the greater the angle subtended by the point with the optical axis), the worse this effect is. This causes stars to appear to have a cometary coma, hence the name.

Schemes to reduce spherical aberration without introducing coma include Schmidt, Maksutov, ACF, and Ritchey–Chrétien optical systems. Correction lenses, "coma correctors" for Newtonian reflectors have been designed which reduce coma in telescopes below f/6. These work by means of a dual-lens system of a plano-convex and a plano-concave lens fitted into an eyepiece adaptor which superficially resembles a Barlow lens.

Coma of a single lens or a system of lenses can be minimized (and in some cases eliminated) by choosing the curvature of the lens surfaces to match the application. Lenses in which both spherical aberration and coma are minimized at a single wavelength are called bestform or aplanatic lenses. 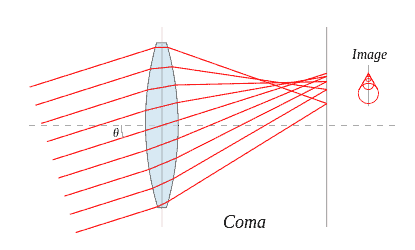