Compact Disc Digital Audio is the format standard for audio compact discs. The standard is defined in the Red Book, one of a series of "Rainbow Books" (named for their binding colors) that contain the technical specifications for all CD formats.

The Red Book specifies the physical parameters and properties of the CD, the optical "stylus" parameters, deviations and error rate, modulation system (eight-to-fourteen modulation, EFM), and error correction facility (cross-interleaved Reed–Solomon coding, CIRC), and the eight subcode channels. These parameters are common to all compact discs and used by all logical formats, such as CD-ROM. The standard also specifies the form of digital audio encoding: 2-channel signed 16-bit Linear PCM sampled at 44,100 Hz. Although rarely used, the specification allows for discs to be mastered with a form of emphasis.

The first edition of the Red Book was released in 1980 by Philips and Sony; it was adopted by the Digital Audio Disc Committee and ratified by the International Electrotechnical Commission Technical Committee 100, as an International Standard in 1987 with the reference IEC 60908. The second edition of IEC 60908 was published in 1999 and it cancels and replaces the first edition, amendment 1 (1992), and the corrigendum to amendment 1. The IEC 60908, however, does not contain all the information for extensions that is available in the Red Book, such as the details for CD-Text, CD+G, and CD+EG.

The standard is not freely available and must be licensed. It is available from Philips and the IEC. As of 2013, Philips outsources licensing of the standard to Adminius, which charges US$100 for the Red Book, plus US$50 each for the Subcode Channels R-W and CD-Text Mode annexes.

The audio contained in a CD-DA consists of two-channel signed 16-bit LPCM sampled at 44,100 Hz.

The sampling rate is adapted from that attained when recording digital audio on videotape with a PCM adaptor, an earlier way of storing digital audio. An audio CD can represent frequencies up to 22.05 kHz, the Nyquist frequency of the 44.1 kHz sample rate.

There was a long debate over the use of 16-bit (Sony) or 14-bit (Philips) quantization, and 44,056 or 44,100 samples/s (Sony) or approximately 44,000 samples/s (Philips). When the Sony/Philips task force designed the Compact Disc, Philips had already developed a 14-bit D/A converter (DAC), but Sony insisted on 16-bit. In the end, Sony won, so 16 bits and 44.1 kilosamples per second prevailed. Philips found a way to produce 16-bit quality using its 14-bit DAC by using four times oversampling.

Some CDs are mastered with pre-emphasis, an artificial boost of high audio frequencies. The pre-emphasis improves the apparent signal-to-noise ratio by making better use of the channel's dynamic range. On playback, the player applies a de-emphasis filter to restore the frequency response curve to an overall flat one. Pre-emphasis time constants are 50µs and 15µs (9.49 dB boost at 20 kHz), and a binary flag in the disc subcode instructs the player to apply de-emphasis filtering if appropriate. Playback of such discs in a computer or 'ripping' to wave files typically does not take into account the pre-emphasis, so such files play back with distorted frequency response.

The creators of the CD originally aimed at a playing time of 60 minutes with a disc diameter of 100 mm (Sony) or 115 mm (Philips). Sony vice-president Norio Ohga suggested extending the capacity to 74 minutes to accommodate the recording of Wilhelm Furtwängler conducting Ludwig van Beethoven's Ninth Symphony at the 1951 Bayreuth Festival. The additional 14-minute playing time subsequently required changing to a 120 mm disc. Kees Schouhamer Immink, Philips' chief engineer, however, denies this, claiming that the increase was motivated by technical considerations and that even after the increase in size, the Furtwängler recording would not have fit onto one of the earliest CDs.

According to a Sunday Tribune interview, the story is slightly more involved. In 1979, Philips owned PolyGram, one of the world's largest distributors of music. PolyGram had set up a large experimental CD plant in Hannover, Germany, which could produce huge numbers of CDs having a diameter of 115 mm. Sony did not yet have such a facility. If Sony had agreed on the 115-mm disc, Philips would have had a significant competitive edge in the market. The long-playing time of Beethoven's Ninth Symphony imposed by Ohga was used to push Philips to accept 120 mm so that Philips' PolyGram lost its edge on disc fabrication.

The 74-minute playing time of a CD, which is longer than the 22 minutes per side typical of long-playing (LP) vinyl albums, was often used to the CD's advantage during the early years when CDs and LPs vied for commercial sales. CDs would often be released with one or more bonus tracks, enticing consumers to buy the CD for the extra material. However, attempts to combine double LPs onto one CD occasionally resulted in the opposite situation in which the CD would instead offer less audio than the LP. One such example was with DJ Jazzy Jeff & The Fresh Prince's double-album He's the DJ, I'm the Rapper, in which initial CD releases of the album had multiple tracks edited down for length in order to fit on a single disc; recent CD reissues package the album across two discs as a result. The emergence of 80-minute CDs allowed for some double albums that were previously edited for length or packaged as double-CDs to be re-released on a single disc, such as 1999 by Prince in the case of the former and Tommy by the Who in the case of the latter.

Playing times beyond 74 minutes are achieved by decreasing track pitch (the distance separating the track as it spirals the disc) in violation of strict Red Book standards. However, most players can still accommodate the more closely spaced data if it is still within Red Book tolerances. Current manufacturing processes allow an audio CD to contain up to 80 minutes (variable from one replication plant to another) without requiring the content creator to sign a waiver releasing the plant owner from responsibility if the CD produced is marginally or entirely unreadable by some playback equipment. In current practice, maximum CD playing time has crept higher by reducing minimum engineering tolerances. 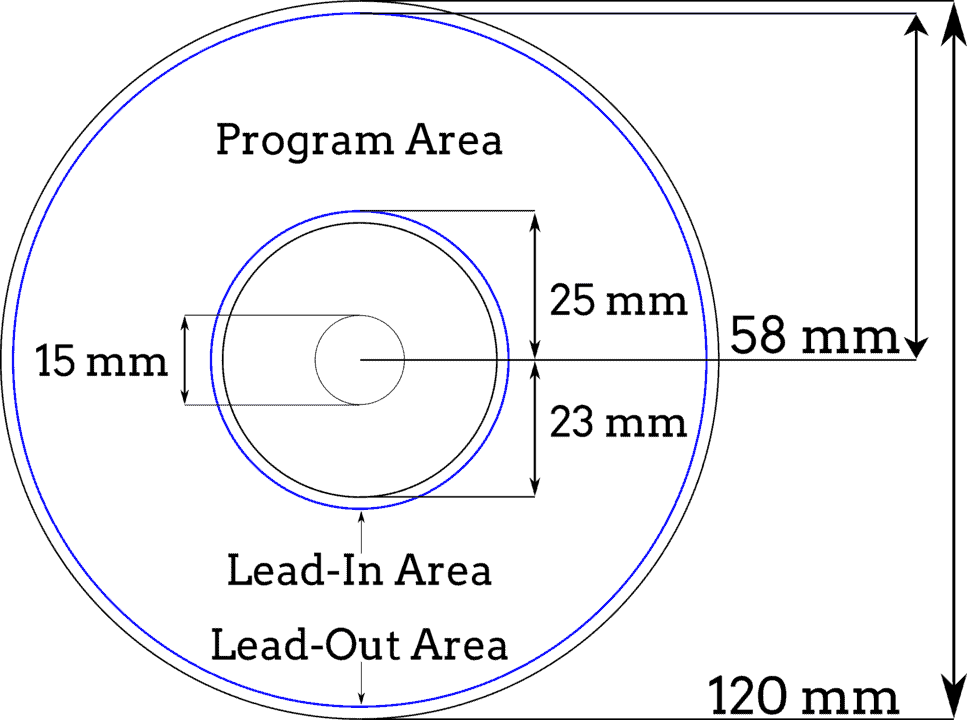