Opposite colors
Pairs of colors that cancel each other and produce a grayscale color when combined or mixed.

Complementary colors are pairs of colors that cancel each other when combined or mixed. Such combinations result in a loss of hue; a grayscale color like white or black. When placed next to each other, they create the strongest contrast for those two colors.

Which pairs of colors are considered complementary depends on the color theory one uses:

The traditional color wheel model dates to the 18th century and is still used by many artists today. This model designates red, yellow, and blue as primary colors with the primary-secondary complementary pairs of red-green, blue-orange, and yellow–purple.

In this traditional scheme, a complementary color pair contains one primary color (yellow, blue or red) and a secondary color (green, purple, or orange). The complement of any primary color can be made by combining the two other primary colors. For example, to achieve the complement of yellow (a primary color) one could combine red and blue. The result would be purple, which appears directly across from yellow on the color wheel. Continuing with the color wheel model, one could then combine yellow and purple, which essentially means that all three primary colors would be present at once. Since paints work by absorbing light, having all three primaries together produces a black or gray color (see subtractive color). In more recent painting manuals, the more precise subtractive primary colors are magenta, cyan, and yellow.

Complementary colors can create some striking optical effects. The shadow of an object appears to contain some of the complementary colors of the object. For example, the shadow of a red apple will appear to contain a little blue-green. This effect is often copied by painters who want to create more luminous and realistic shadows. Also, if you stare at a square of color for a long period of time (thirty seconds to a minute), and then look at a white paper or wall, you will briefly see an afterimage of the square in its complementary color.

The RGB color model, invented in the 19th century and fully developed in the 20th century, uses combinations of red, green, and blue light against a black background to make the colors seen on a computer monitor or television screen. In the RGB model, the primary colors are red, green, and blue. The complementary primary–secondary combinations are red-cyan, green–magenta, and blue-yellow. In the RGB color model, the light of two complementary colors, such as red and cyan, combined at full intensity, will make white light, since two complementary colors contain light with the full range of the spectrum. If the light is not fully intense, the resulting light will be gray.

In some other color models, such as the HSV color space, the neutral colors (white, grays, and black) lie along a central axis. Complementary colors (as defined in HSV) lie opposite each other on any horizontal cross-section. For example, in the CIE 1931 color space, a color of a "dominant" wavelength can be mixed with an amount of the complementary wavelength to produce a neutral color (gray or white).

In the CMYK color model, the primary colors magenta, cyan, and yellow together make black, and the complementary pairs are magenta–green, yellow–blue, and cyan–red.

Color printing, like painting, also uses subtractive colors, but the complementary colors are different from those used in painting. As a result, the same logic applies to colors produced by light. Color printing uses the CMYK color model, making colors by overprinting cyan, magenta, yellow, and black ink. In printing the most common complementary colors are magenta–green, yellow–blue, and cyan–red. In terms of complementary/opposite colors, this model gives exactly the same result as using the RGB model. Black is added when needed to make the colors darker.

The use of complementary colors is an important aspect of aesthetically pleasing art and graphic design. This also extends to other fields such as contrasting colors in logos and retail display. When placed next to each other, complements make each other appear brighter.

Complementary colors also have more practical uses. Because orange and blue are complementary colors, life rafts and life vests are traditionally orange, to provide the highest contrast and visibility when seen from ships or aircraft over the ocean.

Red and cyan glasses are used in the Anaglyph 3D system to produce 3D images on computer screens. 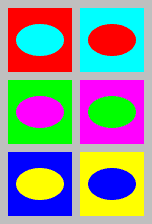