The arrangement of visual elements in a frame, as distinct from the subject.

In the visual arts, the term composition refers to the placement or arrangement of visual elements as distinct from the subject. It is the organization of the elements according to the principles of art.

The composition of a picture is different from its subject, what is depicted, whether a moment from a story, a person, or a place. Many subjects, for example, Saint George and the Dragon, are often portrayed in art, but using a great range of compositions even though the two figures are typically the only ones shown.

The term composition means 'putting together' and can apply to any work of art, from music to writing to photography, that is arranged using conscious thought. In the visual arts, the composition is often used interchangeably with various terms such as design, form, visual ordering, or formal structure, depending on the context. In graphic design for press and desktop publishing, the composition is commonly referred to as page layout.

Lines are optical phenomena that allow the artist to direct the eye of the viewer. The optical illusion of lines does exist in nature and visual arts elements can be arranged to create this illusion. The viewer unconsciously reads near a continuous arrangement of different elements and subjects at varying distances. Such elements can be of dramatic use in the composition of the image. These could be literal lines such as telephone and power cables or rigging on boats. Lines can derive also from the borders of areas of differing color or contrast, or sequences of discrete elements. Movement is also a source of lines, where the blurred movement renders as a line.

Subject lines contribute to both mood and linear perspective, giving the viewer the illusion of depth. Oblique lines convey a sense of movement and angular lines generally convey a sense of dynamism and possibly tension. Lines can also direct attention towards the main subject of the picture, or contribute to the organization by dividing it into compartments. The artist may exaggerate or create lines perhaps as part of their message to the viewer. Many lines without a clear subject point suggest chaos in the image and may conflict with the mood the artist is trying to evoke.

Straight left lines create different moods and add affection to visual arts. A line's angle and its relationship to the size of the frame influence the mood of the image. Horizontal lines, commonly found in landscape photography, can give the impression of calm, tranquility, and space. An image filled with strong vertical lines tends to have the impression of height and grandeur. Tightly angled convergent lines give a dynamic, lively, and active effect to the image. Strongly angled, almost diagonal lines produce tension in the image. The viewpoint of visual art is very important because every different perspective views different angled lines. This change of perspective elicits a different response to the image. By changing the perspective only by some degrees or some centimeters lines in images can change tremendously and a totally different feeling can be transported. Straight lines are also strongly influenced by tone, color, and repetition in relation to the rest of the image.

Compared to straight lines, curves provide a greater dynamic influence in a picture. They are also generally more aesthetically pleasing, as the viewer associates them with softness. In photography, curved lines can give graduated shadows when paired with soft-directional lighting, which usually results in a very harmonious line structure within the image.

There are three properties of color. Hue, brightness or chroma, and value. Hue is simply the name of a color, (red, yellow, and blue, etc.) Brightness and chroma refer to the intensity and strength of the color. A high chroma color is purer and less greyed than a low chroma color. The lightness and darkness to a color is the value. Color also has the ability to work within our emotions. Given that, we can use color to create a mood. It can also be used as tone, pattern, light, movement, symbol, form, harmony, and contrast.

Texture refers to how an object feels or how it looks like it may feel if it were touched. There are two ways we experience texture, physically and optically. Different techniques can be used to create physical texture, which allows qualities of visual art to be seen and felt. This can include surfaces such as metal, sand, and wood. The optical texture is when the illusion of physical texture is created. Photography, paintings, and drawings use visual texture to create a more realistic appearance.

Lightness and darkness are known as the value in visual art. Value deals with how light reflects off objects and how we see it. The more light that is reflected, the higher the value. White is the highest or lightest value while black is the lowest or darkest value. Colors also have value, for example, yellow has a high value while blue and red have a low value. If you take a black and white picture of a colorful scene, all you are left with are the values. This important element of design, especially in painting and drawing, allows the artist to create the illusion of light through value contrast.

The term form can mean different things in visual art. Form suggests a three-dimensional object in space. It is also described as the physical nature of the artwork, such as sculptures. It can also be looked at as art form, which can be expressed through fine art. A form encloses volume, has length, width, and height, unlike a shape, which is only two-dimensional. Forms that are mathematical, a sphere, pyramid, cube, cylinder, and cone, are known as geometric forms. Organic forms are typically irregular and asymmetrical. This form can be found in nature, such as flowers, rocks, trees, etc., but can also be seen in architecture.

Space is the area around, above, and within an object. Photographers can capture space, architects build space, and painters create space. This element is found in each of the visual arts. It can be positive or negative, open or closed, shallow or deep, and two-dimensional or three-dimensional. In drawing or painting, space is not actually there, but the illusion of it is. Positive space is the subject of the piece. The empty spaces around, above, and within, is negative space. 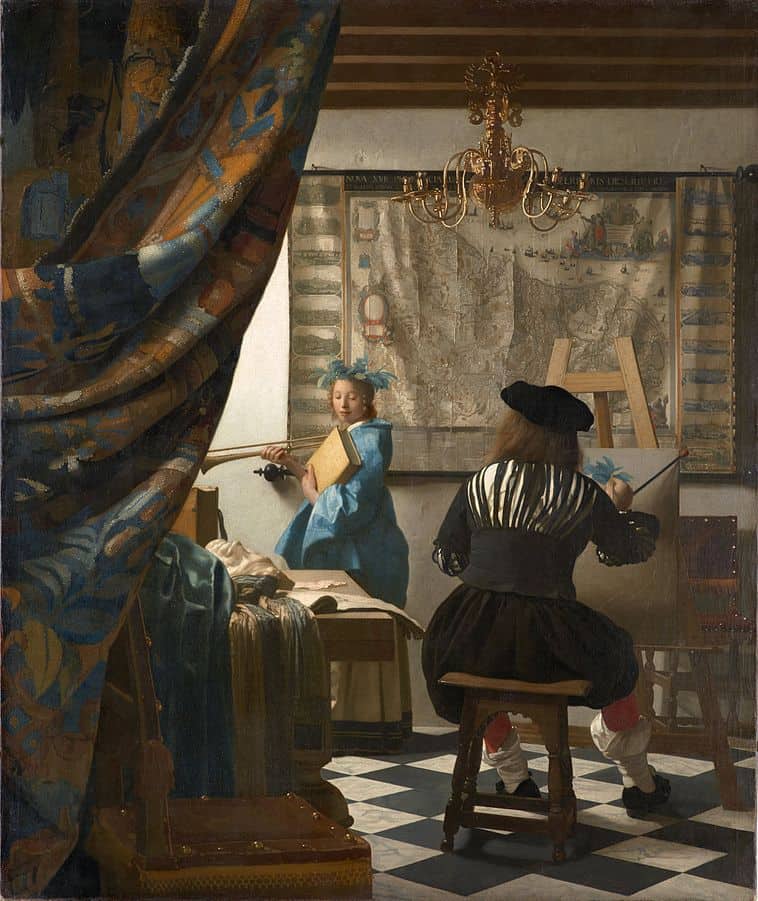 Composition
see also
resources
source
Adapted from content published on wikipedia.org
credit
Last modified on June 17, 2021, 9:18 am
previous
next
Videocide.com is a service provided by Codecide, a company located in Chicago, IL USA.