The restriction of television and streaming media content to viewers that meet pre-established criteria.

In digital television and media broadcasting systems, conditional access is a reference to the restriction of content to viewers meeting pre-established criteria, such as subscribers or paying customers.

This is achieved by a combination of scrambling and encryption. The data stream is scrambled with a 48-bit secret key, called the control word. Knowing the value of the control word at a given moment is of relatively little value, as under normal conditions, content providers will change the control word several times per minute. The control word is generated automatically in such a way that successive values are not usually predictable; the DVB specification recommends using a physical process for that.

In order for the receiver to unscramble the data stream, it must be permanently informed about the current value of the control word. In practice, it must be informed slightly in advance, so that no viewing interruption occurs. Encryption is used to protect the control word during transmission to the receiver: the control word is encrypted as an entitlement control message (ECM). The CA subsystem in the receiver will decrypt the control word only when authorized to do so; that authority is sent to the receiver in the form of an entitlement management message (EMM). The EMMs are specific to each subscriber, as identified by the smart card in his receiver, or to groups of subscribers, and are issued much less frequently than ECMs, usually at monthly intervals. This being apparently not sufficient to prevent unauthorized viewing, TPS has lowered this interval down to about 12 minutes. This can be different for every provider, BSkyB uses a term of 6 weeks. When Nagravision 2 was hacked, Digital+ started sending a new EMM every three days to make unauthorized viewing more cumbersome.

The contents of ECMs and EMMs are not standardized and as such, they depend on the conditional access system being used.

The control word can be transmitted through different ECMs at once. This allows the use of several conditional access systems at the same time, a DVB feature called simulcrypt, which saves bandwidth and encourages multiplex operators to cooperate. DVB Simulcrypt is widespread in Europe; some channels, like the CNN International Europe from the Hot Bird satellites, can use 7 different CA systems in parallel.

The decryption cards are read and sometimes updated with specific access rights, either through a conditional-access module (CAM), a PC card-format card reader meeting DVB-CI standards or through a built-in ISO/IEC 7816 card reader, such as that in the Sky Digibox.

Due to the common usage of CA in DVB systems, many tools to aid in or even directly circumvent encryption exists. CAM emulators and multiple-format CAMs exist which can either read several card formats or even directly decrypt a compromised encryption scheme. Most multiple format CAMs and all CAMs that directly decrypt a signal are based on reverse engineering of the CA systems. A large proportion of the systems currently in use for DVB encryption have been opened to full decryption at some point, including Nagravision, Conax, Viaccess, Mediaguard (v1) as well as the first version of VideoGuard.

In Canadian and United States cable systems, the standard for conditional access is provided with CableCARDs whose specification was developed by the cable company consortium CableLabs.

Cable companies in the US are required by the Federal Communications Commission to support CableCARDs; standards now exist for two way communication (M-card) but satellite television has its own standards. Next-generation approaches in the United States eschew such physical cards and employ schemes using downloadable software for conditional access such as DCAS.

The main appeal of such approaches is that the access control may be upgraded dynamically in response to security breaches without requiring expensive exchanges of physical conditional-access modules. Another appeal is that it may be inexpensively incorporated into non-traditional media display devices such as portable media players. 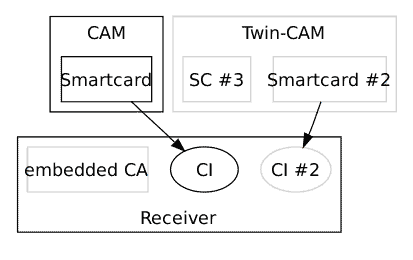