A motion picture film scanner is a device used in digital filmmaking to scan original film for storage as high-resolution digital intermediate files.

Some models of film scanners are intermittent pull-down film scanners that scan each frame individually, locked down in a pin-registered film gate, taking roughly a second per frame. Continuous-scan film scanners, where the film frames are scanned as the film is continuously moved past the imaging pick-up device, are typically evolved from earlier telecine mechanisms and can act as such at lower resolutions.

The scanner scans the film frames into a file sequence (using high-end Computer data storage devices), whose single file contains a digital scan of each still frame; the preferred image file format used as output are usually Cineon, DPX, or TIFF because they can store color information as raw data, preserving the optical characteristics of the film stock. These systems take a lot of storage area network (SAN) disk space. The files can be played back one after the other on high-end workstation non-linear editing systems (NLE) or virtual telecine systems. The playback is at the normal rate of 24 frames per second (or original projection frame rate of 25, 30, or other speeds). Each year hard disks get larger and are able to hold more hours of movies on SAN systems. The challenge is to archive this massive amount of data onto data storage devices. The scanned footage is edited and composited on workstations then mastered back on the film, see the film out, and digital intermediate. Scanned film frames may also be used in digital film restoration. The film may also be projected directly on a digital projector in the theater. The data film files may be converted to SDTV (NTSC or PAL) video TV systems. Film recorders are the opposite of film scanners, copying content from a computer system onto film stock, for preservation or for display using film projectors. Telecines are similar to film scanners. 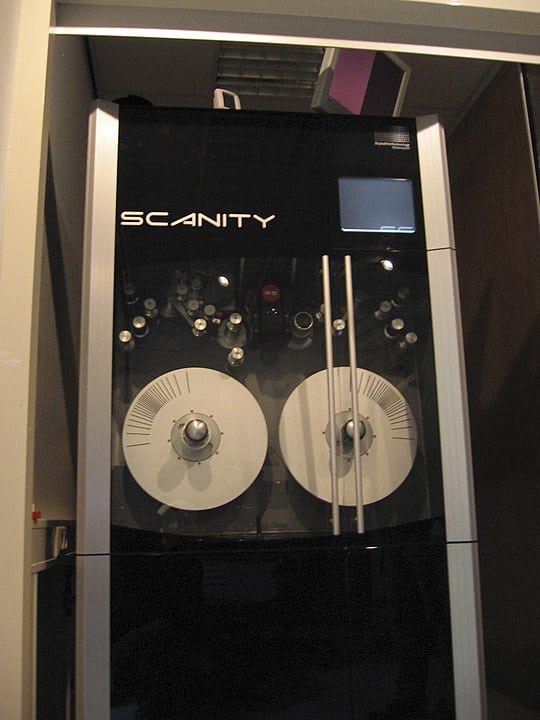