Cross-channel fade
The gradual mix of sound sources through the manipulation of two or more mix console faders simultaneously.

A crossfader on a DJ mixer essentially functions like two faders connected side-by-side, but in opposite directions. A crossfader is typically mounted horizontally, so that the DJ can slide the fader from the extreme left (this provides 100% of sound source A) to the extreme right (this provides 100% of sound source B), move the fader to the middle (this is a 50/50 mix of sources A and B), or adjust the fader to any point in between. It allows a DJ to fade one source out while fading another source in at the same time. This is extremely useful when beatmatching two sources of audio (or more, where channels can be mapped to one of the two sides of the crossfader individually) such as phonograph records, compact discs or digital sources. The technique of cross-fading is also used in audio engineering as a mixing technique, particularly with instrumental solos. A mix engineer will often record two or more takes of a vocal or instrumental part and create a final version which is a composite of the best passages of these takes by cross-fading between each track. In the perfect case, the cross-fade would keep a constant output level, an important quality for a club DJ who is creating a seamless mix of dance tracks for dancers or a radio DJ seeking to avoid "dead air" (silence) between songs, an error that can cause listeners to change channels. However, there is no standard on how this should be achieved.

There are many software applications that feature virtual cross-fades, for instance, burning-software for the recording of audio-CDs. Also many DAW’s (Pro Tools, Logic exc.) have this function. Cross-fade is normally found on samplers and usually based on velocity. The purpose of a cross-fade it to utilize a smooth changeover between two cut pieces of audio. Velocity cross-fading can be incorporated through a MIDI transformation device and where more than one note can be assigned to a given pad (note) on the MIDI keyboard; velocity cross-fading may be available.

Cross-fading usually involves the sounding of a combination of one or two sounds at the same time. While cross-fading one does not want the second part of the fade to start playing before the first part is finished; one wants the overlapping parts to be as short as possible. If edit regions are not trimmed to a zero-crossing point one will get unwelcome pops in the middle. A sound at the lowest velocity can fade into a sound of a higher velocity, in the order of: first the first sound then the second. All possible without fading out the sounds that are already present. This in turn is a form of Layering that can be used in the mix. The same effect (as was created with velocity) can be applied to a controller. This allows continued monitored control; the cross-fading function can also be controlled on some instruments by the keyboard position. These sounds on the MIDI keyboard can be programmed.

A cross-over can either be used between two unrelated pieces of music or between two sounds that are similar; in both of these cases, one would like the sound to be one continuous sound without any bumps. When applying a cross-fade between two very different pieces of music (relating to both tone and pitch), one could simply use a cross-fade between the two pieces, make a few minor adjustments. This is because the two sounds are different from one another. In the case of a cross-fade between two sounds, that are similar, phase-cancellation can become an issue. The two sounds that are cross-faded should be brought into comparison with one another. If both sounds are moving upward they will have a cumulative effect - when added together, this is what one wants. What is not desirable is when both sounds are moving in a different direction, since this can lead to cancelations. This leads to no sound on areas where the amplitudes cancel out one another; there will thus be silence in the middle of the cross-fade. This occurrence is rare though since the parameters have to be the same. Commonly a cross-fade will result in a gradual reduction in the amount of the sample whose pitch is lower, and an increase will be found on the pitch that is higher. The longer a cross-fade, the more likely a problem will occur. One also does not want the effect of the cross-fade to be very prominent in the middle of the notes, since if different notes are between the edit point there will be a time when both of the sounds can be heard simultaneously. This overlapping is not expected from a normal singing voice, no reference to Overtone singing.

Cross-fades can either be applied to a piece of music in real time, or it can be pre-calculated. Grandmaster Flash has been credited with the invention of the first cross-fade by sourcing parts from a junkyard in the Bronx. It was initially an on/off toggle switch from an old microphone that he transformed into a left/right switch which allowed him to switch from one turntable to another, thereby avoiding a break in the music. However the earliest commercial documented example was designed by Richard Wadman, one of the founders of the British company Citronic. It was called the model SMP101, made about 1977, and had a crossfader that doubled as a L/R balance control or a crossfade between two inputs. 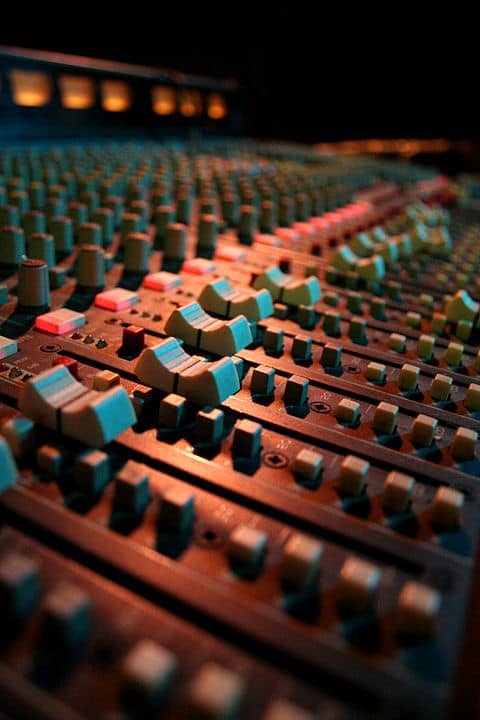