The bleeding of a signal (expressed in dB) from one audio or electrical channel to another.

Crosstalk is the bleeding of a signal (expressed in dB) from one audio or electrical channel to another.

In stereo audio reproduction, crosstalk can refer to signal leaking across from one program channel to another, reducing channel separation and stereo imaging. Crosstalk between channels in mixing consoles, and between studio feeds is a much more noticeable problem, as these are likely to be carrying very different programs or material.

Crosstalk is an electrical effect and can be quantified with a crosstalk measurement. Crosstalk measurements are made on audio systems to determine the amount of signal leaking across from one channel to another. The Independent Broadcasting Authority published a weighting curve for use in crosstalk measurement that gives due emphasis to the subjective audibility of different frequencies. In the absence of any international standards, this is still in use despite the demise of the IBA.

Good crosstalk performance for a stereo system is not difficult to achieve in today's digital audio systems, though it was hard to keep below the desired figure of -30 dB or so on vinyl recordings and FM radio. 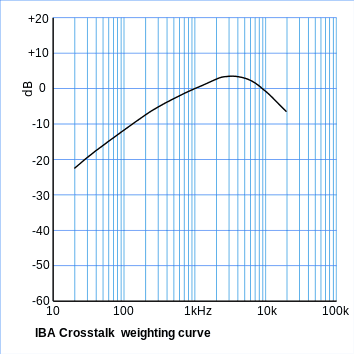