D-1 is an early SMPTE standard format for recording and storing digital video at a resolution 720 × 486 (NTSC). It was introduced in 1986 through efforts by SMPTE engineering committees. It started as a Sony and Bosch - BTS product and was the first major professional digital video format. SMPTE standardized the format within ITU-R 601 (orig. CCIR-601), also known as Rec. 601, which was derived from SMPTE 125M and EBU 3246-E standards.

D-1 or 4:2:2 D-1 (1986) was a major feat in real-time, broadcast-quality digital video recording. It stores uncompressed digitized component video, encoded at Y'CbCr 4:2:2 using the CCIR 601 raster format with 8 bits, along with PCM audio tracks as well as timecode on a 3/4 inch (19 mm) videocassette tape (though not to be confused with the ubiquitous 3/4-inch U-Matic/U-Matic SP cassette).

The uncompressed component video used enormous bandwidth, 173 Mbit/sec (bit rate), for its time. The maximum record time on a D-1 tape is 94 minutes.

Because of the uncompromising picture quality - component processing and uncompressed recording, D-1 was most popular in high-end graphic and animation production - where multiple layering had previously been done in short-run times via hard drives (Quantel Harry, Henry, Harriet, Hal or Abekas DDR) or via multiple analog machines running at once. Hard drives in the 1980s that stored broadcast-quality video would typically only hold 30 seconds to a few minutes of space, yet the systems that made them work could cost $500,000. By contrast, the D-1 machine allowed 94 minutes of recording on a $200 cassette.

A small variation removing the top 6 lines to save space was later introduced and made popular in the 1/4-inch DV/DVCAM/DVCPro formats and for digital broadcasting, which has 720 x 480 pixels for NTSC; and is also used in DVD-Video and Standard-definition television.

Panasonic's D-5 format has similar specifications but sampled at 10-bits as opposed to D-1's 8-bits. It had the advantage of development time as it was introduced much later than Sony's D-1 and two years after Sony's Digital Betacam format was unveiled.

The D-2 format system from Sony and Ampex soon followed two years later, using composite video in order to lower the bandwidth needed. This reduced D-2's price tag to half that of D-1. Since D-2 was composite digital as opposed to a component, it could easily be dropped into the space and infrastructure of composite analog machines presently used at the time (2-inch Quadruplex, 1-inch Type C, and 3/4-inch U-Matic). Since less information was recorded on D-2 than on D-1, tape speed could be reduced and hold a maximum of 208 minutes compared to D-1's 94 minutes. However, D-2 was still a compromise, being a composite video.

Even as HD broadcasting and delivery became more commonplace in the U.S. after 2008-2010, networks would often require standard definition copies on Digital Betacam. Television shows such as CBS' The Rachael Ray Show were still recorded and archived on Digital Betacam as late as 2012.

In the early 2000s, 2-inch Quadruplex and 1-inch Type C reel-to-reel TV programs from 1956 through 1996 were being copied onto Digital Betacam for library vault and re-archiving purposes, especially since spare parts and engineers with the expertise to maintain 2-inch and 1-inch VTRs were diminishing with each passing year.

D-1 was notoriously expensive and the equipment required very large infrastructure changes in facilities which upgraded to this digital recording format because the machines being uncompromising in quality reverted to component processing (where the luminance or black-and-white information of the picture) and its primary colors red, green and blue (RGB) were kept separate in a sampling algorithm known as 4:2:2, which is why many machines have a badge of "4:2:2" instead of "D-1."

Early D-1 operations were plagued with difficulties, though the format quickly stabilized and is still renowned for its superb standard definition image quality.

D-1 was the very first real-time digital broadcast-quality tape format. The original Sony DVR-1000 unveiled in 1986 had a U.S. MSRP (manufacturer suggested retail price) of $160,000. A few years later, Sony's engineers were able to drastically reduce the size of the machine by reducing the electronic processing to fit into the main cassette drive chassis, christened the DVR-2000, lowering the U.S. cost to $120,000.

An external single-rack unit would enable the machine to record an additional key (matte) channel (4:2:2:4) or double the horizontal resolution (8:4:4) by combining two VTRs running simultaneously.

D-1 kept the data recorded as 100% uncompressed, unlike today where compression is required to save space and time for practical delivery to the home, but sacrificing the picture and sound quality in the process. However, purists call the 4:2:2 algorithm a form of compression at the sampling stage - since half the color information is recorded compared to the full luminance/black-and-white picture information. 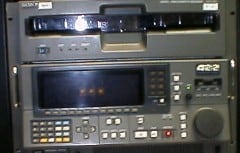 D-1
acronymn
also known as
see also
source
Adapted from content published on wikipedia.org
credit
Last modified on September 21, 2020, 1:35 am
previous
next
Videocide.com is a service provided by Codecide, a company located in Chicago, IL USA.