A circuit or device that converts direct current (DC) from one voltage level to another.

Before the development of power semiconductors and allied technologies, one way to convert the voltage of a DC supply to a higher voltage, for low-power applications, was to convert it to AC by using a vibrator, followed by a step-up transformer and rectifier. For higher power, an electric motor was used to drive a generator of the desired voltage (sometimes combined into a single "dynamotor" unit, a motor and generator combined into one unit, with one winding driving the motor and the other generating the output voltage). These were relatively inefficient and expensive procedures used only when there was no alternative, as to power a car radio (which then used thermionic valves/tubes requiring much higher voltages than available from a 6 or 12 V car battery). The introduction of power semiconductors and integrated circuits made it economically viable to use techniques as described below. For example, to convert the DC power supply to high-frequency AC, use a transformer — small, light, and cheap due to the high frequency — to change the voltage, and rectify back to DC. Although by 1976 transistor car radio receivers did not require high voltages, some amateur radio operators continued to use vibrator supplies and dynamotors for mobile transceivers requiring high voltages although transistorized power supplies were available.

While it was possible to derive a lower voltage from a higher with a linear regulator or even a resistor, these methods dissipated the excess as heat; energy-efficient conversion only became possible with solid-state switch-mode circuits.

DC-to-DC converters are used in portable electronic devices such as cellular phones and laptop computers, which are supplied with power from batteries primarily. Such electronic devices often contain several sub-circuits, each with its own voltage level requirement different from that supplied by the battery or an external supply (sometimes higher or lower than the supply voltage). Additionally, the battery voltage declines as its stored energy is drained. Switched DC to DC converters offer a method to increase the voltage from a partially lowered battery voltage thereby saving space instead of using multiple batteries to accomplish the same thing.

DC-to-DC converters which are designed to maximize the energy harvest for photovoltaic systems and for wind turbines are called power optimizers.

Transformers used for voltage conversion at mains frequencies of 50–60 Hz must be large and heavy for powers exceeding a few watts. This makes them expensive, and they are subject to energy losses in their windings and due to eddy currents in their cores. DC-to-DC techniques that use transformers or inductors work at much higher frequencies, requiring only much smaller, lighter, and cheaper wound components. Consequently, these techniques are used even where a mains transformer could be used; for example, for domestic electronic appliances, it is preferable to rectify mains voltage to DC, use switch-mode techniques to convert it to high-frequency AC at the desired voltage, then, usually, rectify to DC. The entire complex circuit is cheaper and more efficient than a simple mains transformer circuit of the same output. DC-to-DC converters are widely used for DC microgrid applications, in the context of different voltage levels.

Practical electronic converters use switching techniques. Switched-mode DC-to-DC converters convert one DC voltage level to another, which may be higher or lower, by storing the input energy temporarily and then releasing that energy to the output at a different voltage. The storage may be in either magnetic field storage components (inductors, transformers) or electric field storage components (capacitors). This conversion method can increase or decrease voltage. Switching conversion is often more power-efficient (typical efficiency is 75% to 98%) than linear voltage regulation, which dissipates unwanted power as heat. Fast semiconductor device rise and fall times are required for efficiency; however, these fast transitions combine with layout parasitic effects to make circuit design challenges. The higher efficiency of a switched-mode converter reduces the heatsinking needed and increases the battery endurance of portable equipment. Efficiency has improved since the late 1980s due to the use of power FETs, which are able to switch more efficiently with lower switching losses at higher frequencies than power bipolar transistors and use less complex drive circuitry. Another important improvement in DC-DC converters is replacing the flywheel diode by synchronous rectification using a power FET, whose "on resistance" is much lower, reducing switching losses. Before the wide availability of power semiconductors, low-power DC-to-DC synchronous converters consisted of an electro-mechanical vibrator followed by a voltage step-up transformer feeding a vacuum tube or semiconductor rectifier, or synchronous rectifier contacts on the vibrator.

Most DC-to-DC converters are designed to move power in only one direction, from dedicated input to output. However, all switching regulator topologies can be made bidirectional and able to move power in either direction by replacing all diodes with independently controlled active rectification. A bidirectional converter is useful, for example, in applications requiring regenerative braking of vehicles, where power is supplied to the wheels while driving, but supplied by the wheels when braking.

Although they require few components, switching converters are electronically complex. Like all high-frequency circuits, their components must be carefully specified and physically arranged to achieve a stable operation and to keep switching noise (EMI / RFI) at acceptable levels. Their cost is higher than linear regulators in voltage-dropping applications, but their cost has been decreasing with advances in chip design.

Linear regulators which are used to output a stable DC independent of input voltage and output load from a higher but less stable input by dissipating excess volt-amperes as heat could be described literally as DC-to-DC converters, but this is not usual usage. (The same could be said of a simple voltage dropper resistor, whether or not stabilized by the following voltage regulator or Zener diode.)

There are also simple capacitive voltage doubler and Dickson multiplier circuits using diodes and capacitors to multiply a DC voltage by an integer value, typically delivering only a small current.

A converter where the output voltage is lower than the input voltage (such as a buck converter).

A converter that outputs a voltage higher than the input voltage (such as a boost converter).

Current and thus the magnetic field in the inductive energy storage may reach or cross zero.

These may include a power control IC, coil, capacitor, and resistor; decreases mounting space with a small number of components in a single integrated solution.

The input voltage may have non-negligible noise. Additionally, if the converter loads the input with sharp load edges, the converter can emit RF noise from the supplying power lines. This should be prevented with proper filtering in the input stage of the converter.

The output of an ideal DC-to-DC converter is a flat, constant output voltage. However, real converters produce a DC output upon which is superimposed some level of electrical noise. Switching converters produce switching noise at the switching frequency and its harmonics. Additionally, all electronic circuits have some thermal noise. Some sensitive radio-frequency and analog circuits require a power supply with so little noise that it can only be provided by a linear regulator. Some analog circuits which require a power supply with relatively low noise can tolerate some of the less noisy switching converters, e.g. using continuous triangular waveforms rather than square waves. 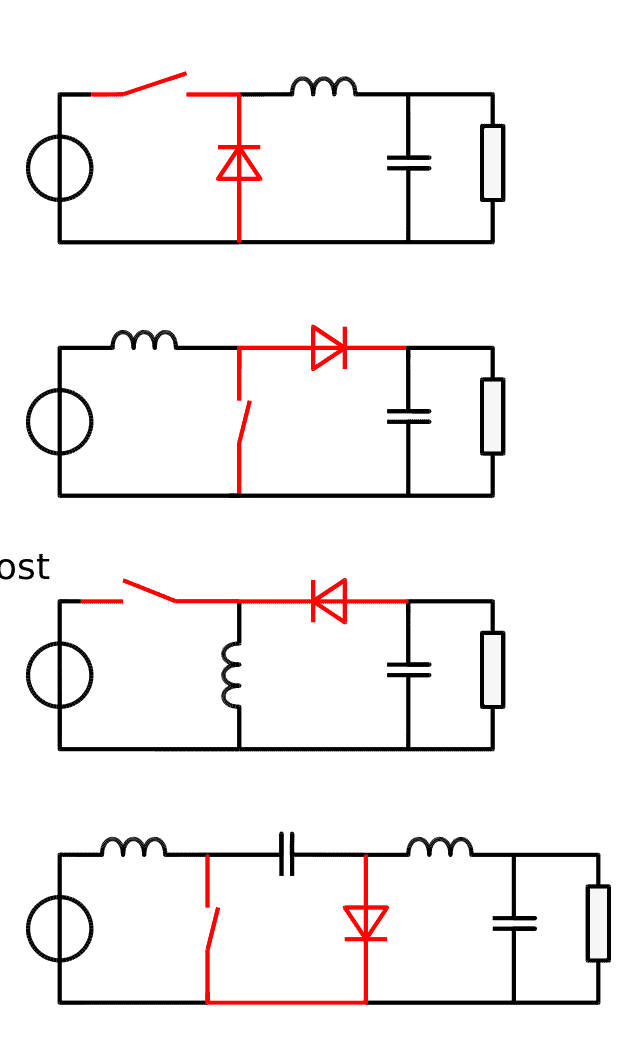