De-essing (also desibilizing) is any technique intended to reduce or eliminate the excessive prominence of sibilant consonants, such as the sounds normally represented in English by "s", "z", "ch", "j" and "sh", in recordings of the human voice. Sibilance lies in frequencies anywhere between 2–10 kHz, depending on the individual voice.

Excess sibilance can be caused by compression, microphone choice and technique, and even simply the way a person's mouth anatomy is shaped. Ess sound frequencies can be irritating to the ear, especially with earbuds or headphones, and interfere with an otherwise modulated and pleasant audio stream.

In the current digital stronghold of audio production, the most commonly used tool for taming excessive sibiliance is a de-esser plugin. A dynamic equalizer can be used to achieve the same effects as a de-esser, however, plugin manufacturers have tailored these tools to operate efficiently within the mid-high to high frequencies.

A de-essing plugin will compress the desired signal according to the amplitude of the selected frequency as it passes over a preset threshold. In the case of excessive sibilance anywhere from 4-10k will often be where the problem resides. Certain plugins will allow you to shape the envelope of the compression to achieve a more musical effect.

Over de-essing can result in the over manipulation of transients resulting in the softening or hardening of certain consonants, yielding undesirable effects.

De-essing is a dynamic audio editing process, only working when the level of the signal in the sibilant range (the ess sound) exceeds a set threshold. De-essing temporarily reduces the level of high frequency content in the signal when a sibilant ess sound is present. De-essing differs from equalization, which is a static change in level among many frequencies. However, equalization of the ess frequencies alone can be manipulated to reduce the level of sibilance.
Side-chain compression or broadband de-essing

With this technique, the signal feeding the side-chain of a dynamic range compressor is equalized or filtered so that the sibilant frequencies are most prominent. As a result, the compressor only reduces the level of the signal when there is a high level of sibilance. This reduces the level over the entire frequency range. Because of this, attack and release times are extremely important, and threshold settings cannot be placed as low as with other types of de-essing techniques without experiencing more blatant sound artifacts.

The original signal can either be split into high (sibilant) and low frequencies, or split so that the frequencies both below and above the sibilance are untouched. This technique is similar to multi-band compression.

A more recent method of de-essing involves automation of the vocal level in a digital audio workstation (DAW). Whenever problematic sibilance occurs the level can be set to follow automation curves that are manually drawn in by the user.

This method is made feasible by editing automation points directly, as opposed to programming by manipulating gain sliders in a write-mode. An audio engineer would not be able to react fast enough to precisely reduce and restore vocal levels for the brief duration of sibilants during real-time playback.
De-essing without automation or with manual equalization
Highlighted the frequency of the ess in the spoken word "instantly" on an audio editing timeline
Equalization curve lowering the decibels of an ess frequency range for a human voice

Audio editing software, whether professional or amateur software such as Audacity, can use the built-in equalization effects to reduce or eliminate sibilance ess sounds that interfere with a recording. Described here is a common method with Audacity. The process is in two phases: 1) analyze the frequency of the voice's ess sound by sampling several instances and calculating the range of ess frequencies, which most likely fall between 4,000-10,000 Hz depending on the speaker, then 2) apply an equalization effect to quiet the determined frequency band by -4 dB to -11db during ess frequency events. 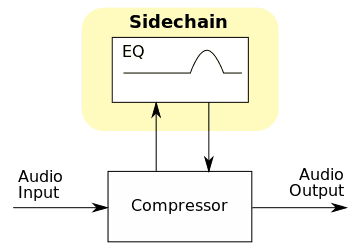