The process of converting interlaced video into a non-interlaced form.

Deinterlacing is the process of converting interlaced video, such as common analog television signals or 1080i format HDTV signals, into a non-interlaced form.

An interlaced video frame consists of two sub-fields taken in sequence, each sequentially scanned at odd, and then even, lines of the image sensor. Analog television employed this technique because it allowed for less transmission bandwidth and further eliminated the perceived flicker that a similar frame rate would give using progressive scan. CRT-based displays were able to display interlaced video correctly due to their complete analogue nature. Newer displays are inherently digital, in that the display comprises discrete pixels. Consequently, the two fields need to be combined into a single frame, which leads to various visual defects. The deinterlacing process should try to minimize these.

Deinterlacing has been researched for decades and employs complex processing algorithms; however, consistent results have been very hard to achieve.

Both video and photographic film capture a series of frames (still images) in rapid succession; however, television systems read the captured image by serially scanning the image sensor by lines (rows). In analog television, each frame is divided into two consecutive fields, one containing all even lines, another with the odd lines. The fields are captured in succession at a rate twice that of the nominal frame rate. For instance, PAL and SECAM systems have a rate of 25 frames/s or 50 fields/s, while the NTSC system delivers 29.97 frames/s or 59.94 fields/s. This process of dividing frames into half-resolution fields at double the frame rate is known as interlacing.

Since the interlaced signal contains the two fields of a video frame shot at two different times, it enhances motion perception to the viewer and reduces flicker by taking advantage of the persistence of vision effect. This results in an effective doubling of time resolution as compared with non-interlaced footage (for frame rates equal to field rates). However, interlaced signal requires a display that is natively capable of showing the individual fields in a sequential order, and only traditional CRT-based TV sets are capable of displaying interlaced signal, due to the electronic scanning and lack of apparent fixed resolution.

Most modern displays, such as LCD, DLP and plasma displays, are not able to work in interlaced mode, because they are fixed-resolution displays and only support progressive scanning. In order to display interlaced signal on such displays, the two interlaced fields must be converted to one progressive frame with a process known as de-interlacing. However, when the two fields taken at different points in time are re-combined to a full frame displayed at once, visual defects called interlace artifacts or combing occur with moving objects in the image. A good deinterlacing algorithm should try to avoid interlacing artifacts as much as possible and not sacrifice image quality in the process, which is hard to achieve consistently. There are several techniques available that extrapolate the missing picture information, however they rather fall into the category of intelligent frame creation and require complex algorithms and substantial processing power.

Deinterlacing techniques require complex processing and thus can introduce a delay into the video feed. While not generally noticeable, this can result in the display of older video games lagging behind controller input. Many TVs thus have a "game mode" in which minimal processing is done in order to maximize speed at the expense of image quality. Deinterlacing is only partly responsible for such lag; scaling also involves complex algorithms that take milliseconds to run.

Interlaced video can carry progressive scan signal, and deinterlacing process should consider this as well.

Typical movie material is shot on 24 frames/s film; when converting film to interlaced video using telecine, each film frame can be presented by two progressive segmented frames (PsF). This format does not require complex deinterlacing algorithm because each field contains a part of the very same progressive frame. However, to match 50 field interlaced PAL/SECAM or 59.94/60 field interlaced NTSC signal, frame rate conversion should be performed using various "pulldown" techniques; most advanced TV sets can restore the original 24 frame/s signal using an inverse telecine process. Another option is to speed up 24-frame film by 4% (to 25 frames/s) for PAL/SECAM conversion; this method is still widely used for DVDs, as well as television broadcasts (SD & HD) in the PAL markets.

DVDs can either encode movies using one of these methods, or store original 24 frame/s progressive video and use MPEG-2 decoder tags to instruct the video player on how to convert them to the interlaced format. Most movies on Blu-ray discs have preserved the original non interlaced 24 frame/s motion film rate and allow output in the progressive 1080p24 format directly to display devices, with no conversion necessary.

Some 1080i HDV camcorders also offer PsF mode with cinema-like frame rates of 24 or 25 frame/s. The TV production can also use special film cameras which operate at 25 or 30 frame/s; such material does not need framerate conversion for broadcasting in the intended video system format.

Deinterlacing requires the display to buffer one or more fields and recombine them into full frames. In theory this would be as simple as capturing one field and combining it with the next field to be received, producing a single frame. However, the originally recorded signal was produced as a series of fields, and any motion of the subjects during the short period between the fields is encoded into the display. When combined into a single frame, the slight differences between the two fields due to this motion results in a "combing" effect where alternate lines are slightly displaced from each other.

There are various methods to deinterlace video, each producing different problems or artifacts of its own. Some methods are much cleaner in artifacts than other methods.

Most deinterlacing techniques can be broken up into three different groups all using their own exact techniques. The first group are called field combination deinterlacers, because they take the even and odd fields and combine them into one frame which is then displayed. The second group are called field extension deinterlacers, because each field (with only half the lines) is extended to the entire screen to make a frame. The third type uses a combination of both and falls under the banner of motion compensation and a number of other names.

Modern deinterlacing systems therefore buffer several fields and use techniques like edge detection in an attempt to find the motion between the fields. This is then used to interpolate the missing lines from the original field, reducing the combing effect. 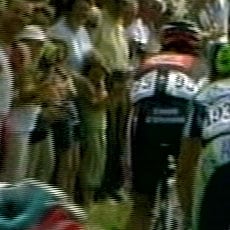